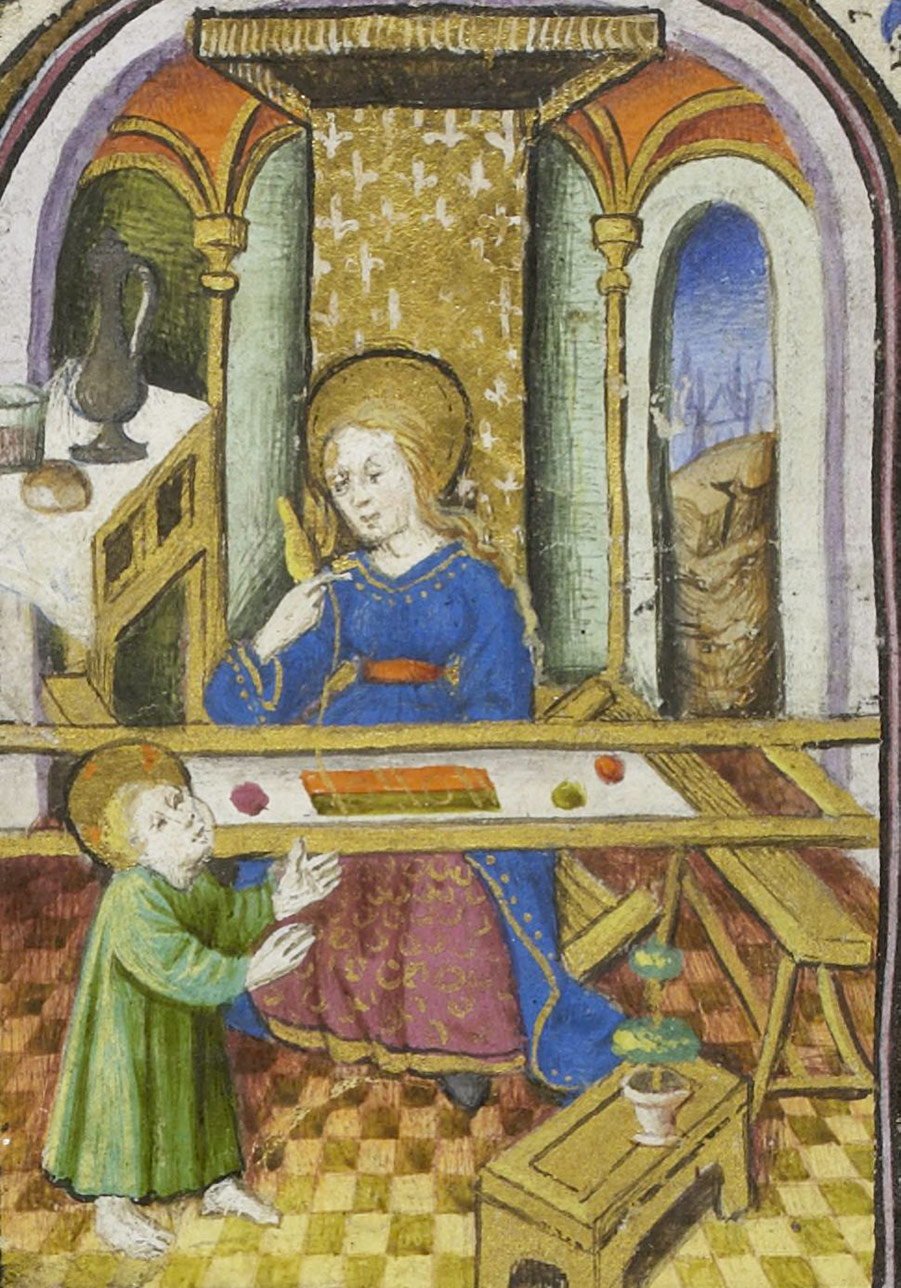 Bénédicte Meffre writes a fascinating blog (in French), with a wealth of information on the history of embroidery. We are sharing here her article about Embroidery slates. (We will translate her article on Tambours for embroidery very soon). 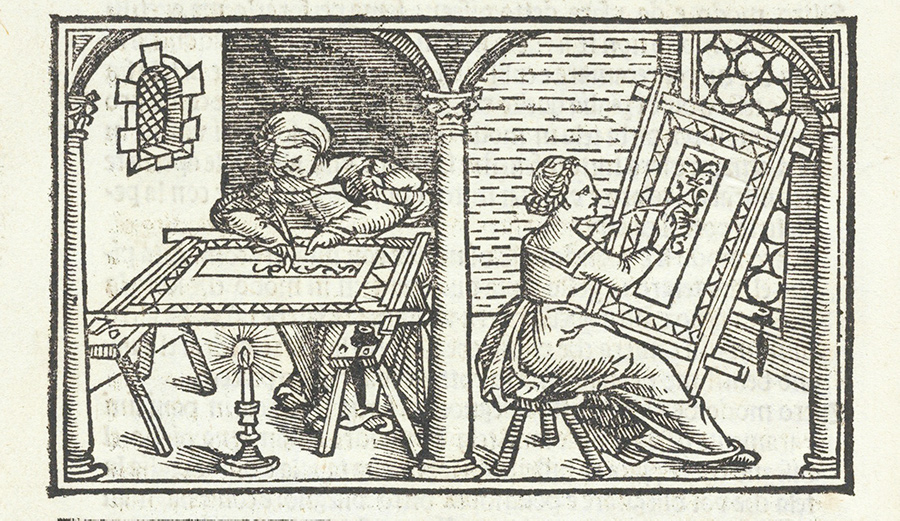 An embroidery slate is used to tighten a fabric before it is stitched. Some stitches can be created on a loose fabric, but for other techniques, we need to have a tight fabric. When I recreated a medieval embroidery workshop and during my historical research, the question became important: what kind of slate were there? What shapes did they have? How were they made?
I went through many books and resources to get a vision on what type of slates were used over the centuries. I have stopped my research to the 18th century as this coincide with the arrival of Tambours hoops (which I will talk about in another article).

Most of my sources are illustrations. We can see through them when a particular tool was used. But they are not enough: details can be sketchy or missing, many of the tools used were not depicted and it can be difficult to identify a slate or a technique with certainty.
I therefore also studied books which gives more information about what was happening at a certain time. We have books on painting as well as on embroidery that can be a great source for us. Lastly, for the early times for which we do not have images or texts, we can gather interesting knowledge by looking at the embroideries themselves.

Definition
An embroidery slate is a slate that can be either fixed over trestles or has an independent foot. Fabric is tightly secured over it. The simplest ones are fixed wooden bars. Others have different systems to hold the fabric and to regulate its tension. Those techniques can change a lot from one place to another and from one time to the next, or even depending on the embroidery technique used. It is rather difficult to have a thorough description of all of them.

Middle-Ages
The first illustrations that I could find of embroiderers working over a frame are from the end of the Middle-Ages. This illumination dates from the 14th century. It gives very little details so it is difficult to be sure that it depicts a stitcher at work, but it does come from the catalogue called  English Medieval Embroidery – Opus Anglicanum from the British Library.

In this representation of the Virgin Mary and child Jesus, we can clearly see a frame fixed on trestles. The Bibliothèque Nationale de France describes this slate as a tapestry slate, which was a tool frequently used in such a scene. But the slate is horizontally disposed and there seems to be a drawing on top, which tends towards an embroidery work. On the other hand, Mary holds what looks like a tapestry tool in here right hand, with spools of threads in front of her, which looks like tapestry tools. Whereas it is a representation of a tapestry or an embroidery slate, it is still a very interesting addition to our study.

In this painting by Francesco Del Cossa of the Triumph of Minerva (circa 1470), we have definitely a real representation of an embroidery slate. Details are not numerous, but we can still see that the slate is assembled with mortises and is held with plugs. 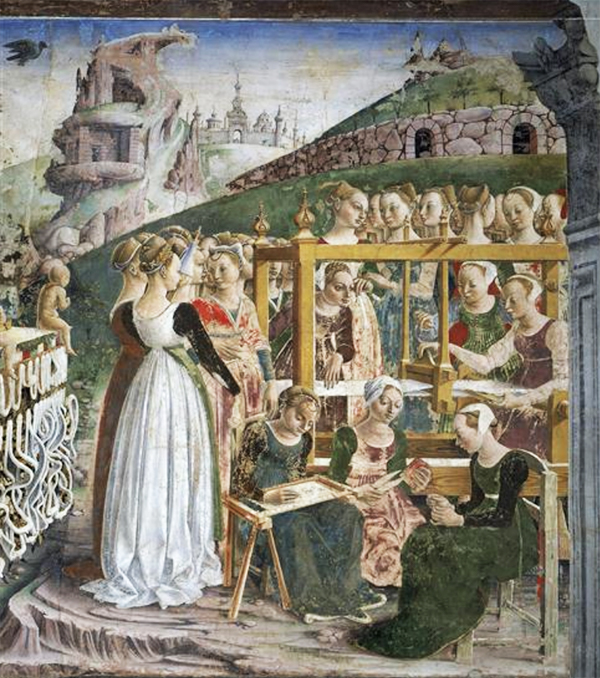 We have a book on the art of painting written at the end of the 14th century by Cennino Cennini (Le Libro dell’Arte) which provides us with some clues about an embroidery slate. The book has a chapter on how to draw figures for embroiderers. I have illustrated this method in this article. Cennini mentions that it is important that the embroiderer himself must fix his fabric to the slate.

Before the 14th century, which marks the end of the Middle Ages, how can we know how the fabric was stretched? We can get some clues from the works themselves. Some stitches (like the chain stitch, the split stitch, and even some couching) do not need to be worked on a tight fabric. But, when the work becomes rather big, it might be difficult to work without a slate. 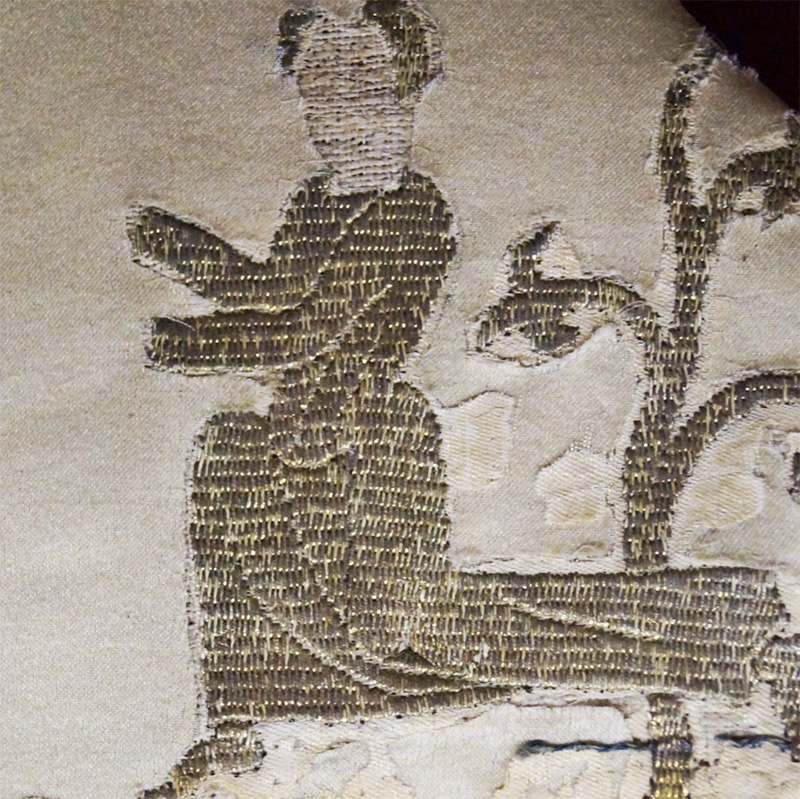 Couching was a very important technique in the Middle-Ages with many types of stitches used. And almost all of them require a tight fabric. We have the Bayeux stitch, the convent stitch, the couching stitch, the underside couching where gold and silver thread where used. On very small work, a slate might not be necessary if you are not using metal threads, but with metal threads, you need to work on a tight fabric. On this mitre from the 13th century, the length of the metal threads couldn’t not have looked so straight without a frame.

Nonetheless, there are rare representations of stitchers at work, with or without a frame. So, it is difficult to ascertain which technique was commonly used. We do have a few illuminations like this Holy Family from a Spanish book from the 15th century that shows a woman at home, stitching without a frame. Sometimes, the artists used only one or two tools to indicate a whole profession, tools that his contemporaries would have recognized immediately and associated with one technique – association that is harder for us to make.

The Holly family, Spanish illumination from the 15th century 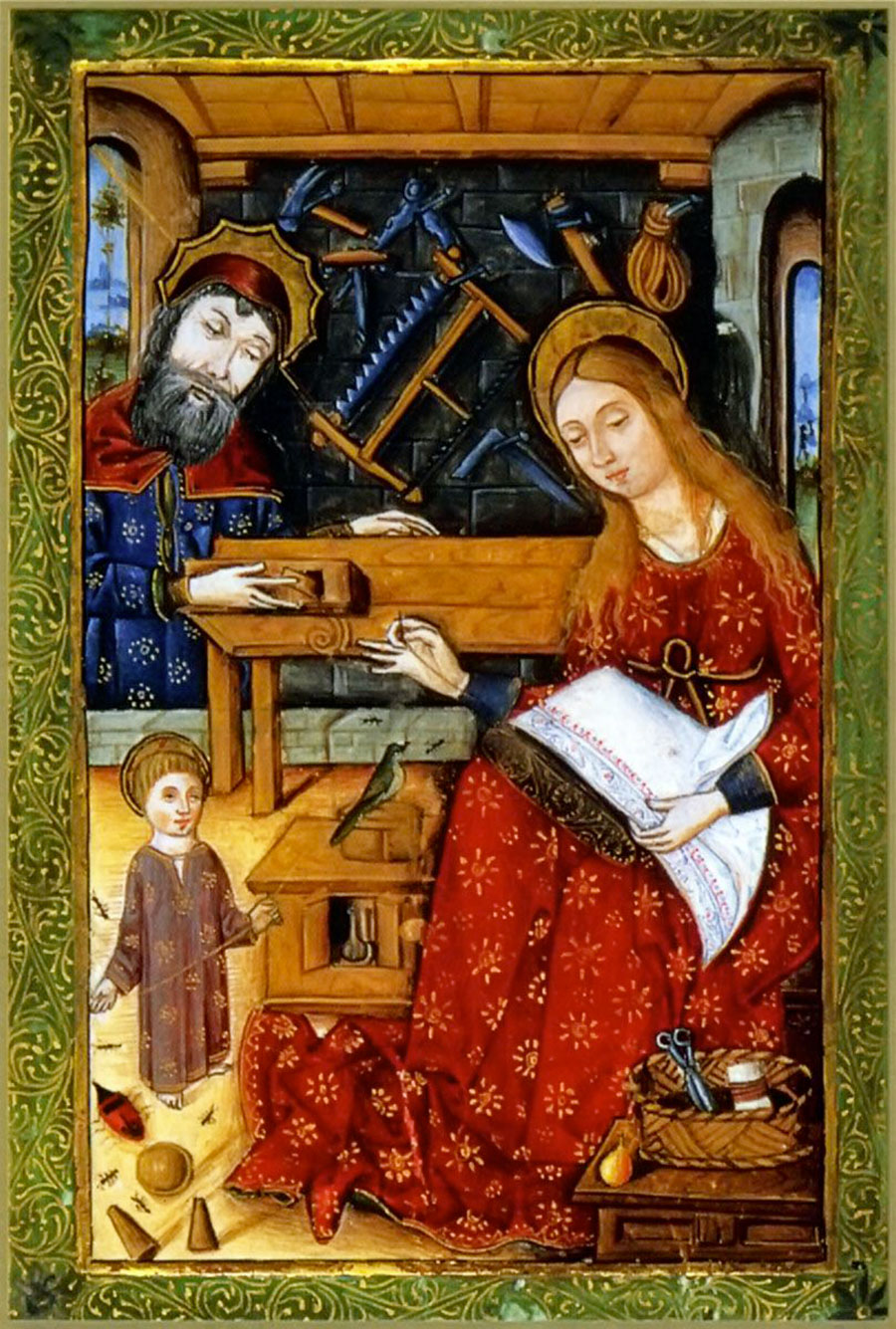 Renaissance
From the 16th century onward, we have more and more representations of stitchers at work. We even have engravings showing us many details of the workshops of professional embroiderers. We can see tools and even how the workshops were organized.

On this page from a book proposing embroidery patterns, we can see 4 women transferring their patterns, using different methods. On the upper part, both are working on stretched fabrics, one is using a candle and the other the daylight. Both frames seem to have the same construction as on The Triumph of Minerva, with mortises and plugs.  Here it is clearer how the fabric has been stretched: a strong thread goes from the fabric to the slates and back on the fabric regularly (or through holes, or via a hidden mechanism, the engraving does not show those details). 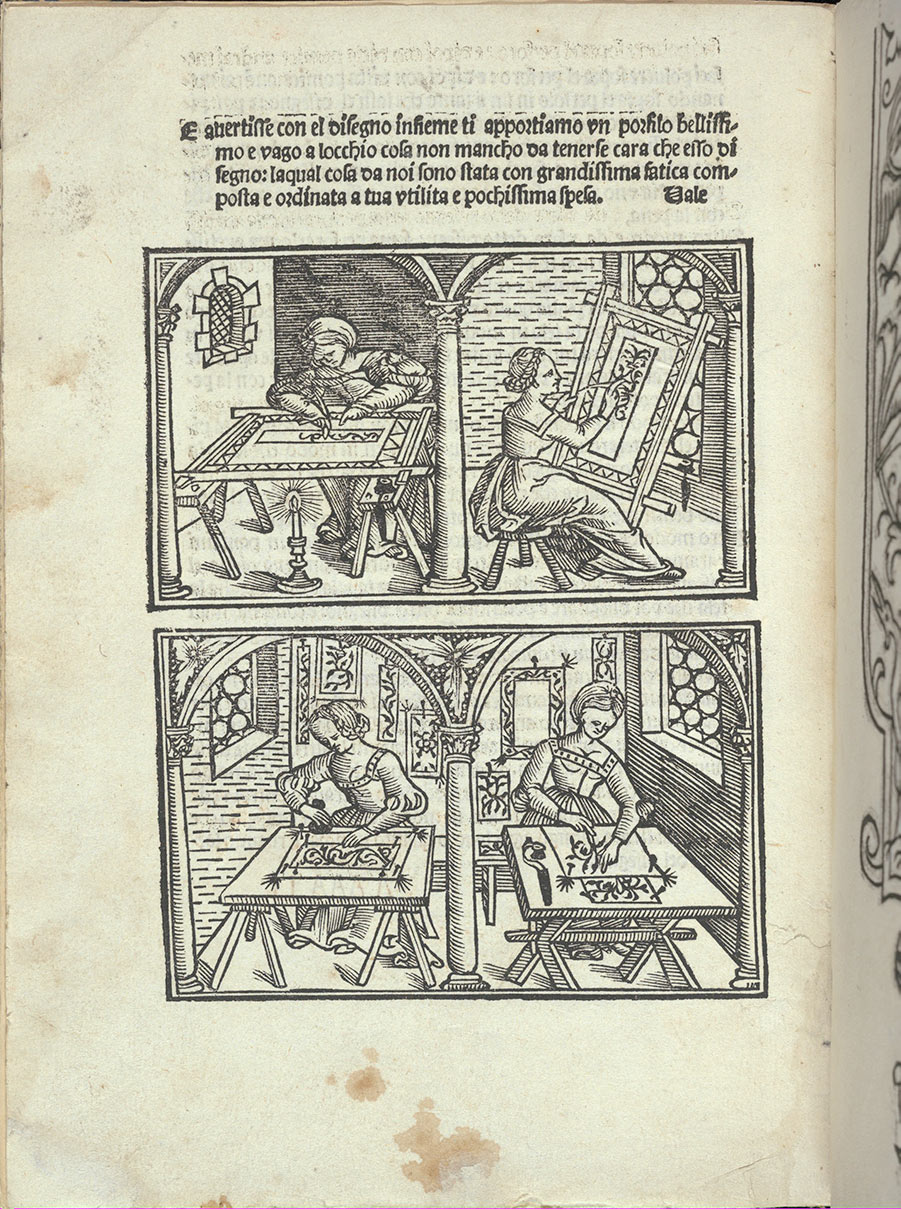 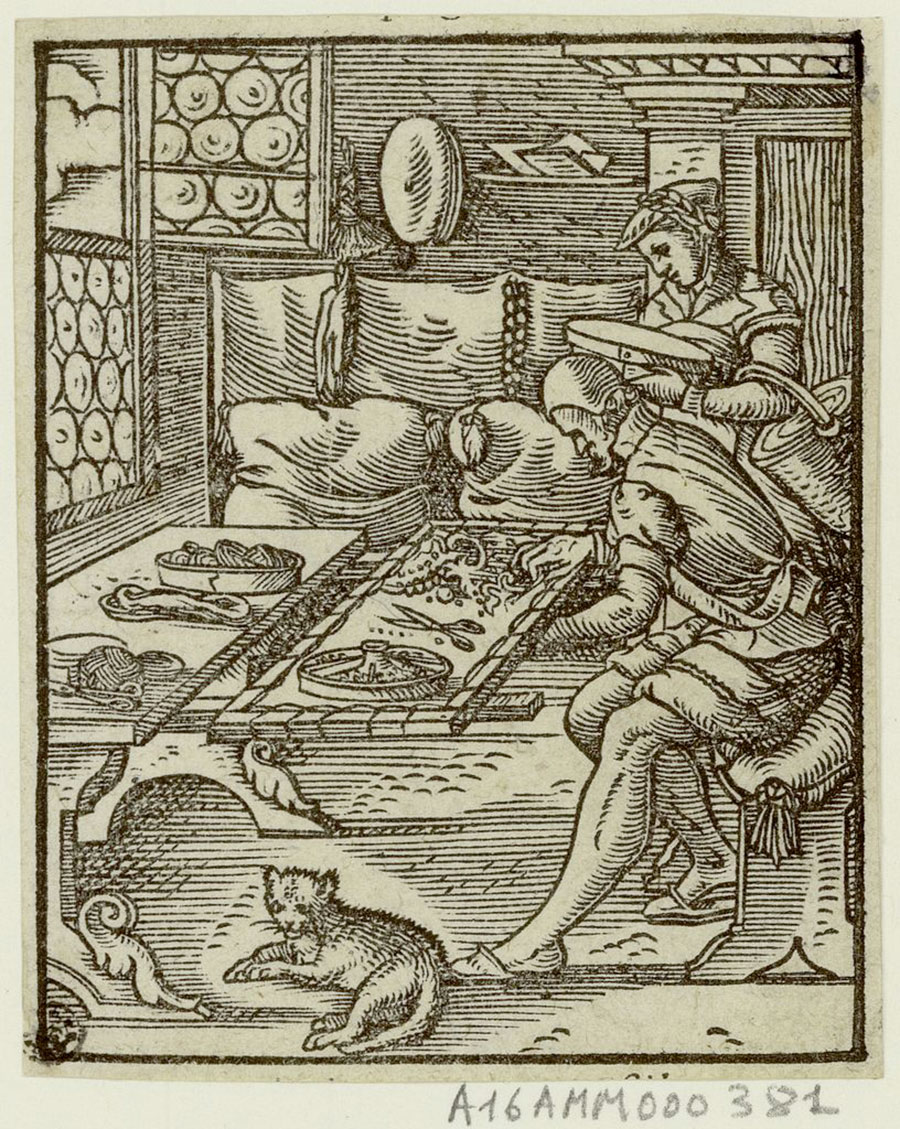 Here we can see the stitcher at his work, by a window. Daylight is, obviously, a very important part of any embroiderer shop and you will always have a window present in each representation. By the master stitcher is an apprentice, learning his trade. Here again, the engraving doesn’t show enough details to know every tool, but the slate seems to have the same construction as seen before.

The silk embroiderers, engraving by Christoph Weigel the Elder, from the Ständeburch, 1698 / Public domain

Here we see another stitcher working (the fact that this is a man working means that this is a professional workshop). His slate is put on a sort of table that looks like it was made just for this purpose. He is surrounded by his tools and material. A woman is on the background, busy with less demanding tasks, such as tiding the workshop or preparing the threads. This time the frame doesn’t seem to include mortises and plugs (which allows for different size of fabric). But we can clearly see the thread that holds the fabric to the frame going around the posts. 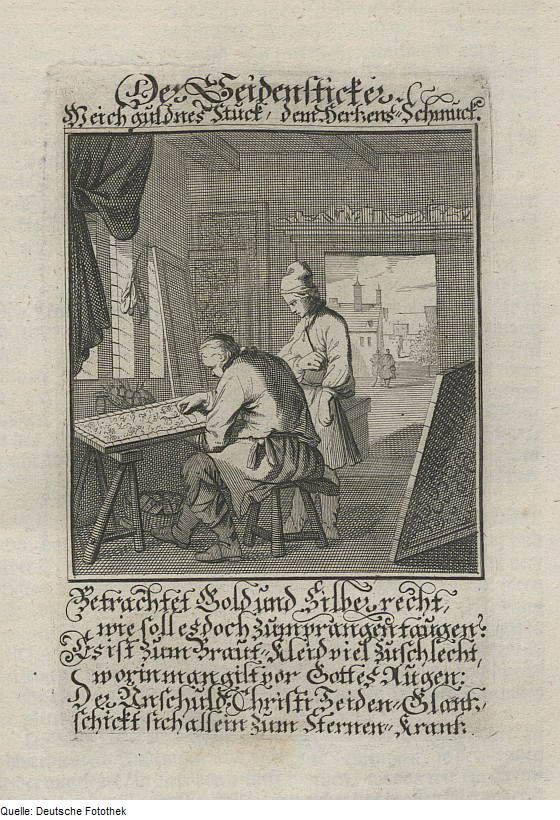 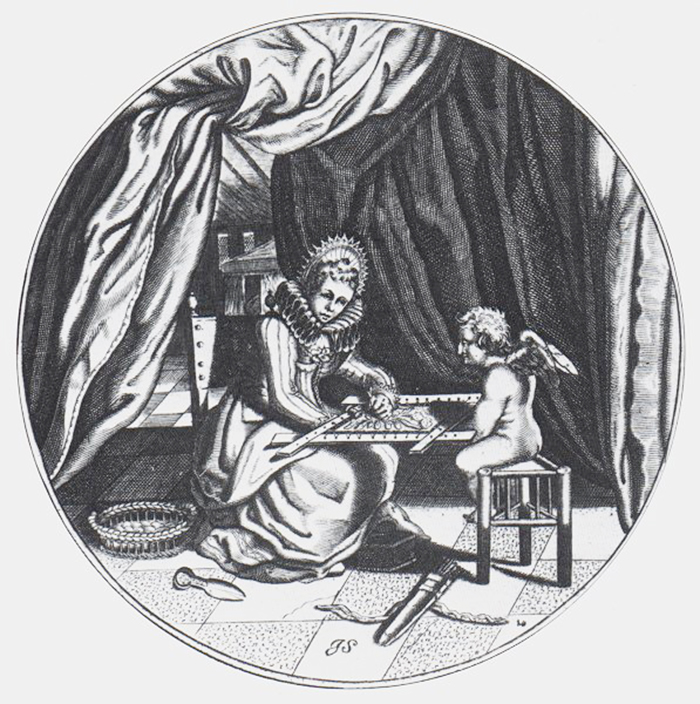 18th century
During this century, two major books are published concerning directly or indirectly our theme: The Encyclopedia written by Diderot and d’Alembert (1751-1772), and the Art of the Embroiderer, by Monsieur de Saint-Aubin (1770). In both books, we find representations of workshops and home embroidery. Because of their encyclopedic nature, the plates give many details on the construction of the frames, and how to use them.
The frames can be adjusted in their width thanks to a system of pins or nails plunged in holes made on the stretcher bars (the flat bars that enter into the roller bars). Now the fabric is not directly fixed to the frame, but another fabric (a braid or webbing) is sewn on the fabric. The lacing cord goes through it before being fixed at the bars. We still use this system today.

In The Art of the embroiderer, the mounting of the fabric on the frame is precisely explained, as well as how a workshop should be organized with the position of a left-hand or right-hand stitcher. 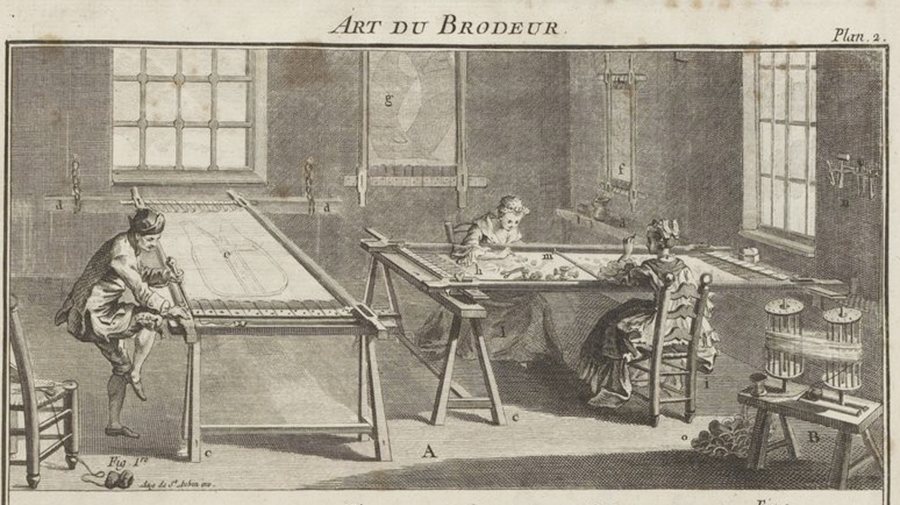 In the Encyclopedia, the description is a little less detailed but still appear clear:

The plates represent the workshop of an embroiderer.
Fig.1 The lady holds a slate with a tight fabric in position. This slate is composed of 2 roller bars a a and two stretcher bars b b; in c we can see the fabric where the pattern has been transferred for a vest to be embroidered.
Before stretching the fabric on the slate, you need to sew a webbing tape around the fabric. It is this tape that will be sewn to the bars via a lacing cord that will go around the bars, in order to prevent any damage to the fabric.

2. A woman stitching; her slate is put horizontally on a trestle a, and in b on a wooden shelf that goes all along the window still, to receive as many slates as possible.
The right hand of the stitcher is on top of the fabric to receive the needle from the left hand, which is underneath.
When the stitcher cannot stitch anymore, she rolls the fabric to the roller bars – see below.
3. Roller bars. Each bar is a wooden round pole from a to b, with a webbing tape fixed to it c. Each extremity is squared and is named the head. Each is hollowed to let the stretcher bars in as seen in fig.1. The length of the bars is not determined. It depends on the width of the work to be done.
4. Stretcher bar – it is used to pull the fabric tight thanks to pegs of metal that are fixed to its holes. We can see the pegs in fig. 1, d d d d.
5. Metal pegs used to stretch the frame
6. Metal needle used to fix the lacing cord (a) through the webbing tape. See fig. 1 e e. 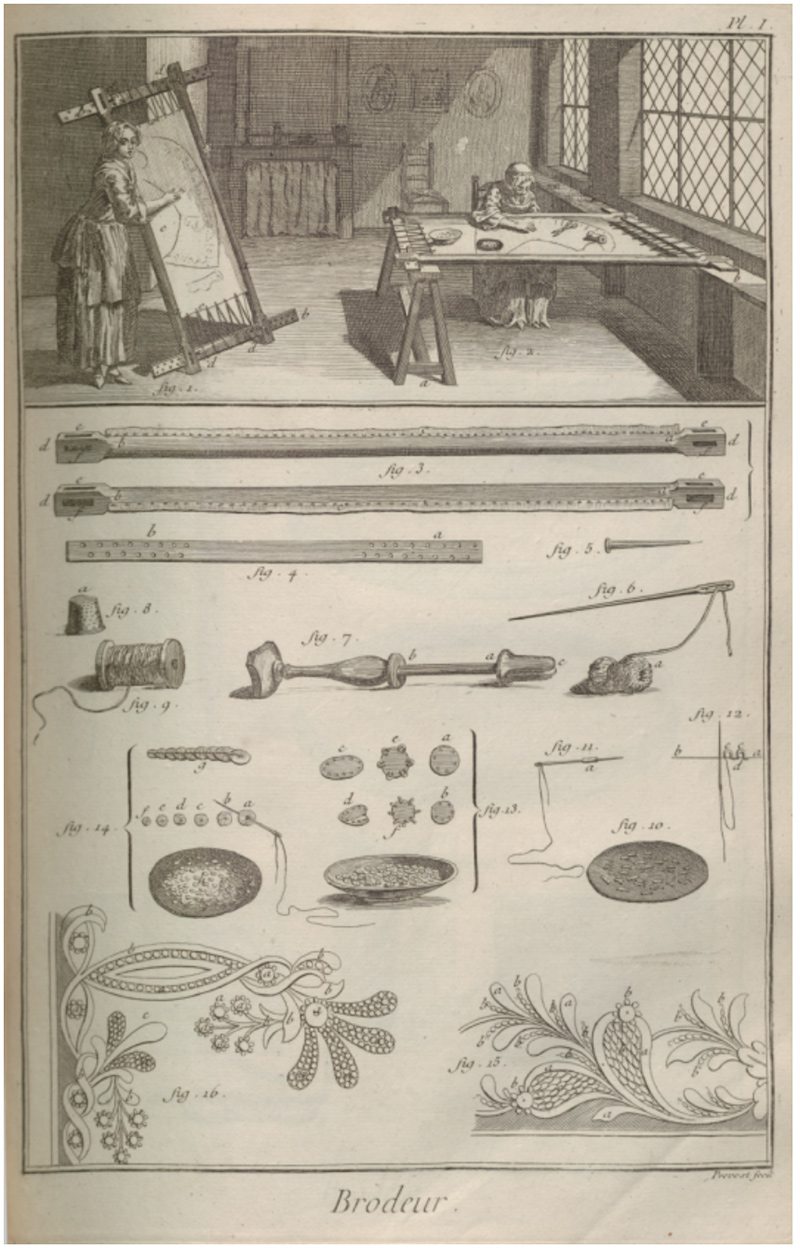 The embroiderer from the Encyclopedia, by Diderot © ARTFL Encyclopédie

Perspectives
This article took some years of research on historical embroidery. When I was reconstructing an embroiderer workshop, it felt necessary to have my facts right. It felt quite mandatory to add accurate tools while giving courses on medieval embroidery. Tools are a very important part of the study of the material culture of our live history.

I have tried to determine when the first slates where used and what shape they had. It is very difficult to give a precise date as they have been used long before they were reproduced in the arts. Before the Renaissance, it is hard to know the details of its construction, beside its general shape. We have to wait until the 18th century to have clear and precise descriptions. The Art of the embroiderer is a wonderful resource on that matter.
I have created a Pinterest board on frames and tambours for embroidery, that I will keep up-dated. You will find all sorts of illustrations of those frames. If a new source can be found, I will up-date this article too.