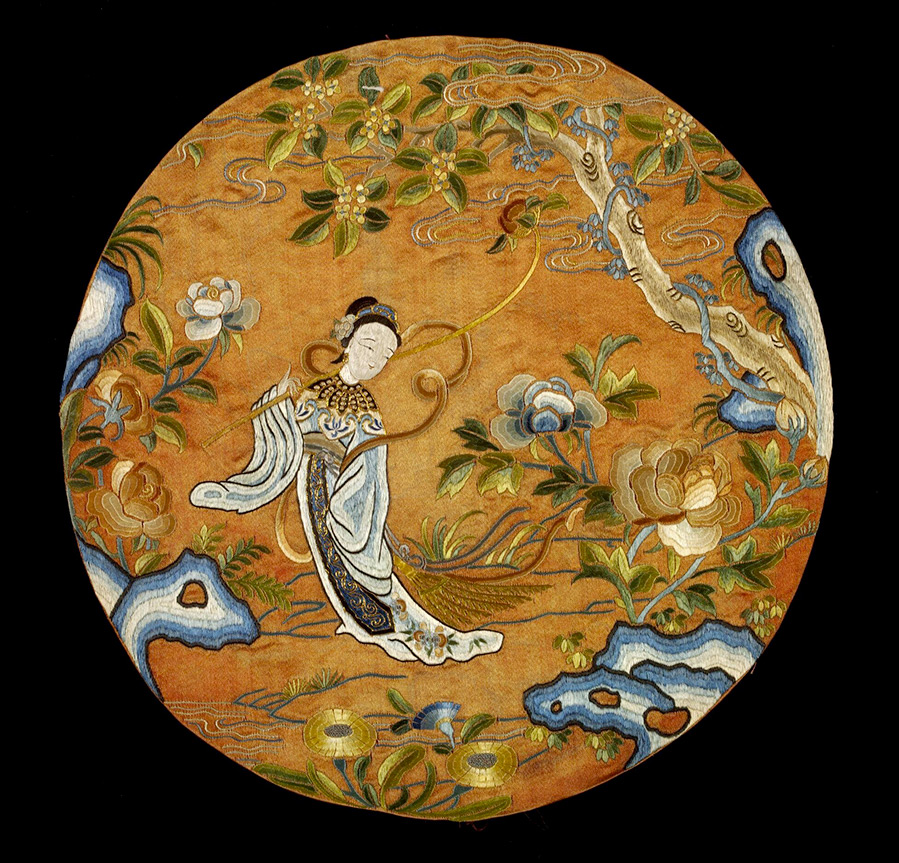 The Victoria and Albert Museum has a fine collection of 8 embroidered roundels, sewn in the 19th century (Qing dynasty) with flat silk threads over a red satin weave silk, using straight and stem stitches and small knots. A few gold threads are also couched here and there.

Each of these embroidered roundels represents one of the Eight Immortals of the Taoist tradition. They are figures for good luck.This group of semi-mythical figures is a favorite subject in China and began to appear regularly on all types of objects in the 14th century.
The Eight Immortals are the gods who punish evildoers and encourage people to do good, help those in distress and those in danger. There are a lot of folk tales about them. In accordance with the Taoist quest, they unraveled the secrets of nature and attained eternal life. These immortals loved mountainous and isolated places.

It says that the Eight Immortals represent male, female, the old, the young, the rich, the noble, the poor, and the humble Chinese.
The “Eights” are not always represented together. Sometimes only the personal emblems they wear are depicted. The talismans they use, called the Eight Hidden Immortals, all have some meaning.

Some of these emblems can be seen on other textiles. They are not always easy to spot as they are often part of a large repertoire of decorative shapes and do not always look like the original shapes. In China, the color red is used on happy occasions. The color of these medallions faded with age to turn orange. The roundels are the shape and size of pillows sides (25 cm in diameter) but we don’t know if that was what they were used for. The careful embroidery, with each figure framed by a different landscape setting, is mostly done in flat silk thread. This gives the designs a soft shine when they catch the light. 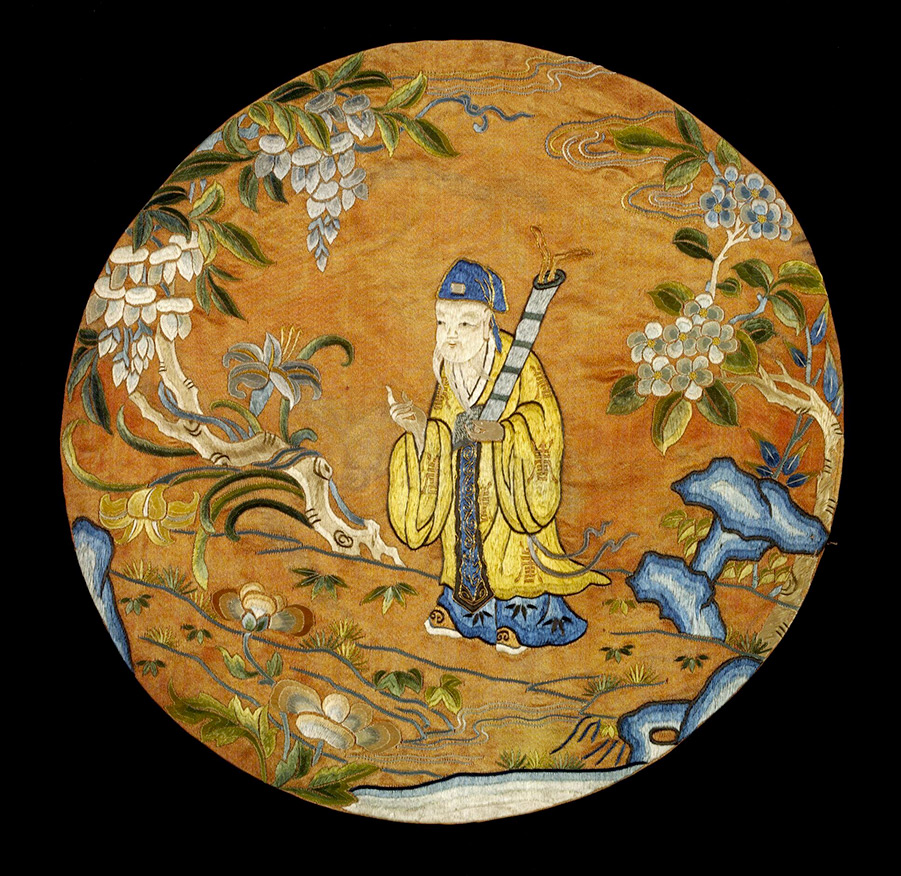 This medallion represents Zhang Guolao, who is sometimes also depicted riding a donkey. Here in his arms he carries his identification instrument, a bamboo tube with two stems known as yugu. The percussion produced by the yugu is believed to facilitate divination and help predict the future. A taoist master, Zhang Guolao is the patron of painters and his mission is to help those who are trying to have a child.

Here we have Zhong Liquan (sometimes also known as Han Zhongli), a general from the Han Dynasty. His instrument of identification is a fan of banana leaves, which he uses to bring the dead back to life. 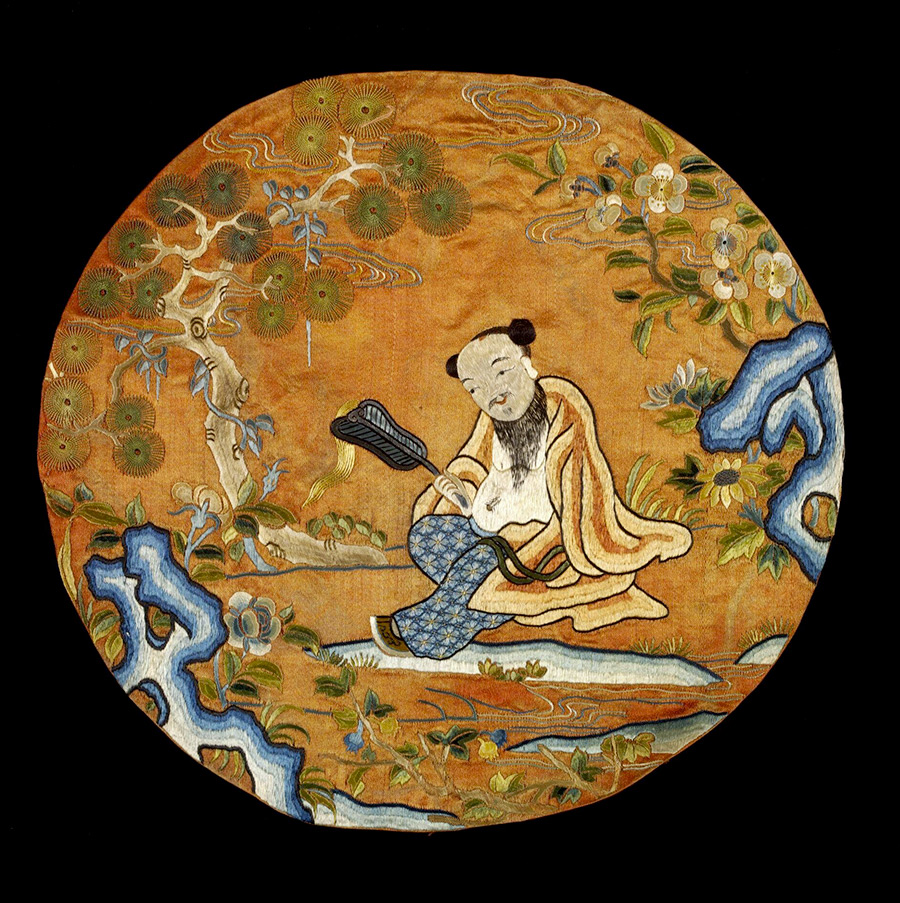 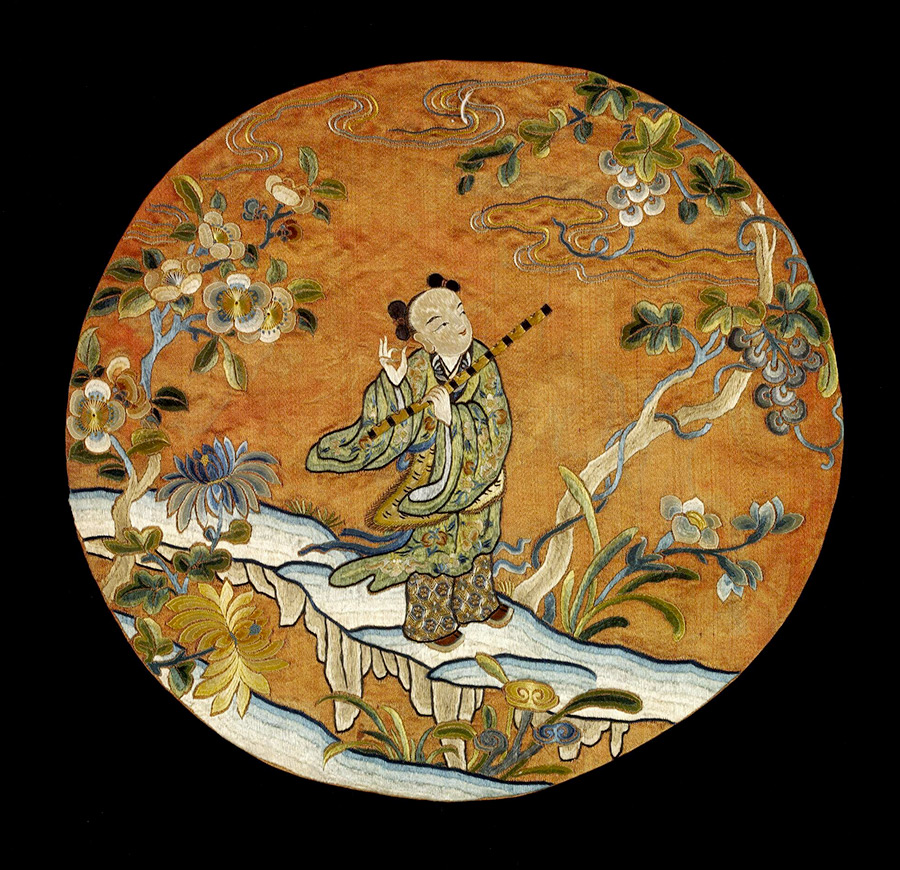 This roundel represents Han Xiangzi, nephew of the scholar Han Yu. He is identified with a bamboo flute. The music produced by this flute brings nature to life. He is the patron of musicians.

This is He Xiangu. The only woman among the Eight, she is usually depicted wearing a long-stemmed lotus flower. This flower improves mental and physical health through meditation. In this embroidery, however, the flower at the end of the stem does not appear to be a lotus. He Xiangu symbolises family and marriage. 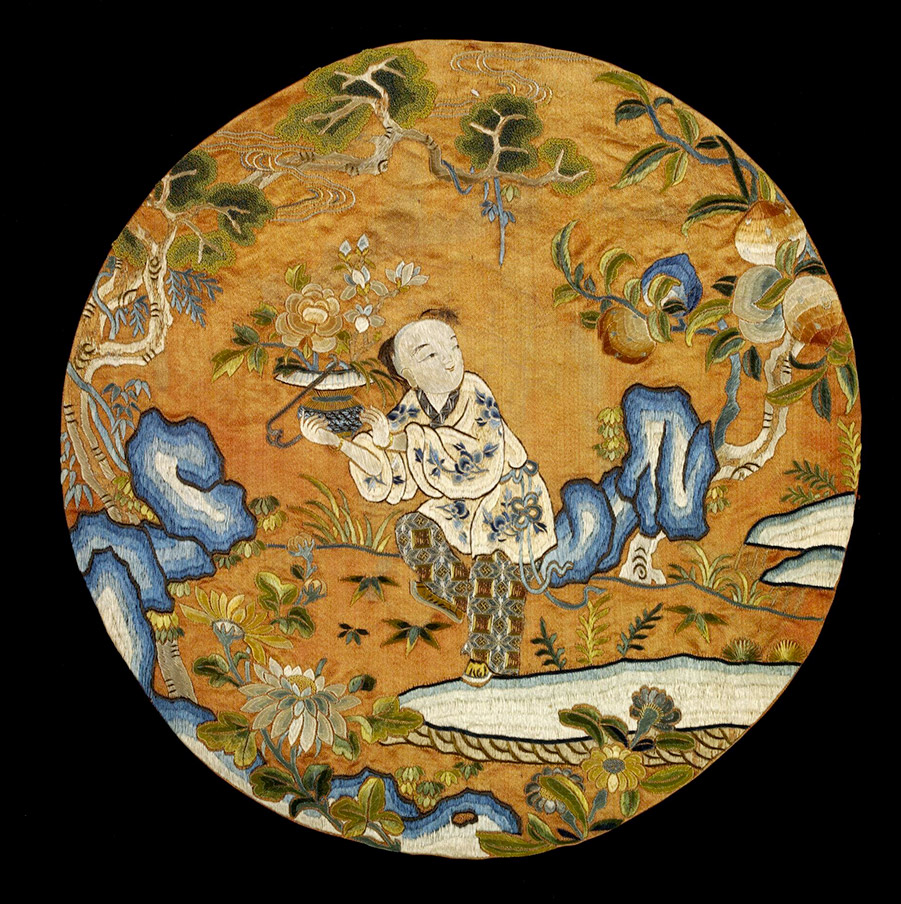 On this medallion we find Lan Caihe. He is usually identified with a basket of life-saving flowers and medicinal herbs, although here (and often in other places) you only see flowers. This basket allows him to communicate with the gods. Lan Caihe is often depicted in the image of a beggar, wearing only one shoe, while here both his feet are protected. He symbolises joy.

This medallion represents Li Tieguai. His name literally means “Li with the Iron Crutch,” which is one of the objects with which he is identified. He also carries a gourd, supposed to contain vital essences (or alcohol …) to help the needy and relieve those in distress. He symbolises money and health. 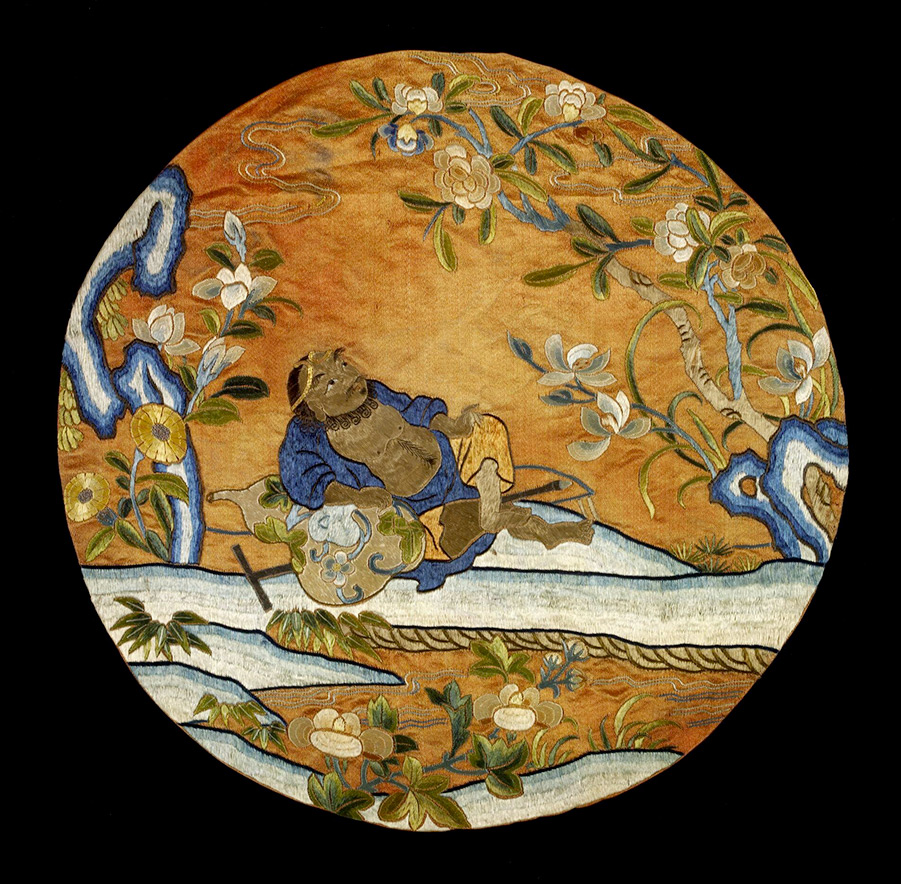 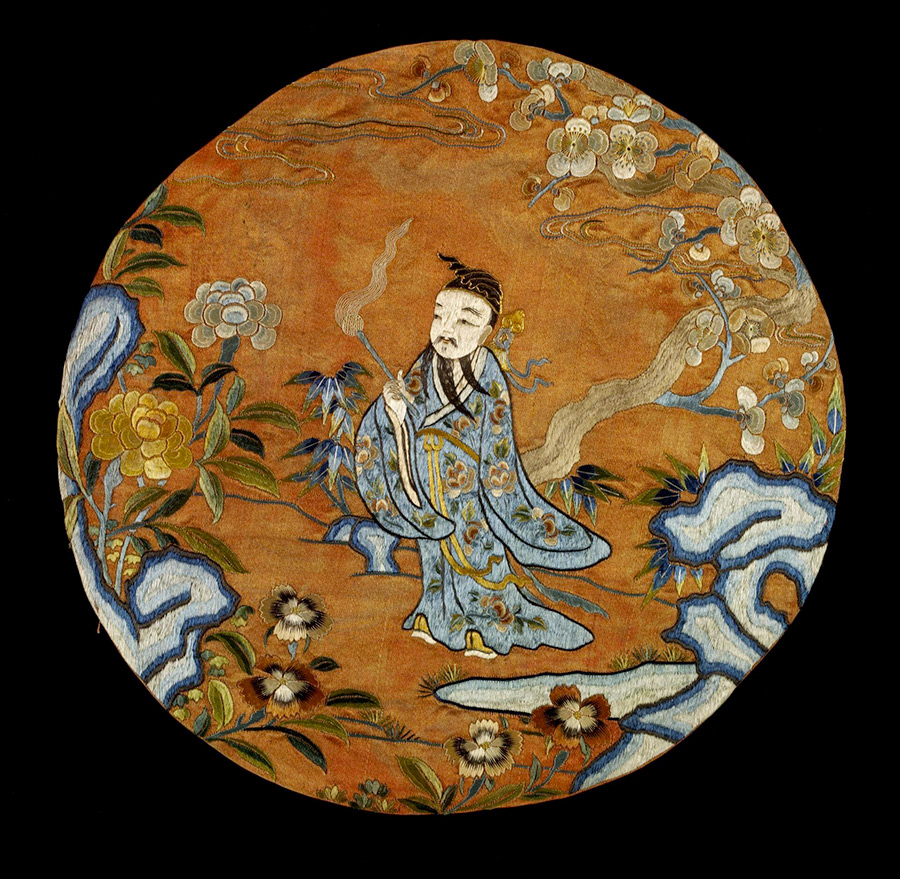 Lu Dongbin was an alchemist. He is identified with a sword, which he carries here on his back. The sword is used to subdue demons and evil forces.

Finally, here we have Cao Guojiu. His name literally means “royal cousin Cao”. He was thought to be the brother of an Empress Cao of the Song Dynasty (although on this embroidery his clothing bears the pattern of waves and rocks along the hem, a feature of court robes of the Qing Dynasty ). He is associated with a pair of castanets, and he sometimes carries a commemorative plaque in his hands. The pair of castanets has a calming and purifying effect on the environment. Cao Guojiu symbolises success in the field of studies. 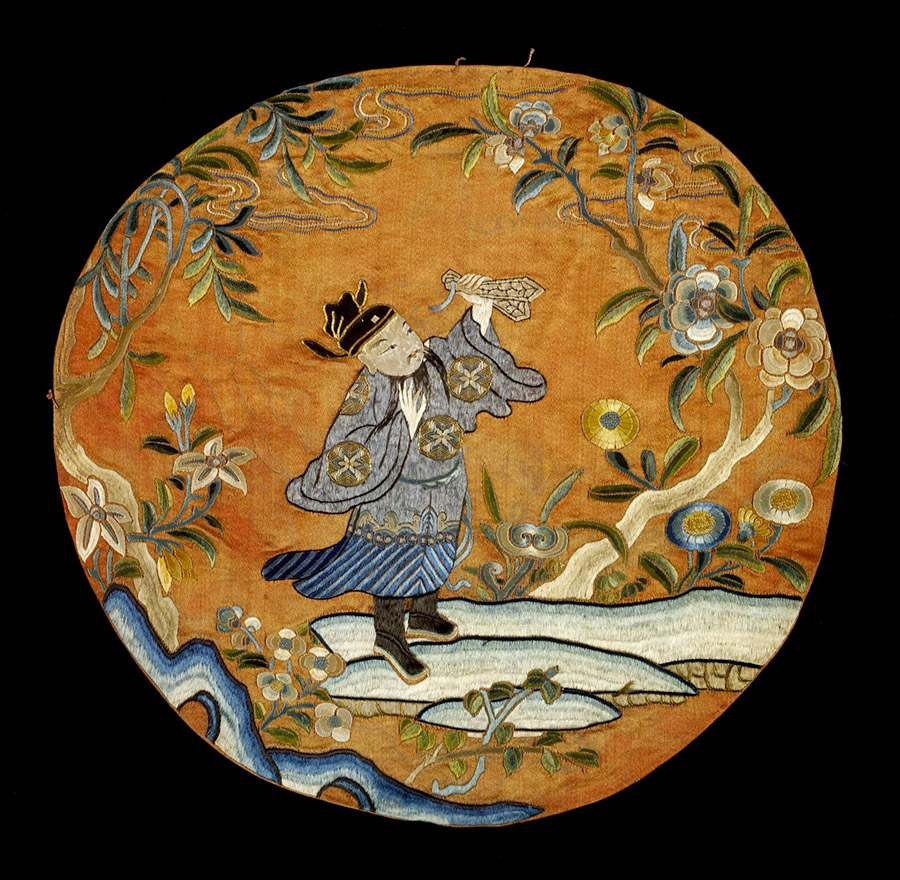