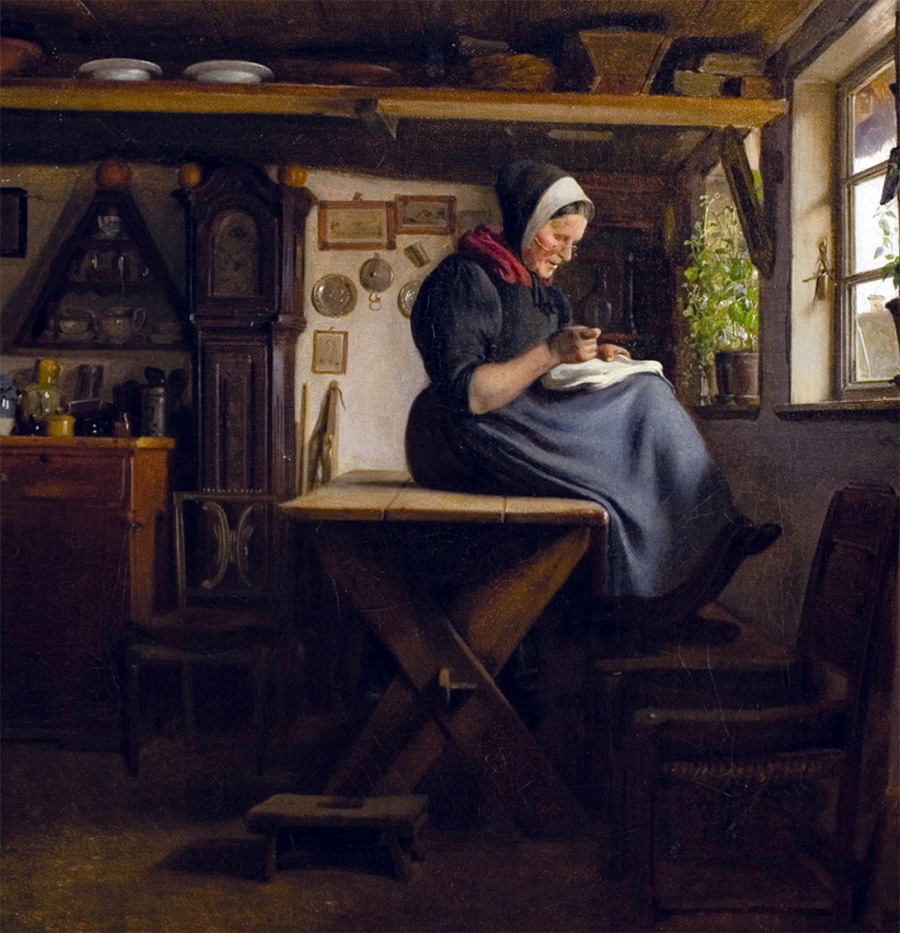 The main source for this article is the Greve Museum website in Denmark. Special thanks to Ms. Kamilla Hjortkjær for allowing me to use their photographic archives!

History and society
In the South West of Copenhagen lies a very fertile region called Heden. A region privileged by nature and closeness with the Danish capital, it is also the birthplace of a type of white embroidery that bears its name, Hedebo. It comes in many variations, either in the technique or in the designs and has seen an interesting evolution since the beginning of the 18th century.

European white embroidery is present almost everywhere, with variations between regions and eras. Influences are inevitable and sources of new variations. Thus Hedebo embroidery is often associated with the Reticello (Small Net, or needle lace) of the Italian Renaissance.

Superb example of Baldyring made around 1850. The quality of the design and its execution suggests that the embroiderer was already an expert in the field. It was on the basis of these kind of pieces that Danish architects like Martin Nyrop made Hedebo embroidery models © Greve Museum, Denmark 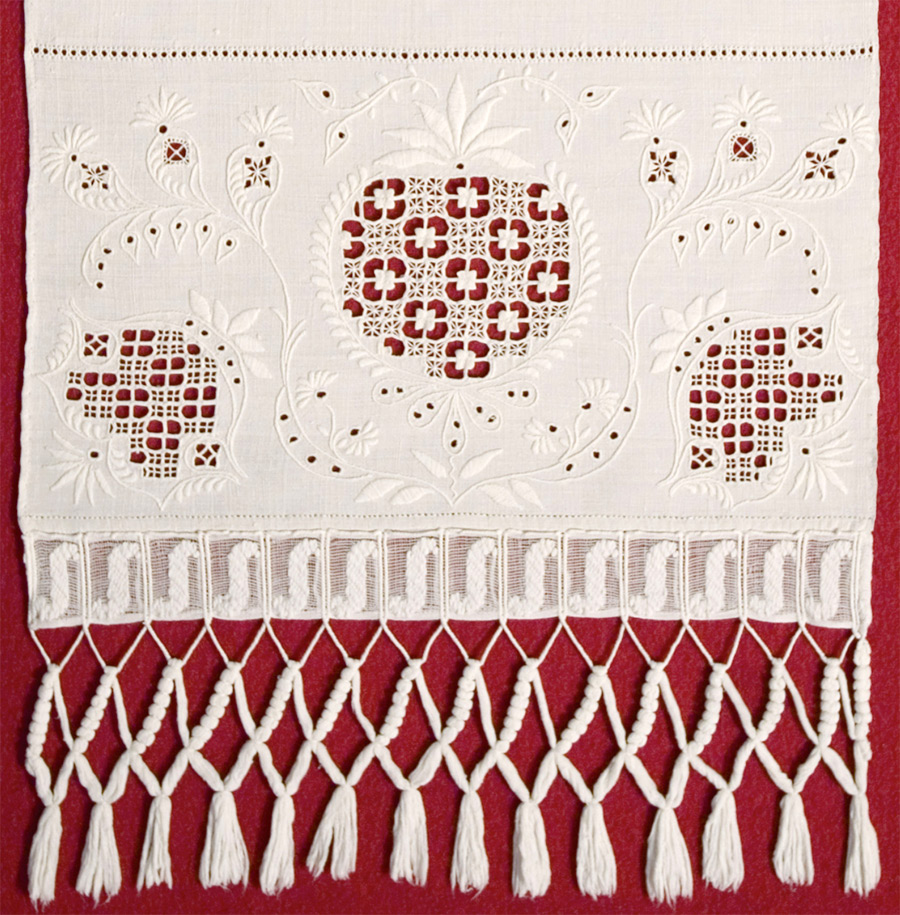 Interior of a farm in the Hedebo region, circa 1898. You can see here how the various pieces of furniture were decorated with embroidered linens © Greve Museum, Denmark

The history of Hedebo embroidery begins around the 1700s. Women in this region decorated house linen and festive clothing with embroidery. From 1850, the middle class, especially urban, will draw new creative sources from this tradition to embroider household linen. Then, at the beginning of the 20th century, a strong nationalist current will make it possible to preserve this technique, both in museums and in artistic life.

At the beginning of the 18th century, this technique was called Hedebosyning, or Hedebo sewing. This emergence came in parallel with the peasant reform during which the peasants took a new measure of their importance. The women embroidered on white linen. White was a good way to illuminate farm interiors, especially during the winter. These embroideries were exhibited in several places of the house to mark the change of the seasons and decorate important objects: beds, wall cupboard located next to the chair of the master of the house, door jambs. Men’s shirts, women’s and children’s clothing were also embroidered, particularly at the collars, shoulders, along the front opening and at the cuffs.

The more embroidery a family owned, the more it meant that it was wealthy and that the women of the household could spend time embroidering instead of working on the farm.

The pieces of this period are often complex to study because they bear the traces of several techniques and capacities of execution. They are both functional and of great value. Many women would take their mothers’ embroidery, repair it and use it to decorate another fabric. They added a new technique or used new stitches to make the junction between the 2 pieces.

Note the cushion in the foreground – the center is an older piece, in cut threads and hvidsøm. It was then cut from its original backing. A crocheted border was added in the 1920s to make a cushion © Greve Museum, Denmark 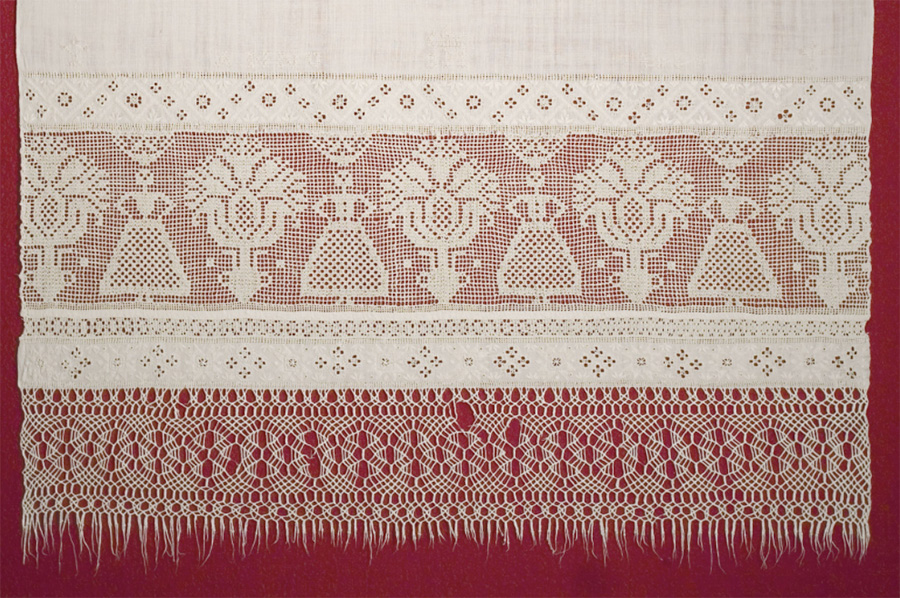 The middle of the 19th century saw the development of the the national Romantic movement. The middle class started to take an interest in national arts and crafts, including Hedebo embroidery. The peasant women would find there a source of income by selling their work in town. A late 19th century fire insurance policy states that all embroidered linen on a farm was equivalent to the cost of 16 head of cattle. The sale of an embroidered bedspread using the Udklipshedebo technique earned its stitcher in 1896 more than 300 crowns, or half the annual salary of an unskilled laborer.

At the same time, wealthy families would often hire nannies from this area. These young women had a privileged status within the domestic service and many would bring with them their knowledge of embroidery. Better-off women gradually adopted these techniques to decorate their homes, while defending a very fashionable national feeling. In 1812, during an exhibition, an embroidered headdress typical of this region was called the “nurse’s headdress”.

On the other hand, as they were living with wealthy women who could travel or buy goods from abroad, these embroiderers could draw inspiration from new patterns and techniques and thus enrich their heritage. 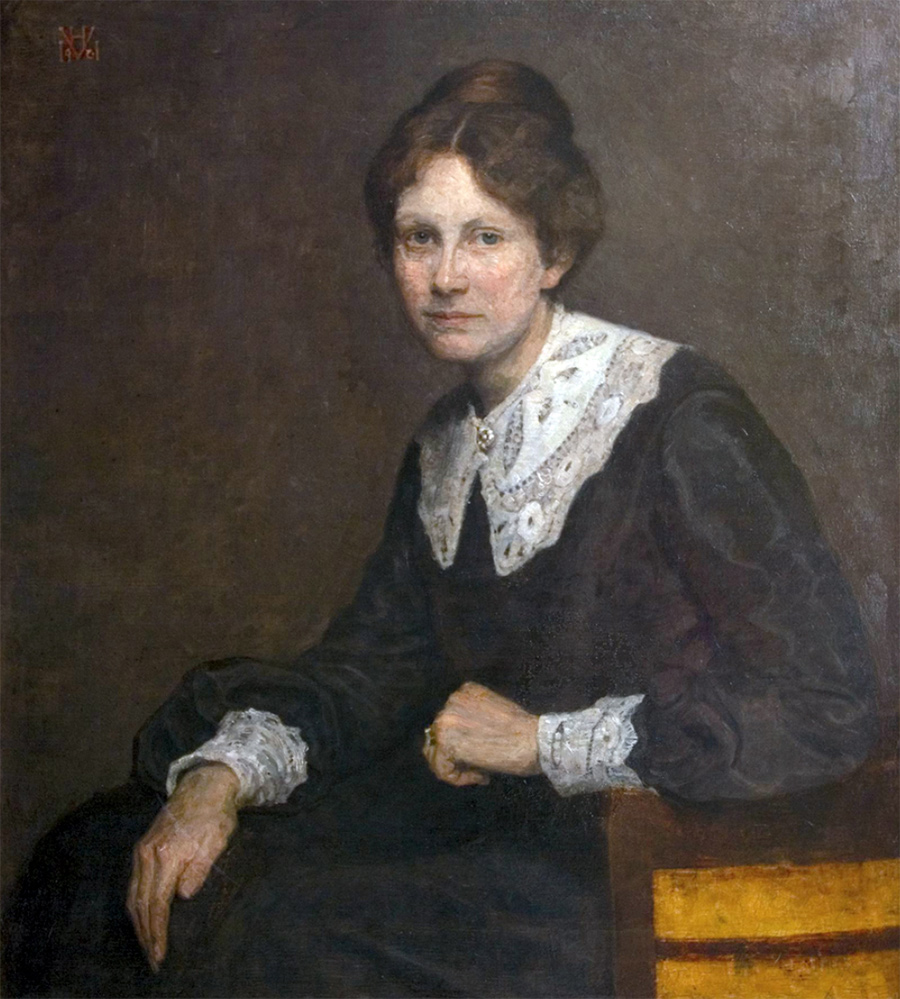 In 1879, a major national exhibition on art and industry was set up, which later became the Danish Folk Museum. Hedebo embroidery was declared a “national treasure” and a very fine collection began to be assembled. We also saw the birth of the Society for the Promotion of Hedebo Embroidery (early 20th century), which attempted to promote older techniques such as Hvidsøm. This is certainly what allowed this embroidery the live through the turn of the century and continue to be highly regarded for decades afterward.

The idea of “good taste” was also developing and certain techniques were rejected because they were considered “disconnected”, such as Udklipshedebo which is carried out without counting the threads. However, it is precisely this technique that will be the favourite among wealthy women around 1900 to make their tablecloths but also the collars of their dresses.

Collars © Greve Museum, Denmark
Up – 1890,  cut threads, typical Hedebo border made with 34 half-rosettes, each made of 7 Hedebo ring in blanket stitch
Middle – around 1900, cut threads. Large scalloped borders typical of the 1900s. The hollowed-out spaces were then filled with needle lace.
Down – Reverse Udklipshedebo with a border in blanket stitch 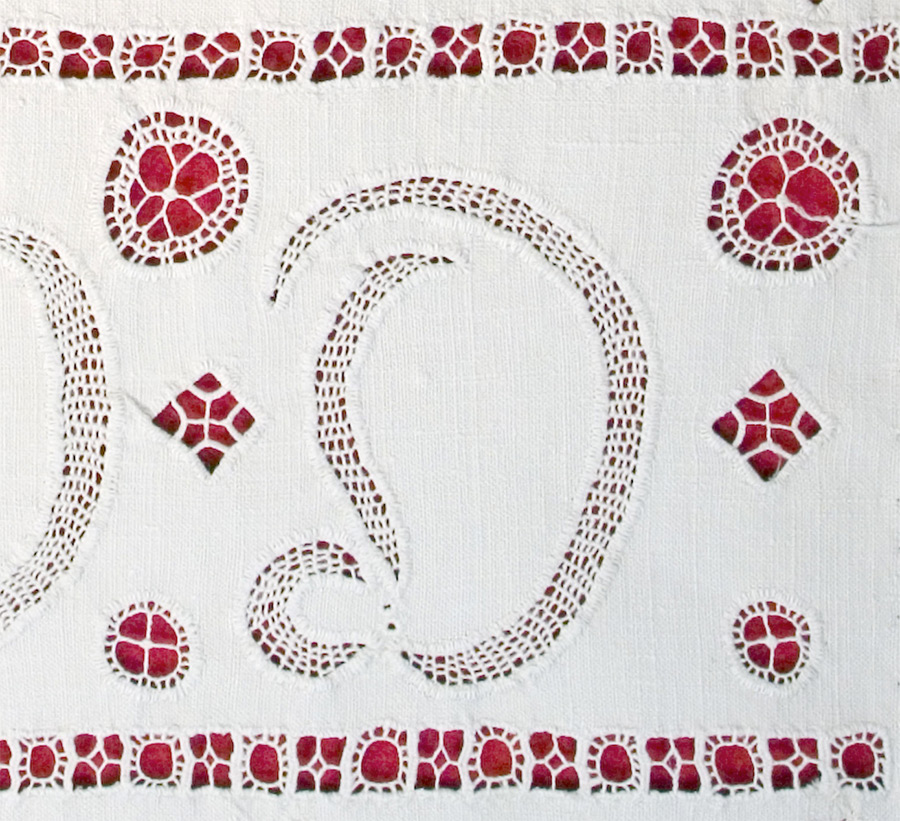 Decorative towel – Note here a very unique way of embroidering the initials: the letter is cut from the fabric and then the empty space is covered with a net of loose blanket stitches. This requires great skill to keep the shape of the letter. © Greve Museum, Denmark 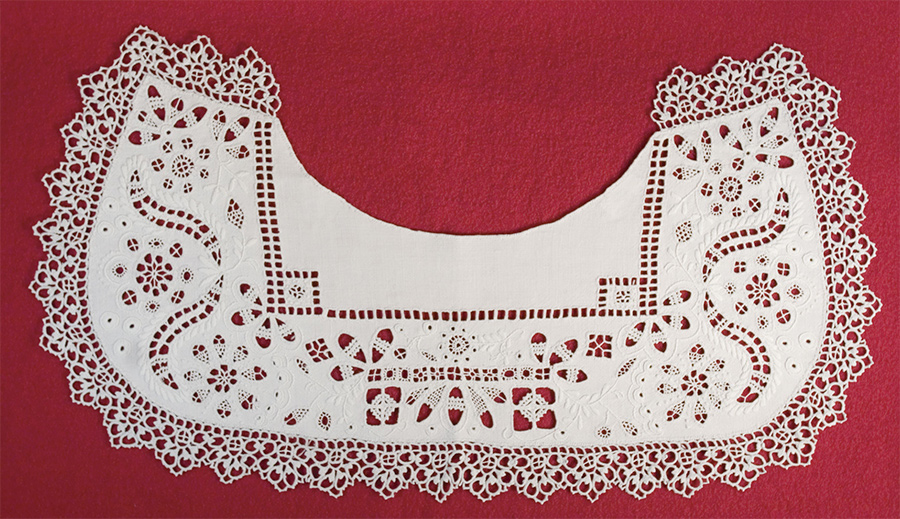 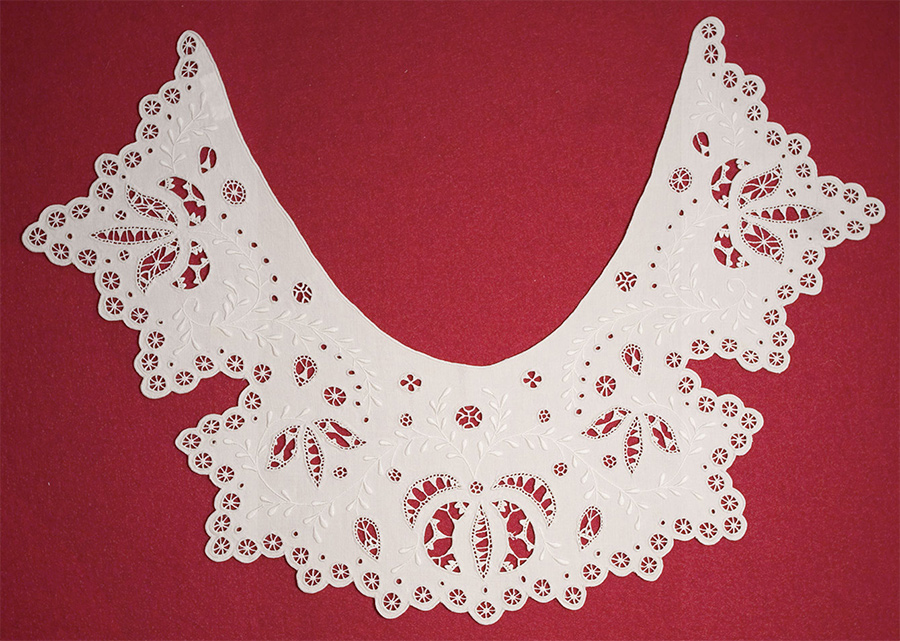 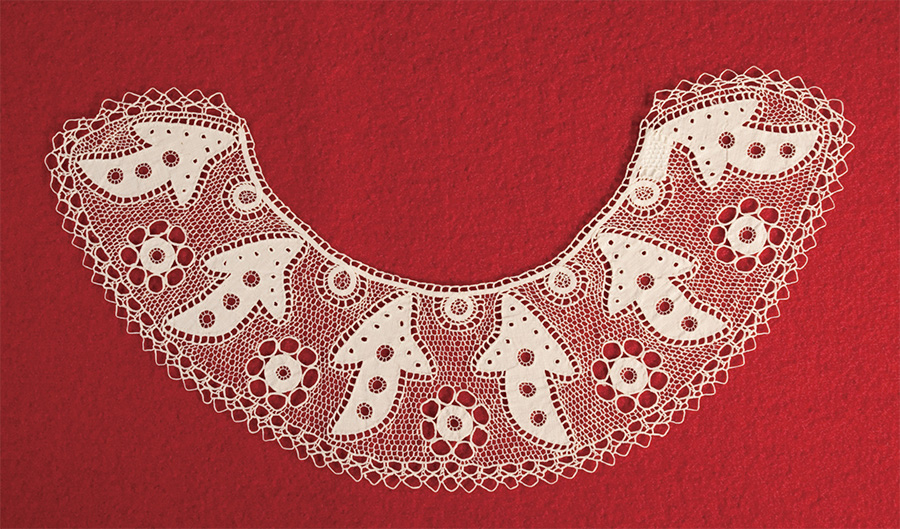 Born of the people, this embroidery became the standard bearer of the free and popular spirit as well as the creative force of the country.

The techniques
Ena Hvidberg, former director of the Greve Museum, offers a simplified chronology of the appearance of the different techniques.

Around 1700 – Syede Hedeboblonder (sewn Hedebo edges)
Embroidery to decorate the borders, performed freely. Similar to needle lace. The open or closed blanket stitch is central to this technique. It will always remain limited to the border decoration, moving from narrow borders to wider borders, made up of many rows, with patterns becoming more complex: additions of floral and geometric designs.

1700 – Tællesyning (counted threads)
Technique with counted threads which organizes geometric patterns by using in particular the satin stitch. There are stars, triangles, stylized animals, human figures and trees. It is identical to the punto reale of the Italian Renaissance. This technique was widely used for clothing as well as knaedug and the posts of wall cabinet doors. It is often associated with the Rudesyning technique. 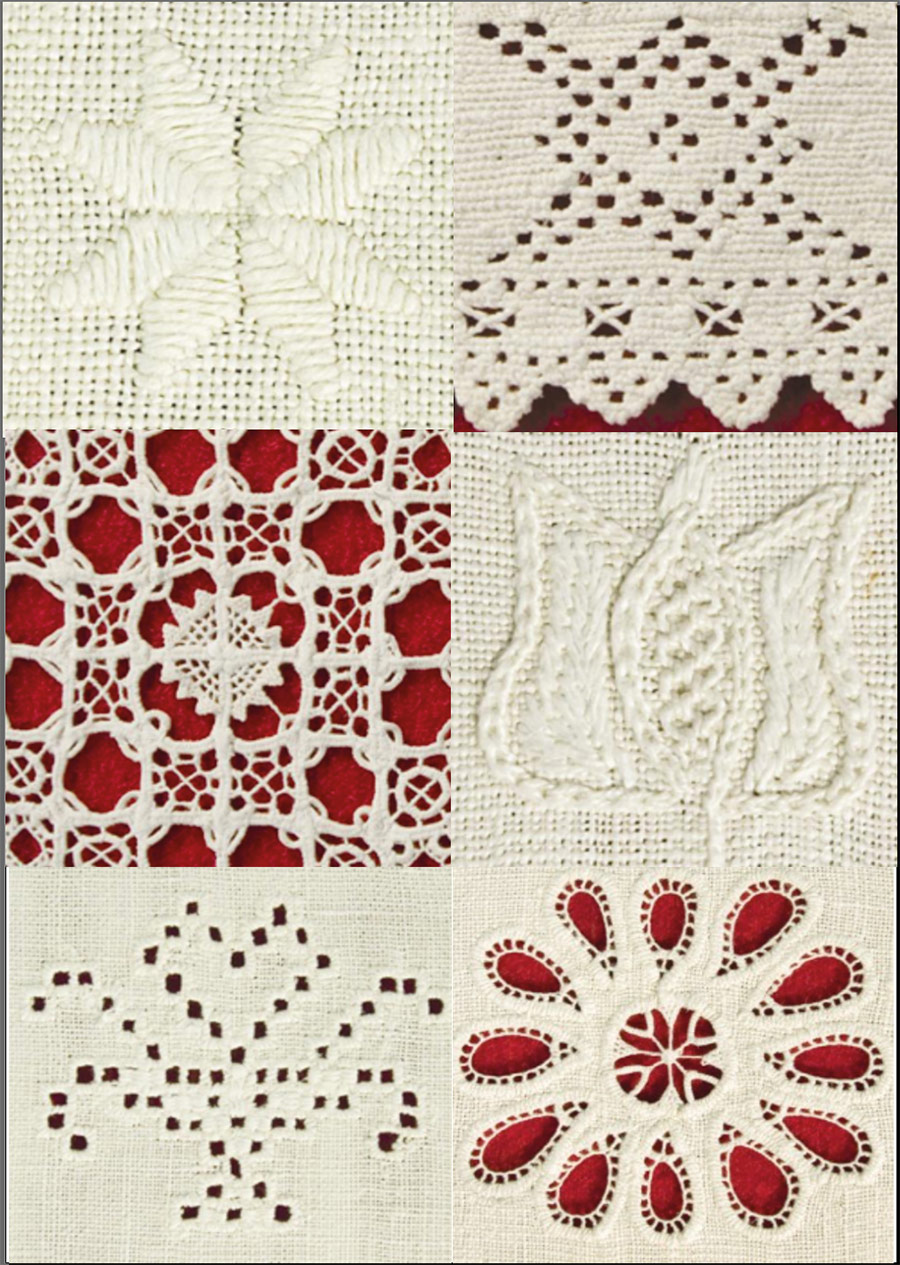 1750-1840 – Dragværktextiles (drawn thread work)
Here the threads of the fabric are removed to create spaces which will then be filled with embroidered patterns such as animals or trees. We find this technique during the Italian Renaissance.

1805-1840 – Rudesyning
Technique widely used until around 1900 to embroider monograms and decorate household linen. The threads are pulled less there than in dragvaerktextiles. Small squares are cut from the fabric. Threads are left between them, which will then be covered with blanket stitches to create small bars. Some of the squares are then stitched to create a stylized animal design, human figures, plants or a tree of life. This technique is often associated with Baldyring, Hvidsøm and Tællesyning.

1820-1840 – Hvidsøm
Often classified as needlepoint embroidery, this stitch uses both drawn and cut threads. You can recognize it by the rows of chain stitches that surround the main patterns. Technique used both for the decoration of household linen and for clothing. Very popular in peasant society in the 18th century, it was hardly used there by the mid-19th century. On the other hand, it is at this time that it was taken up by the middle and upper classes who used it for tablecloths, or decorative pieces in their living rooms. This taste will continue until the 1950s.
The design was copied onto the fabric, then threads were drawn, others were tied. The spaces created were filled with typical striped or checkered patterns. The embroiderer would then use satin stitch and blanket stitch to make small flowers or stems, hearts, vases with organic shapes and even stylized animals. The whole thing gives a rather baroque aspect.

1835-1855 – Baldyring
Drawn and counted thread technique, inspired by 15th century reticello embroidery in Italy, it reflects the Rococo style. It is sometimes regarded as the true form of Danish national embroidery heritage as it is the development of Hvidsøm. It precedes the Udklipshedebo. The motifs here are often padded before being stitched in a satin stitch, ensuring a beautiful relief. A stiletto was sometimes used to make small holes in the fabric, such as in Broderie Anglaise.
Squares can also be embroidered: 6-8 threads are drawn, 6-8 threads are left, 6-8 more threads are drawn, etc. Then the edges of the empty squares are embroidered with blanket stitches. The preserved squares are reinforced and embroidered in the form of bars connecting the other squares. Finally, the hollowed-out squares can be filled with blanket stitches to create a larger pattern.

1855-1870 – Udklipshedebo (needle lace)
It is a free technique, which uses both cut threads and needle lace techniques that developed in Denmark from 1850. It includes the traditional blanket stitches, open or closed. The patterns are embroidered with curves, wheels and the lace spaces are often surrounded by foliage with padded satin stitches. This technique was used for traditional costumes, the collars of women’s and children’s shirts and small tablecloths. From 1900, it was present in all homes of the middle class.

A so-called “reverse” technique also appeared in 1850. Small pieces of fabric were cut according to a floral or geometric pattern. The edges are embroidered with blanket stitches and the whole thing was connected by needle lace stitches. These small pieces can also be freely embroidered with satin stitches, padded or not. Large decorative holes are also often present. 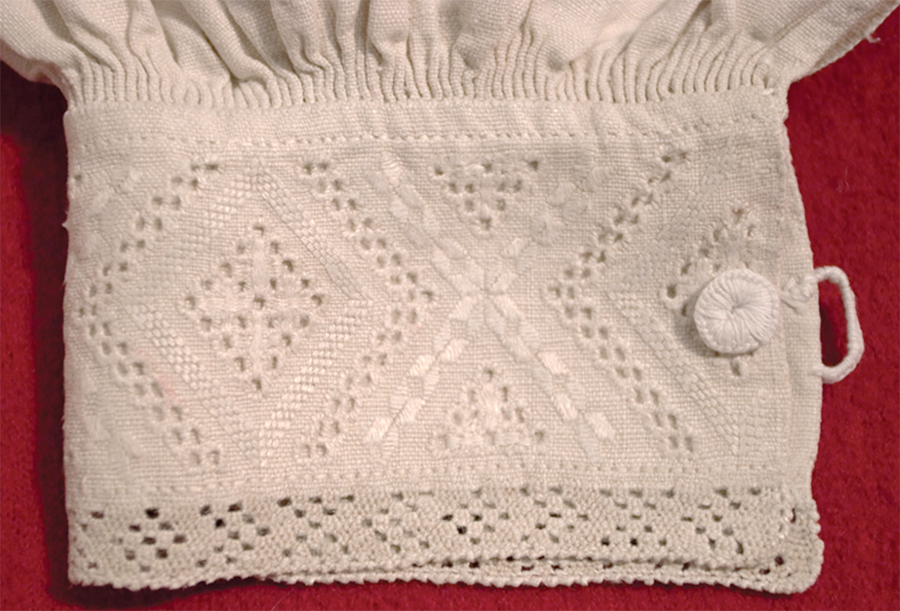 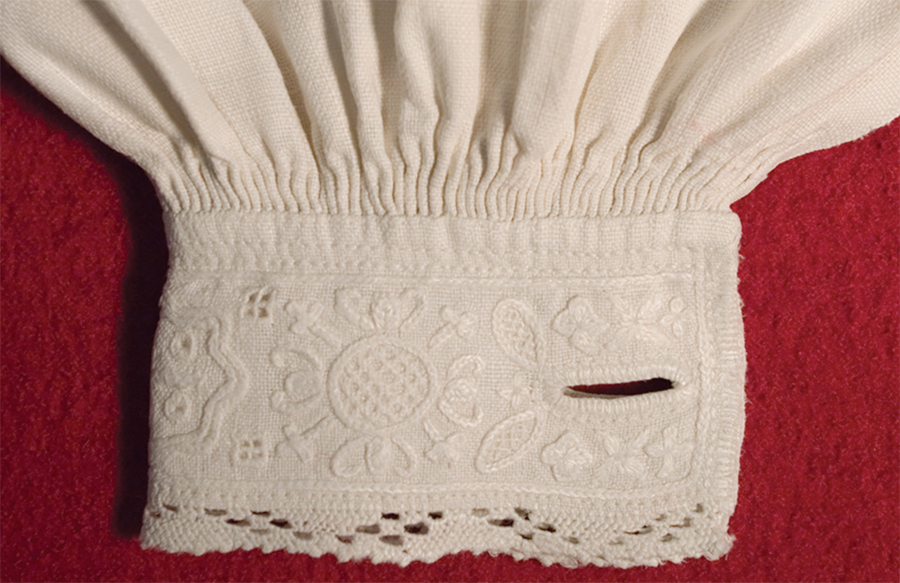 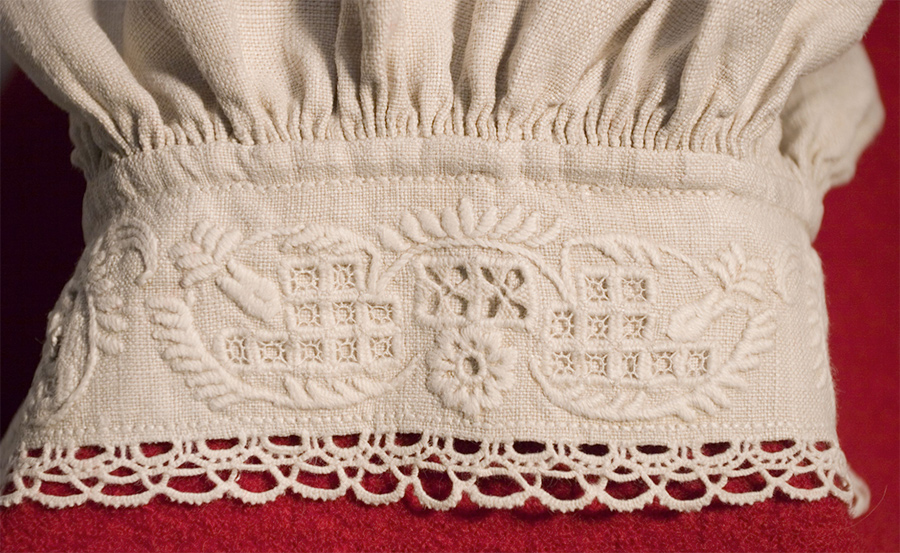