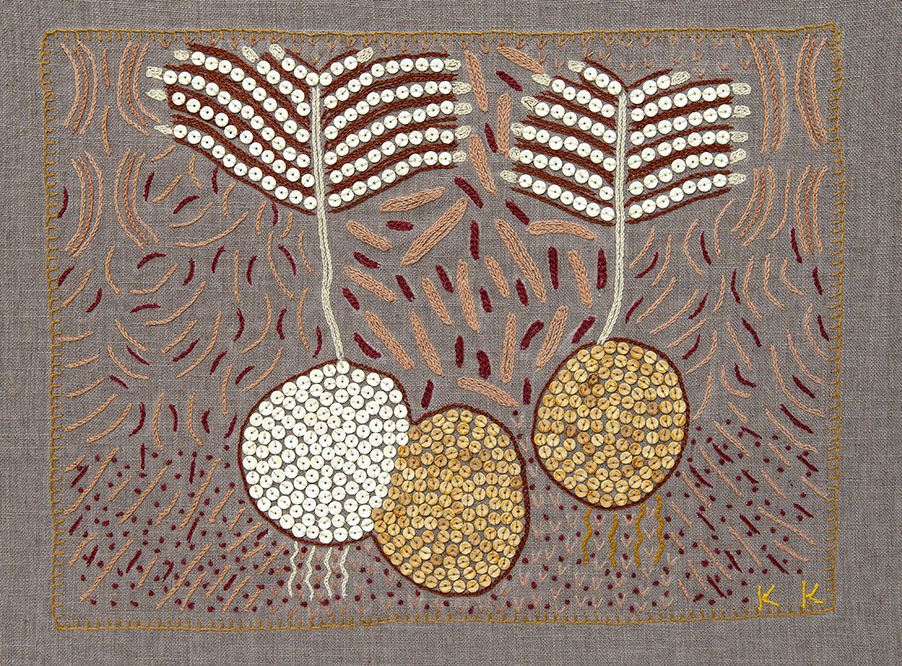 Omba Arts’ roots go back to the early 1990s when founding director, Karin le Roux started researching the development of the craft sector for a large NGO. Karin travelled to rural communities around Namibia providing training whilst developing relationships and networks that remain strong still today. These early years laid the foundation for an independent organisation that was to become Omba Arts Trust in 2004.

Omba is the local word for the flat end of the Conus Betalunis shell that is found off the east African coast and traded as far as Namibia – it is worn by both Ovahimba and Owambo people in Namibia. 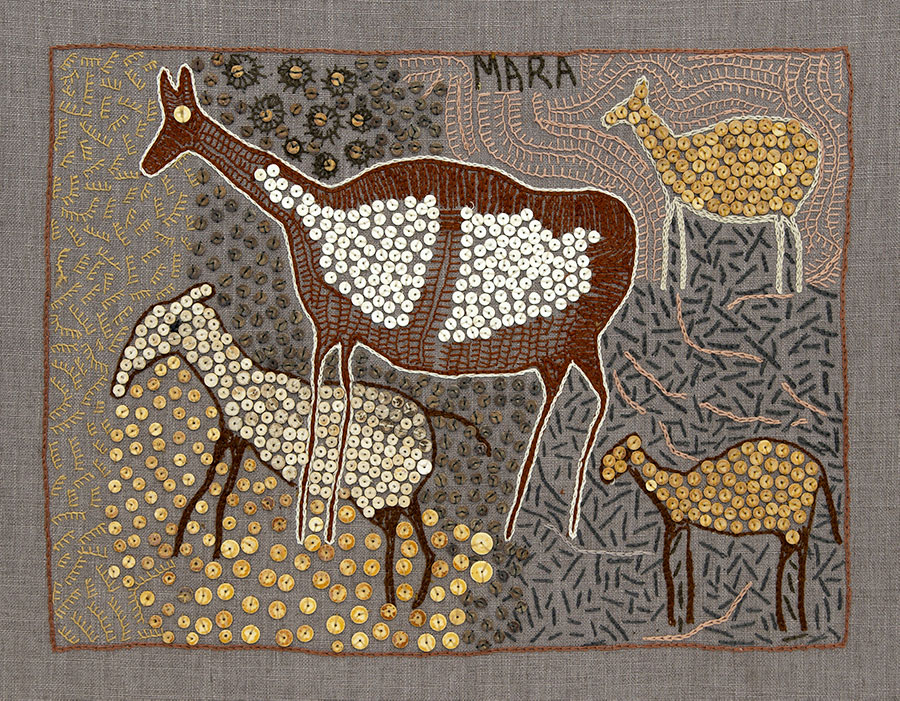 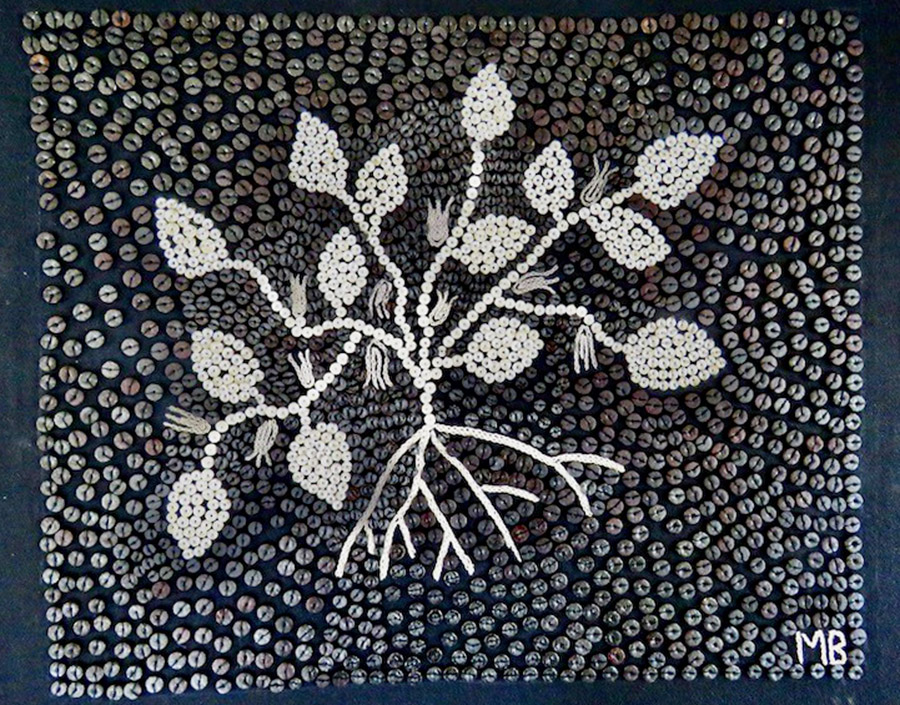 Today, the San in Namibia remain the worst off of any population group in southern Africa on pretty much every measure from educational attainment to income level. In part this is because many of the social and cultural practices refined over tens of thousands of years that made them for so long the most successful civilisation ever to have lived, were not well suited to life in modern capitalist economies. Their customary ‘fierce egalitarianism’ for example has impeded efforts by aspirant San leader from achieving as much as they would like. Their historical indifference to accumulating wealth, generating surpluses, or using property as a means to exert power over others has similarly left them disadvantaged in their dealings with others. But by far the greatest impediment has been the fact that today they remain largely landless.

With ever increasing numbers of San now forced to live in urban fringes and squatter settlements like Kanaan on the edge of Gobabis’s Epako Township, life is changing fast and knowledge of hunting and gathering is being lost.

With more exposure to social media and school books, the unique visual language of an ancient hunter-gatherer culture is changing and it is clear that now is the moment to record the art works from the Namibian San communities – !Xung and Hai||om from the Ekoka settlement in the northern Ohangwena region and Ju|’hoansi from the resettlement farms of Drimiopsis and Donkerbos in the Omaheke region. 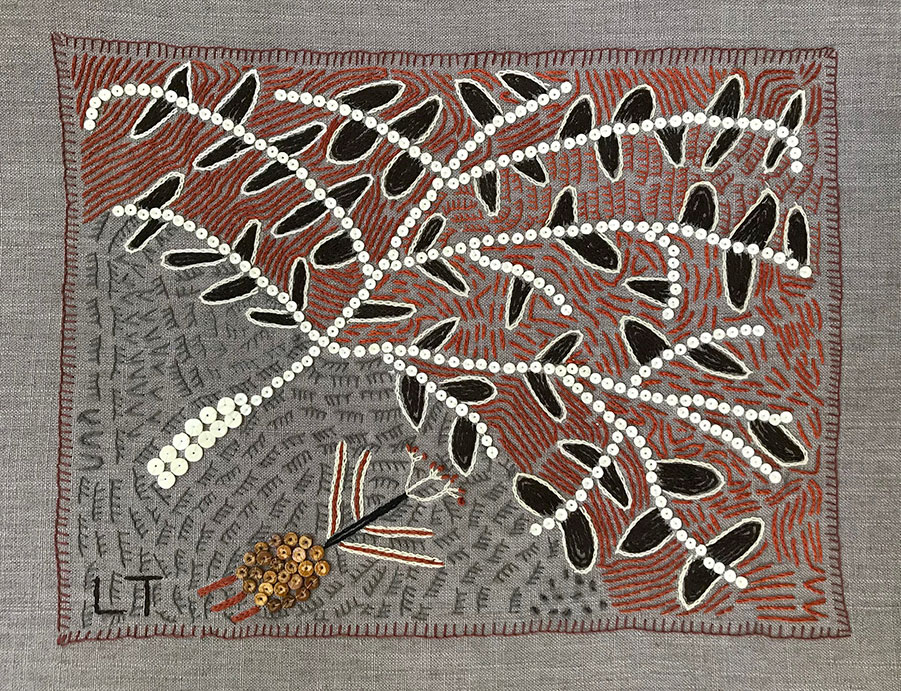 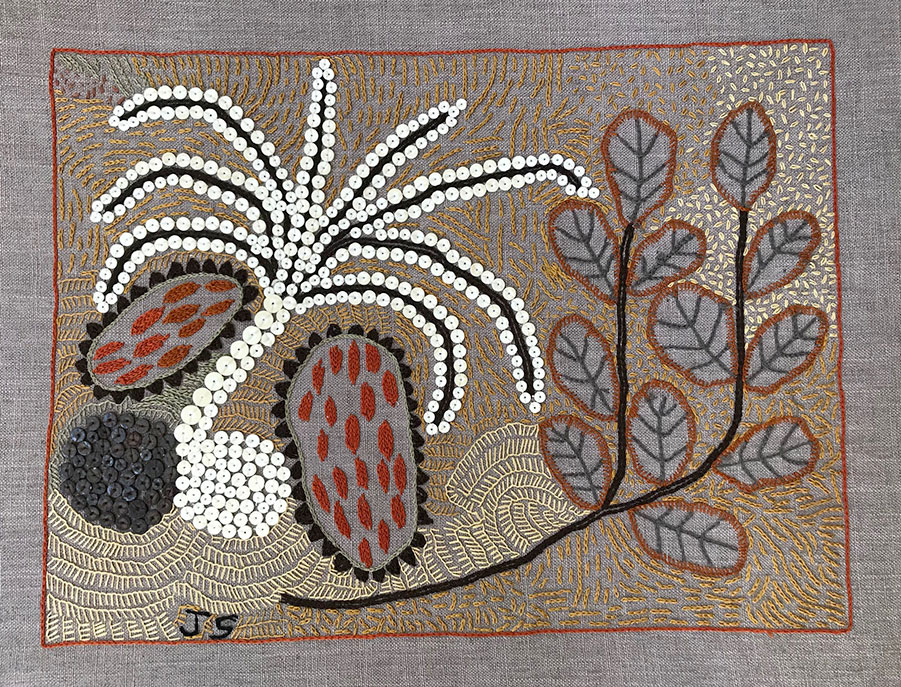 For the past 20 years, Omba Arts Trust has worked with local San artisans in remote areas of northern Namibia and the Kalahari Desert. As founder, Karin le Roux saw a way to revive San material culture through workshops that offer opportunities for skill-sharing and creative expression, as well as a source of livelihood and pride. Karin’s work included organising and facilitating mobile art workshops in remote locations: finding potential artists, getting artists to workshop venues, transporting and preserving art materials and the art works, getting payments back to the artists who live vast distances from the nearest bank or post office: getting the Lino prints proofed and printed professionally at the Michaelis School of Art in Cape Town, South Africa, and transported back to Windhoek, back to the artists for signing and back to Windhoek.

As partners in the LISUP (Livelihoods Support) Project that commenced in 2008, the Omba Arts Turst was tasked to find opportunities for craft development with the three Ju|’hoan resettlement farms of Skoonheid, Drimiopsis and Donkerbos/ Sonneblom. Drawing on San cultural resources to develop products, they created jewellery ranges with Skoonheid and Donkerbos, reviving the 72 000-year-old ostrich eggshell bead-making skills.

What could be done with women in Drimiopsis, the closest settlement farm to Gobabis, the commercial hub of the Omaheke region? Glass beads have been traded among the San and others for centuries. Today the women still adorn themselves with strings of glass beads and give them to family members, often to cement relationships. 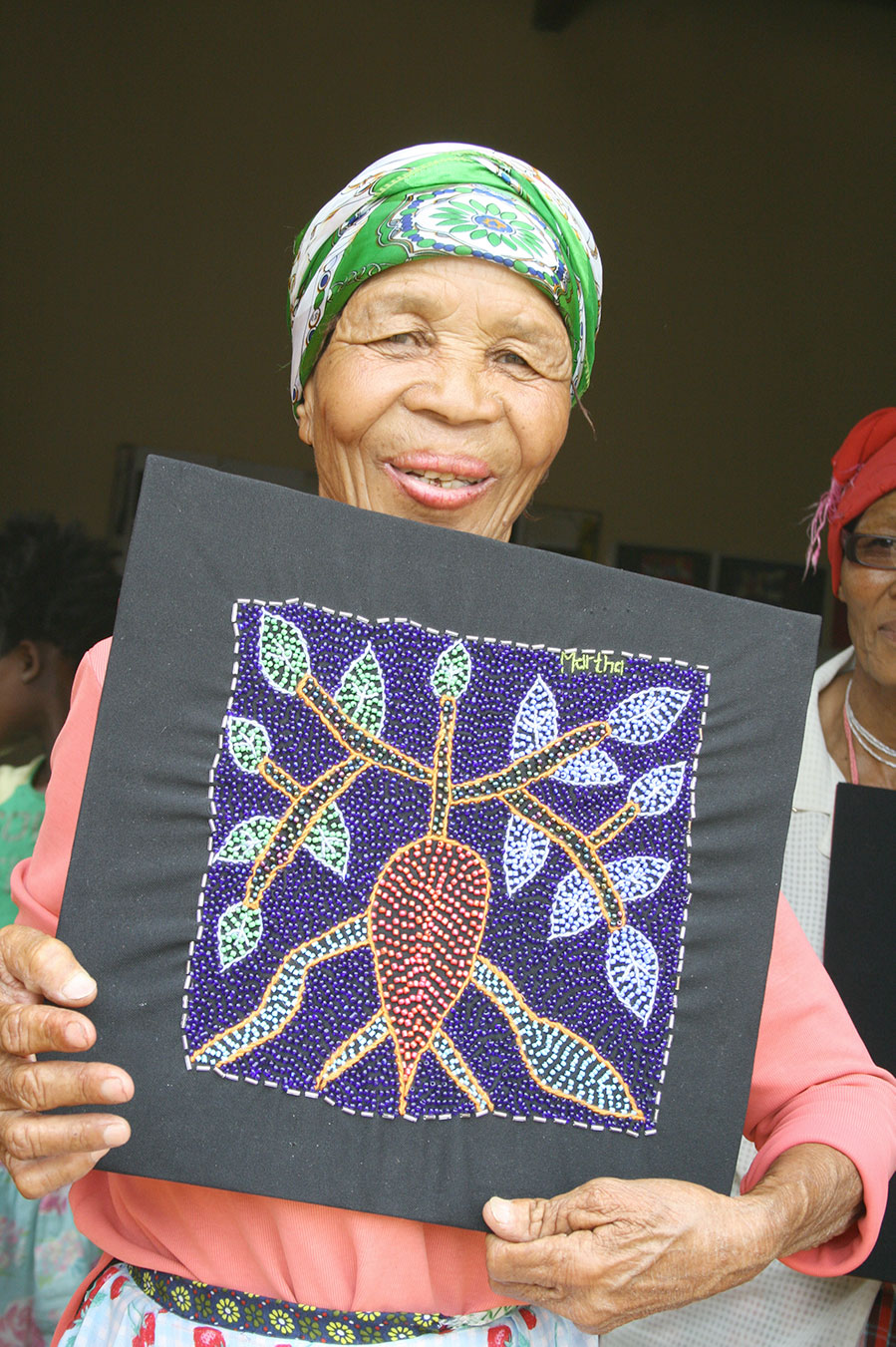 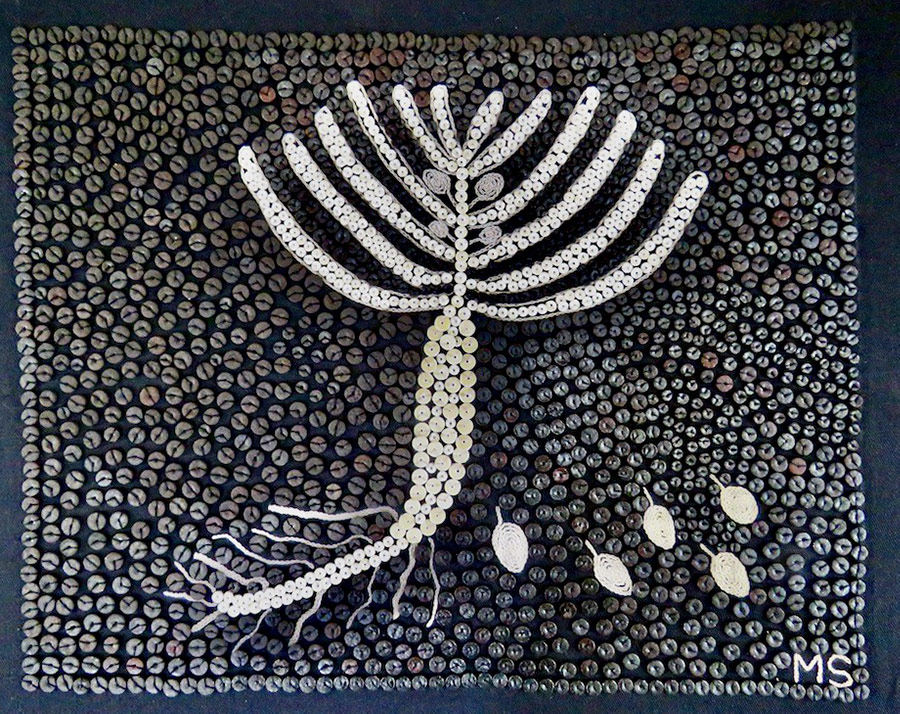 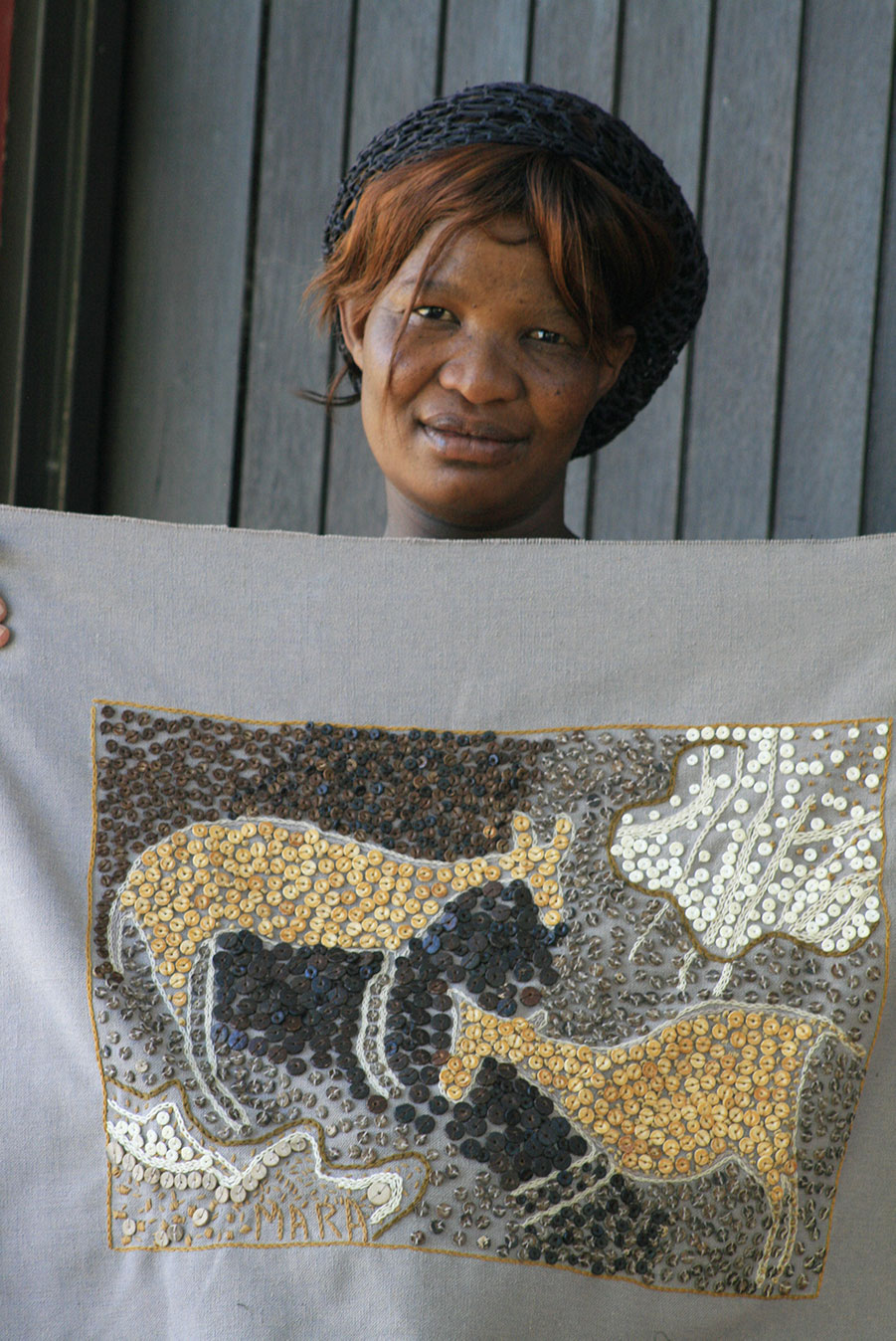 It seemed like a natural progression to use glass beads in a new creative way. Over the next 10 years a group of women from Drimiopsis produced little art works depicting the plants they gather and scenes from their community using glass beads and embroidery on black cloth. Nicolaas Maritz describes these works: ‘Embroidery is such a slow process, yet it comes as no surprise to notice the ‘easiness’ and unforced imagery on the cloths, as if they were drawn instead of embroidered with beads.’ 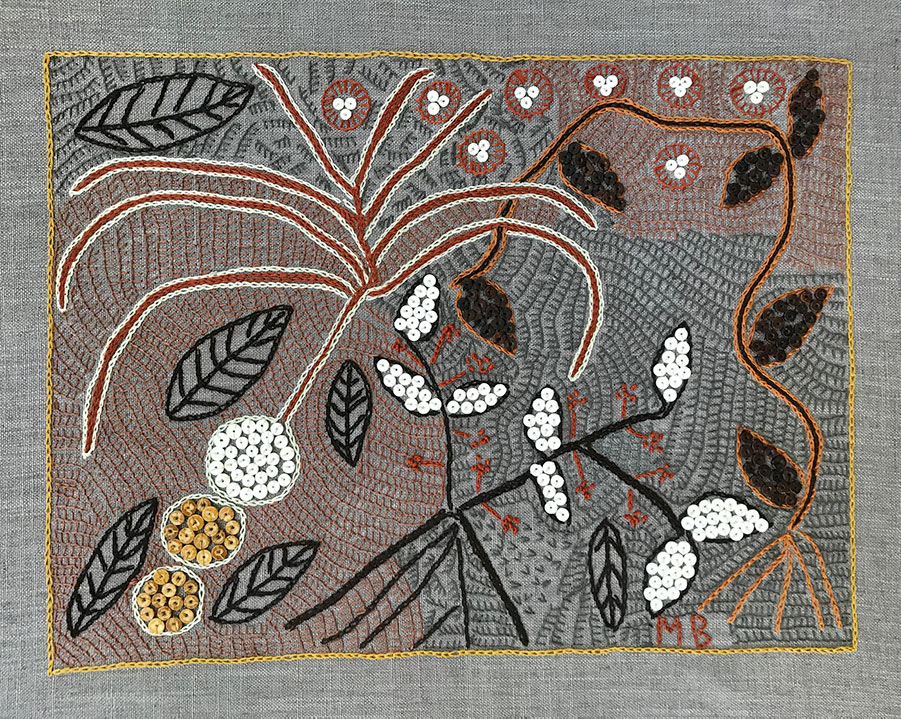 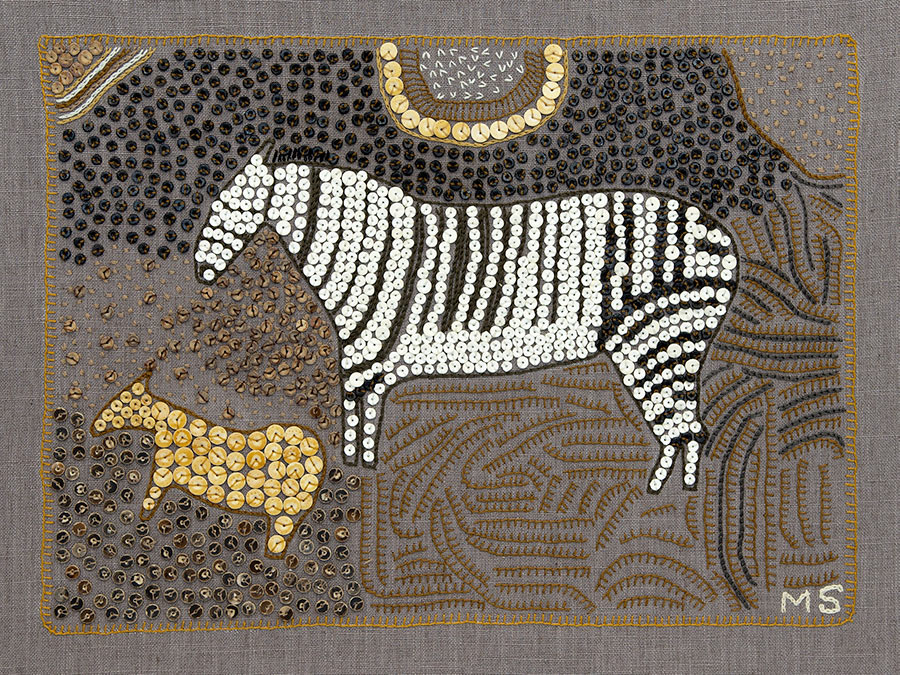 The Brandberg massif in western Namibia contains some 50 000 rock paintings dated between 2 000 and 4 000 years ago, made by ancestors of the San who gravitated to the mountain during the dry seasons as permanent water is to be found there. Karin shared with the artists a selection of the meticulously hand drawn images of the rock art from the Harald Pager series of books, The Rock Paintings of the Upper Brandberg. Their interpretation of Pager’s graphic images in both glass beads and more recently, ostrich eggshell beads together with embroidery, inspired new techniques and new images.

Creating art is a way of connecting, a way of building chains of trust and getting people to take ownership of their lives.

Mara Britz, who has lived on the Drimiopsis resettlement farm all her life, joined Omba in 2008 when she had bead training. She recalls the high unemployment in her community, where many of the young people lived off a share of their grandparents’ small pensions. “I did not finish school as the majority of San people, and this work that we do has given us life. We work, we get money, we eat, our children eat…we thought we were abandoned, but Omba has helped us stand on our feet.”

These works are rooted in memories of the things these artists know intimately: the veld food they gather (for food and medicine), including tubers and edible leaves, community life, San cultural material like gathering bags, the wild animals native to Namibia, such as elephants, rhinos, giraffes, zebras and guinea fowl. “Our role is not specifically to teach art but to provide a space for experimentation with art materials,” Karin explains, “to stimulate discussion around knowledge and culture, encourage story-telling and mark-making.”

Despite the painstaking slowness of embroidery, the resulting images have the ease and fluidity of drawing. The distortions of scale, perspective and colour only add to their expressivity. There is a simplicity and directness to the forms, which are embroidered in a colourful array of beads to create an abstract all-over pattern. The unstudied abstraction of the embroideries recalls the qualities to which European modernists aspired, although this is not a point of reference the San artisans would understand. 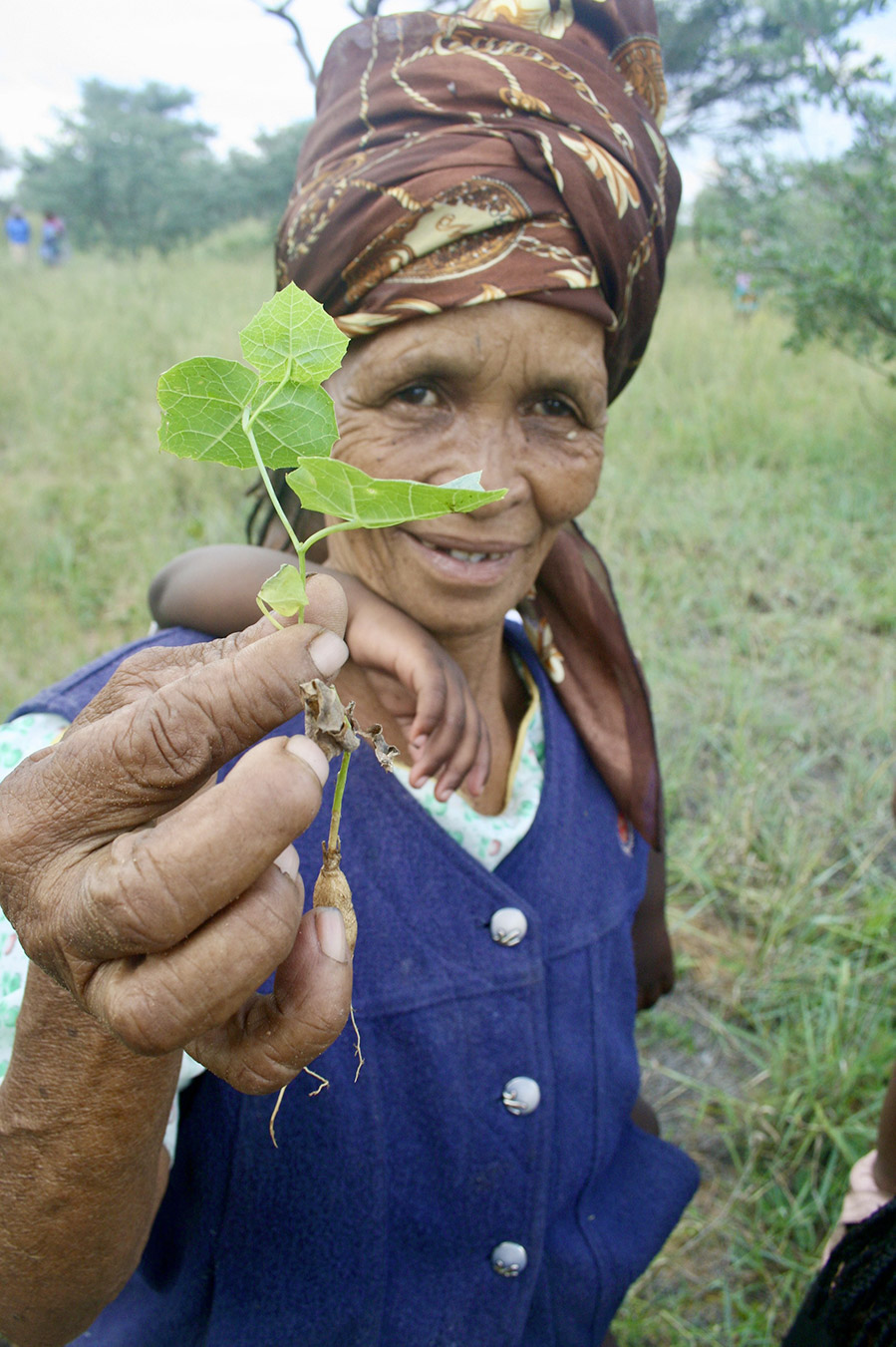 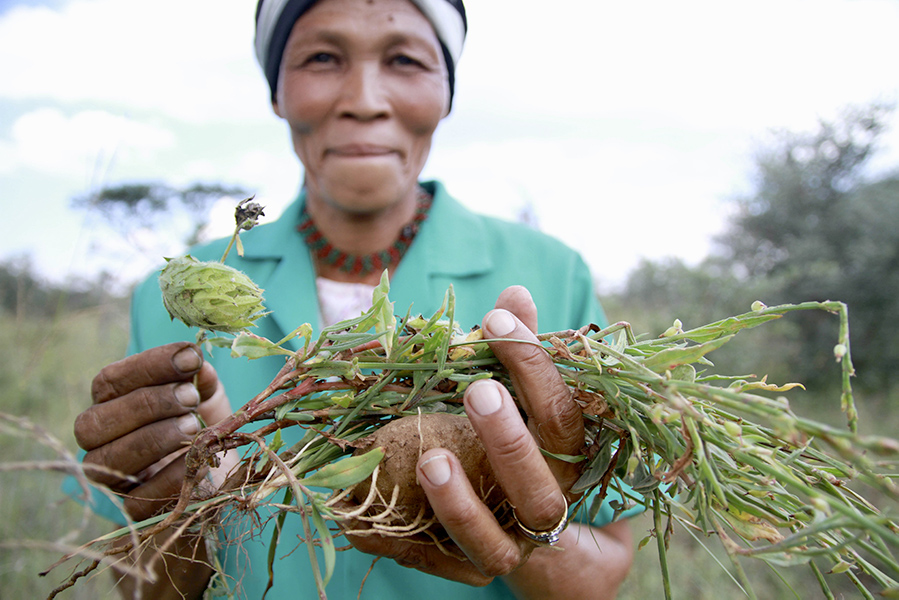 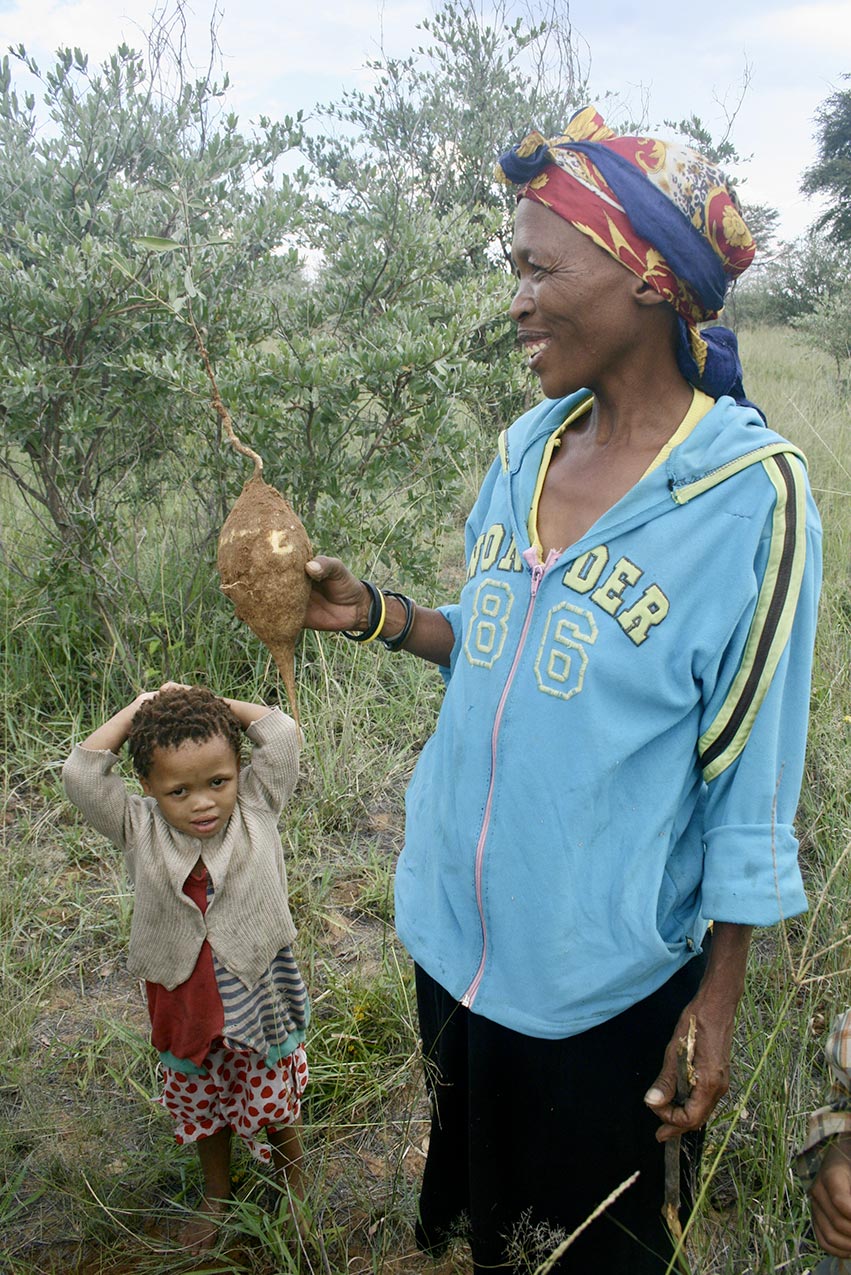 Historically, ostrich eggshell beads were used to create decorative headbands with circular or triangular patterns. “Ostrich eggshell beads were made by our ancestors 72,000 years ago,” explains Monika Kaimanseb. “When we were young, we just thought of ostrich eggs as food. We didn’t know how to make these but were taught by our elders that the shell could also be used for beads.” These beads, which the San call !go, are made in the same way as they were centuries ago: shaped by hand and then pierced through the middle by drawing a bow across a spinning drill. 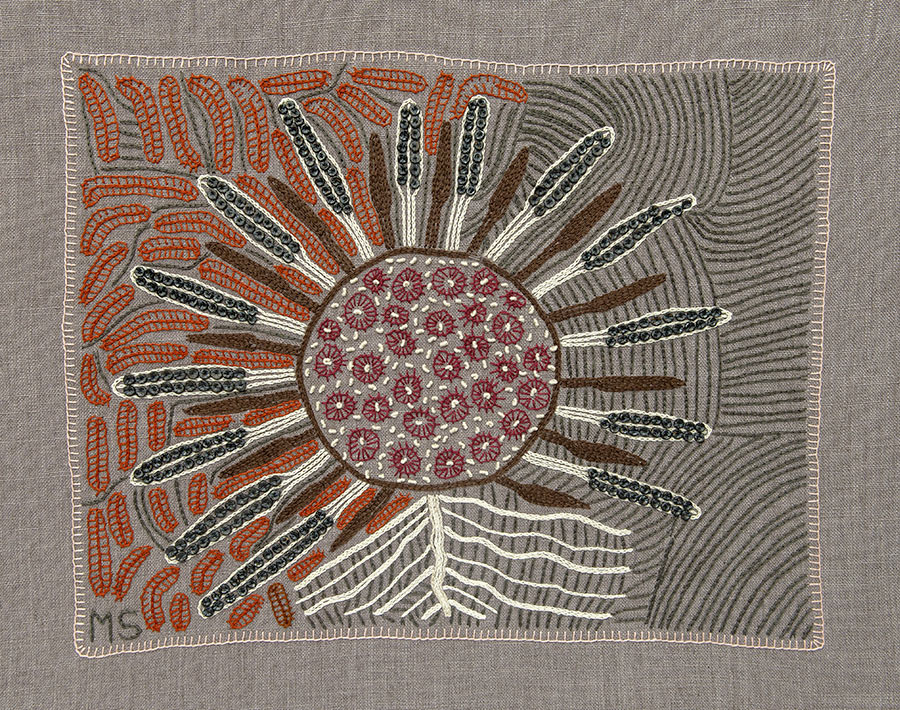 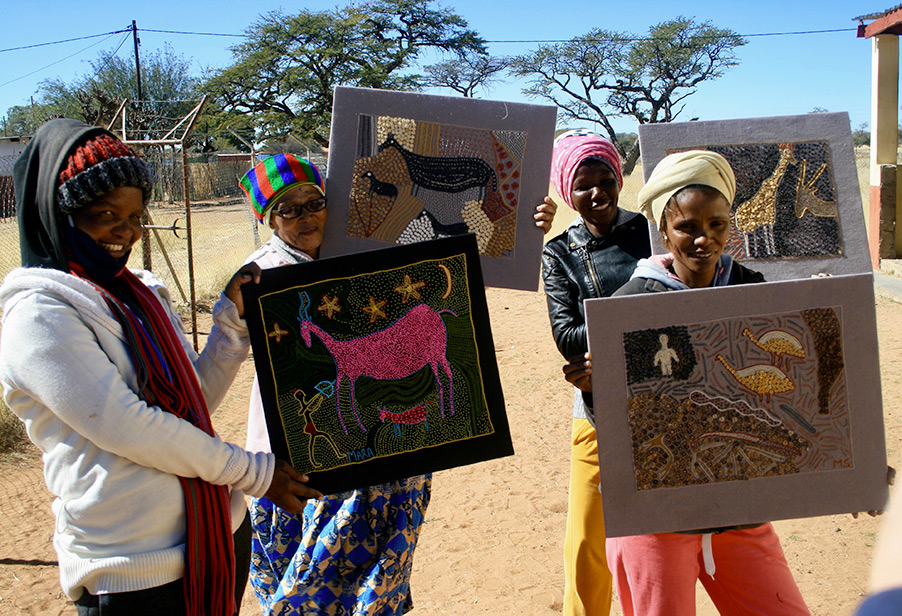 Jan Gashe, one of the male artisans in Donkerbos who carves the beads, recently developed an innovative solar-powered method of doing this. Today, the traditional patterns are incorporated into modern jewellery or embroidered cloth designs that Karin describes as “rooted in culture but with a contemporary twist.” The women of Drimiopsis find enjoyment in making crafts that are connected with their heritage. “We put the jewellery on and ask each other if it is well-made”, says Monika. “We take pride in creating something beautiful.”

The transition from a traditional nomadic lifestyle to one defined by land ownership and Western capitalism has been a rocky one, but there are many ways in which old customs are being revitalized. Josephine Stuurman, who joined Omba four years ago, describes adapting a pattern from a leather pouch that her ancestors would have used in hunter-gathering. “We take what our forefathers made and we put it on cloth so that our tradition and our culture does not die,” she says, “and we can share it with our children.” 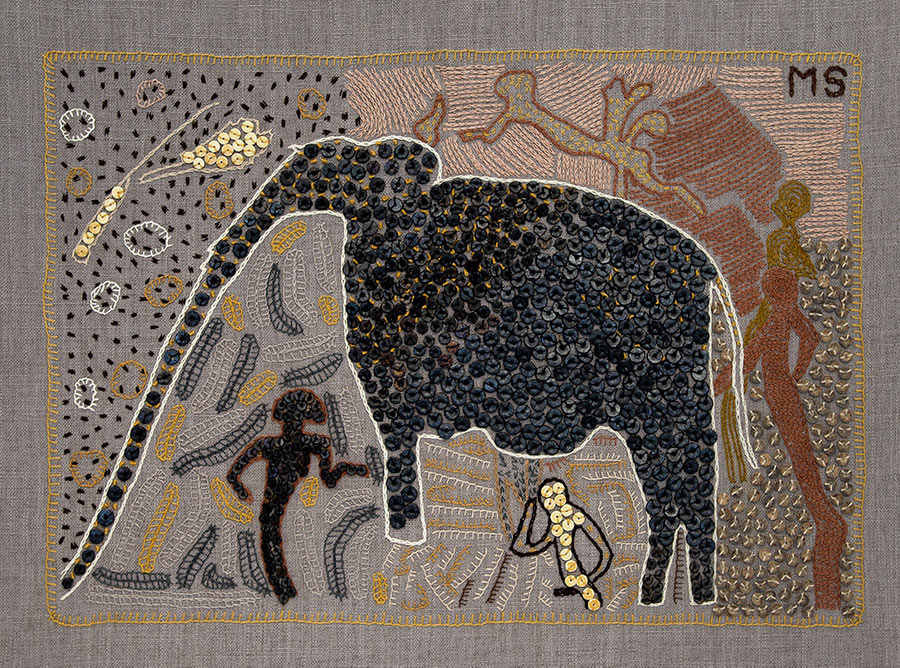 Over the past 12 years, Karin has seen Mara grow from a young schoolgirl into a mature woman and community leader. “I have seen the other women growing older, growing in confidence and I have seen them supporting their families. These women have very little formal education, but all groups have a bank account, they write out invoices, they have learned skills that equip them in their broader personal lives. That is how we envisage the work that we do – craft or art as a conduit for broader community development.”

Josephine explains that the San’s marginalization has led to a reticence around sharing their culture. “Omba has shown us not to be shy,” she says, “that we should be proud of our culture and show it as San people – the first people on this Earth.” As Mara poetically phrases it, “We are the roots of the first tree that was planted here. A tree without roots will not have life. Just as we are the roots, so Omba is the water that the tree needs to live and bear fruit. Omba sustains us so that we can grow fruit, so that we can bring food into our community.” 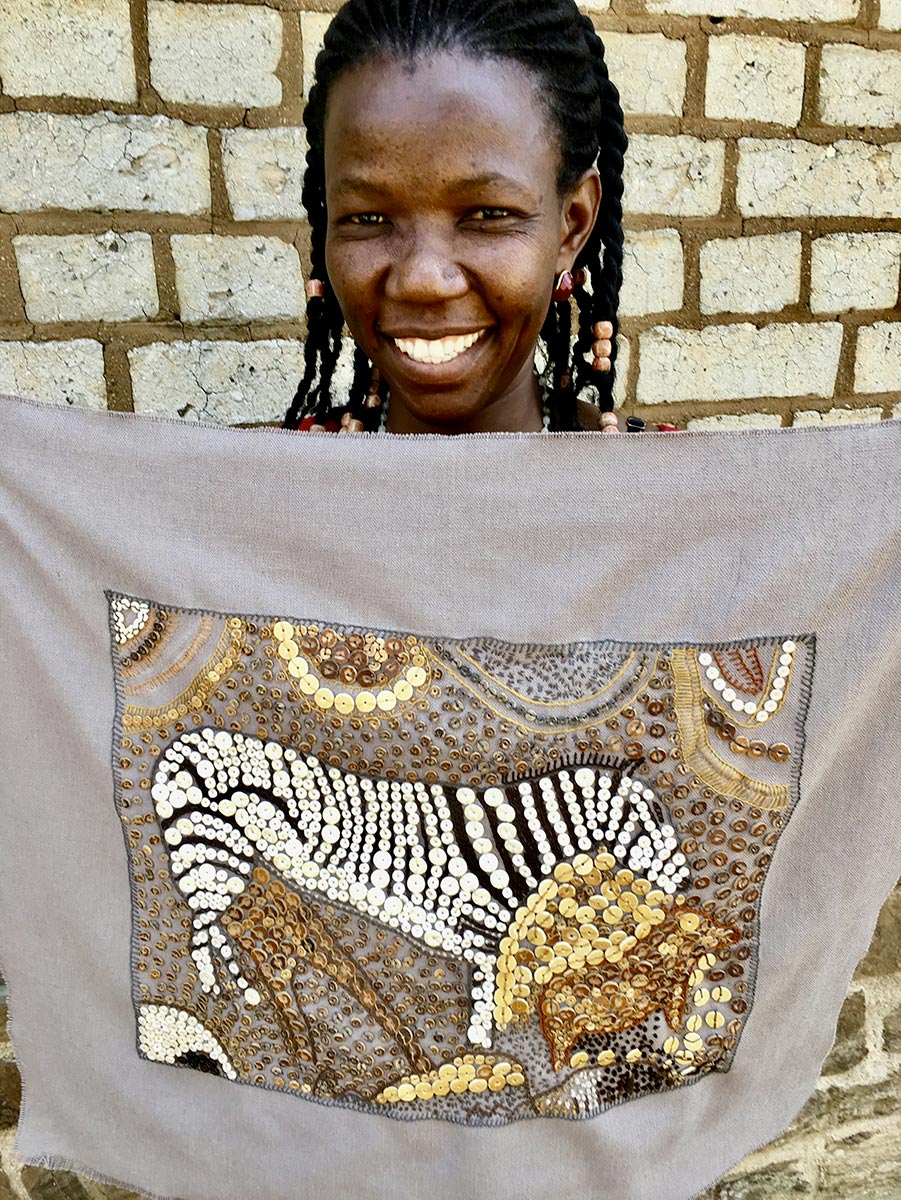 Omba trust had a gallery that had to close down with Covid, but the works have been sold in the National Gallery of Namibia,  South Africa, USA and even the Venice Biennale. They feature in Imago Mundia publications and in the collection of Luciana Benneton. 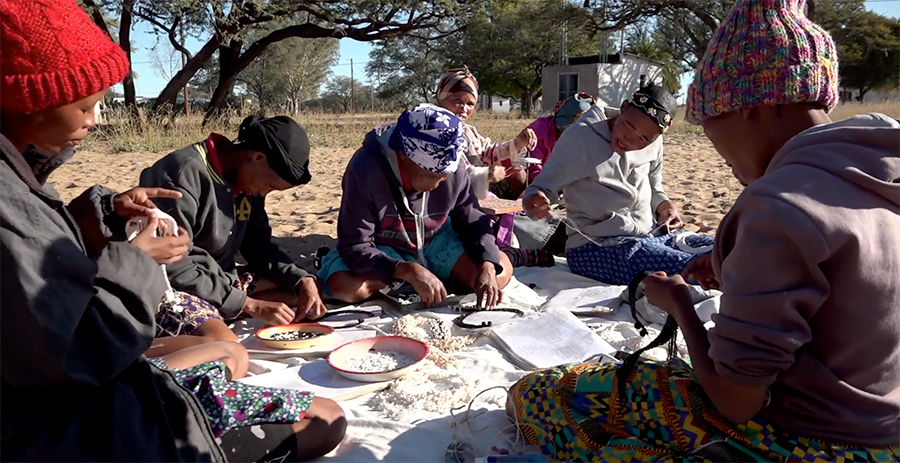