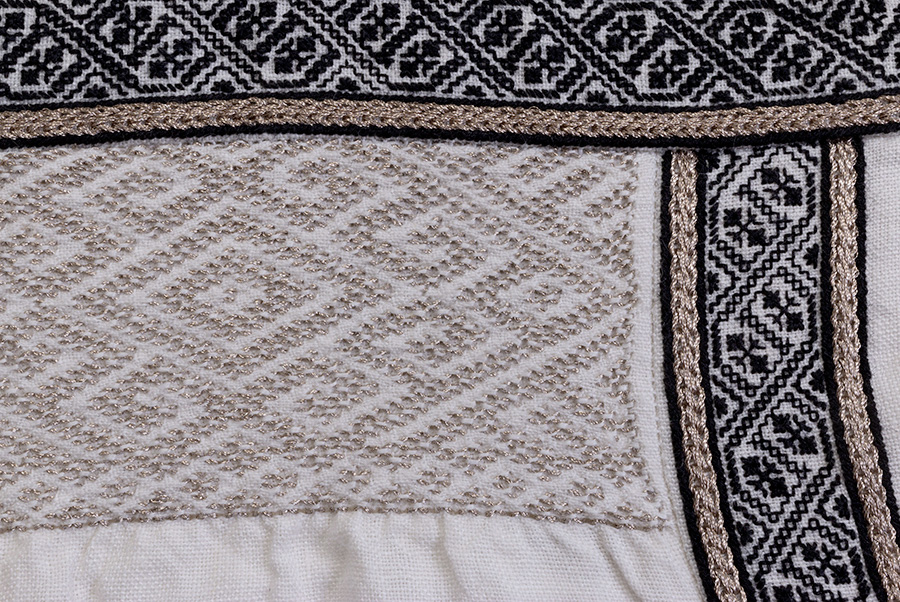 During a few months, we followed the work of Florina, a Romanian embroiderer who decided to stitch her own traditional blouse (Episode 1; Episode 2; Episode 3). Thanks to her, I met Alina Panaite who was willing to share how those old techniques were on the verge to disappear and how they came back for a new life.
Text by Alina Panaite
Images in this article are the property of Semne Cusute Association.

History
Childhood in the seventies in Romania was a charming mixture of traditions and some modern comforts. As a girl, if not at home, at least at school, you’d have dedicated classes where you learn how to sew, embroider, knit, crochet, and cook. I guess I was most fortunate, as my mother, grandmother, and even grandfather were passionate handicraft lovers. They did them all, and I watched them and learnt from them. I can’t pinpoint the exact moment when these handicraft activities became obsolete in our society, but surely at the end of the nineties, nobody considered them useful or entertaining anymore, and they were not part of school syllabus either. It was just like in the fifties and sixties, when our peasants started to buy and wear modern clothes, forgetting about and even disposing of their traditional ones.

It took several decades for Romanians to realize how much they were missing and losing. Committed to recover and pass forward the lost tradition of sewing, in 2012 Ioana Corduneanu, architect, took on the mission to use internet and modern technology, and offer a new chance to Romanian women and their traditional blouse. She started to collect and digitize traditional motifs from across Romanian regions, and made them available for free on her blog “Semne Cusute” (Sewn Signs), explaining the meaning of ancient signs in traditional motifs, how and where they were used on shirts. 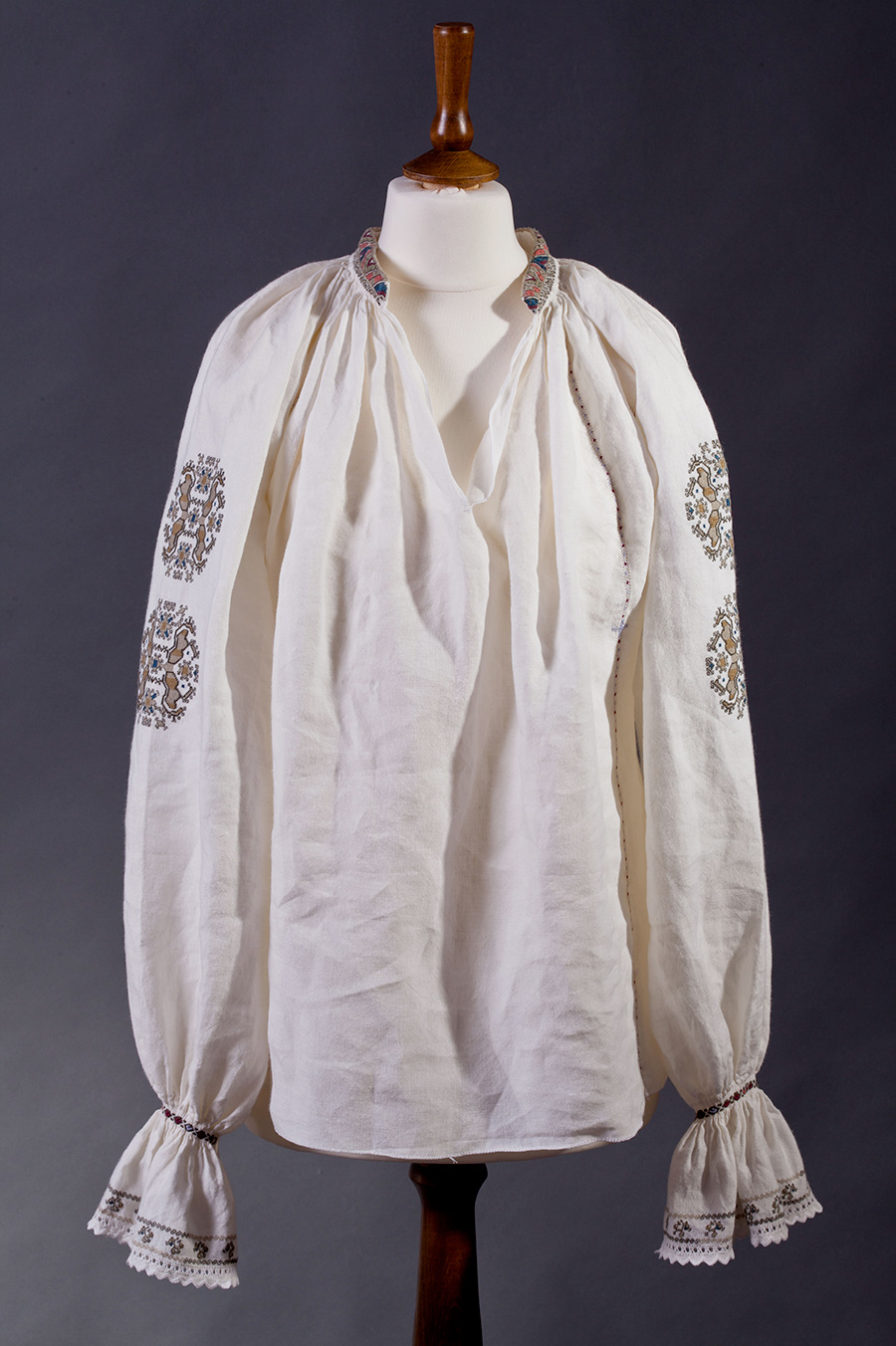 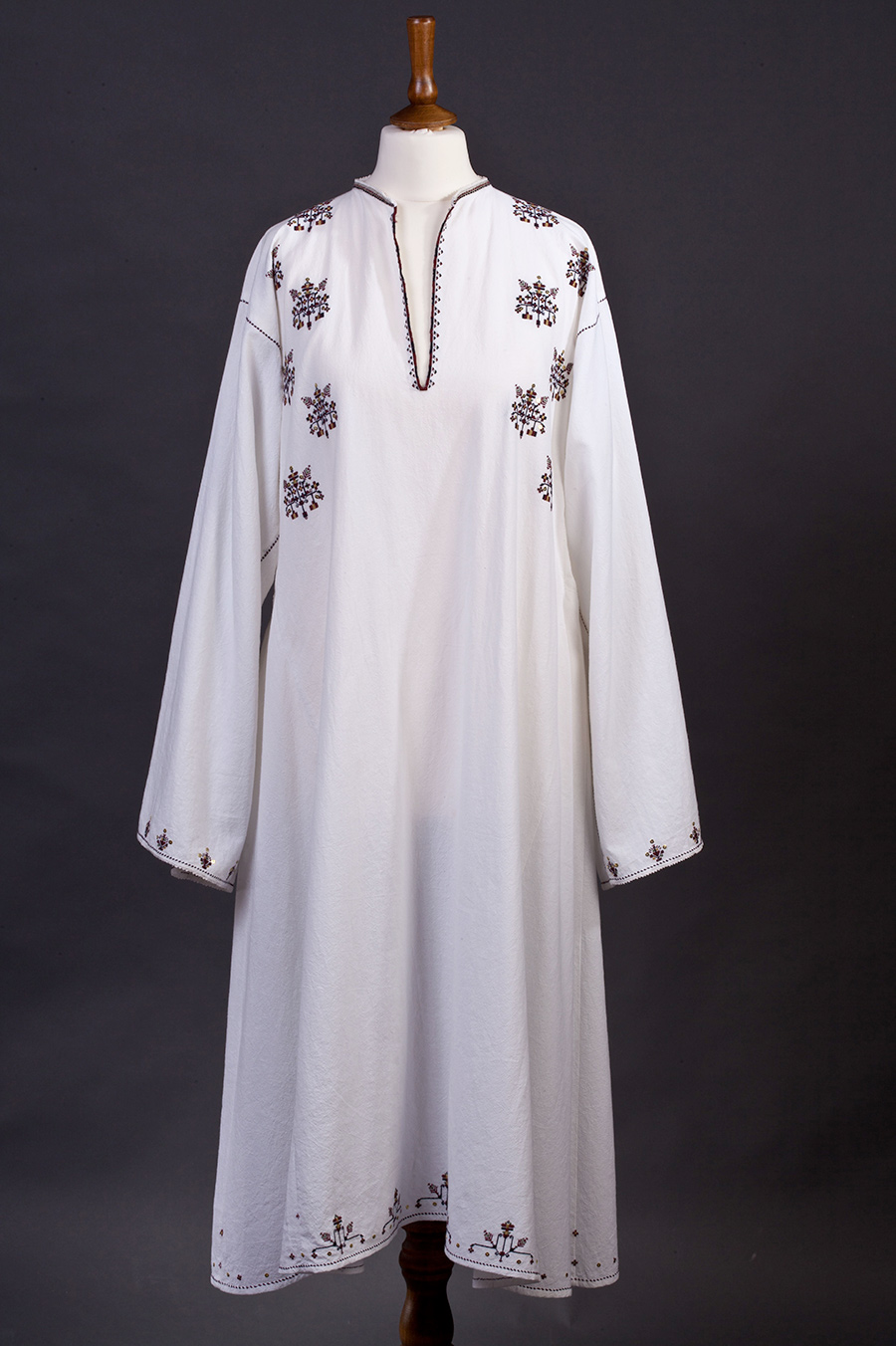 I was again fortunate to embark from the beginning in this movement Ioana started, and not before long, I realized how much I have to actually learn before I can sew my own traditional blouse. As many others in our group, I was fed up with the way Romanian artisans made traditional lookalike blouses. I wanted one for myself, to represent me and my roots, and I spent long hours in shops where artisans’ blouses were sold, but I couldn’t relate to any of them. I decided then that I should be able to make one for myself with what I remembered from my childhood, and some research.
More or less, most of my fellow embroiderer started the same, except maybe younger ones, who didn’t have a chance to learn at home or at school the basics, so they actually started from zero. Thus, a Facebook group was created to allow all these women to present their attempts, to ask and receive advice. They learnt how to cut the fabric in pieces that later on will be embroidered and finally bind as a blouse.

A question of fabric
First results were promising, but from the very beginning it proved quite difficult and challenging to get the true look and feel of the traditional blouses, as some key ingredients were hardly in reach. We learnt together that the right fabric and threads were essential. There’s an amazing diversity of materials and patterns and ornamentation styles throughout Romanian regions, depending on geography, climate, and occupations. However, despite this diversity, there are some elements common to all traditional blouses.

To shape a Romanian blouse you will only need rectangular pieces of fabric, usually smartly cut to fit perfectly in the width of the home woven fabric. No waste; everything was used to build up the shirt. Basically, all rectangular pieces could be gathered around the neck or they could bind to build a T-shape shirt. An incredible variety of styles were created based on those two basic principles, some of those even becoming an identity mark for a certain region. 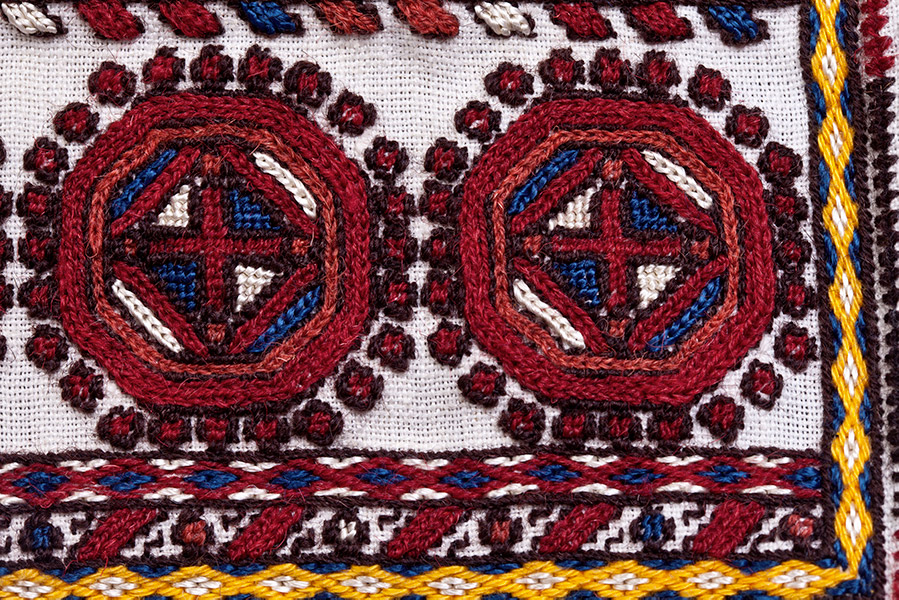 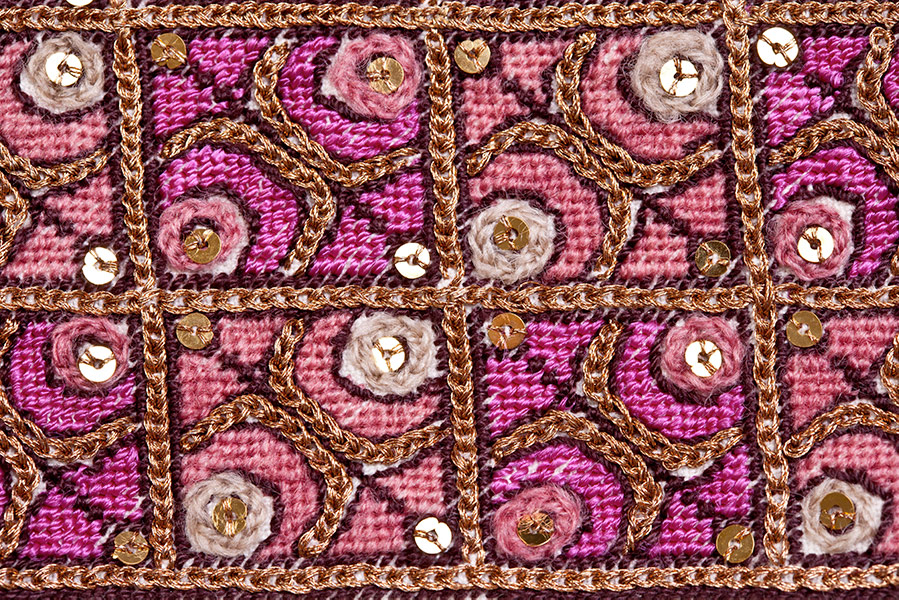 Things weren’t simple with embroidery either. In the beginning, we all embroidered on industrial fabrics. And it was so hard to find the right fabric for the right shirt. Unhappy with the offer, some women in the group got out long forgotten looms, and started to weave again in old style, but not as fast as to meet the need. Other women looked for old fabrics still to be found in small markets; last batches of home woven fabrics abandoned in old trunks by peasants when they started to wear modern clothes. Today, a wide variety of cotton, linen, and hemp fabric is created, and can be purchased from a dedicated online shop, a business Ioana Corduneanu started on her own with the purpose of making easily available the right fabrics and threads for shirts of most Romania regions.

Embroidery
Once we got the right fabric, one would think things would go smoothly. Not so smoothly actually, as more than one generation of women didn’t stitch at all, and the only stitch point remembered by the most was actually the last one entered in use in our traditional embroidery, via Saxon influence in Transylvania, the cross-stitch. There’re some minuses that made this point scarce on old shirts; it was both time and thread consuming. Old points were not only more expressive, but also incredibly simple, and intuitive, and efficient. However, we had to decipher and relearn them, and mostly, convince the others to adopt them, as cross-stitching was still more on hand for most ladies.

Not before long, we also understood how important threads are to a Romanian blouse. Just as important as the paints are to a painter – their colour, their texture would add to beauty. Along with the motifs, they were telling a story about who the women in that region were, their talents, their wishes and dreams, and their strength. To cut without a scissor, to measure without a ruler, and to embroider intricate motifs from their mind only, it’s quite magic.

This is a Romanian traditional technique of smocking the fabric very similar to a running stitch following a certain path and tensing the fabric both horizontally and vertically; it’s used to reduce the size of the rectangular piece joining the shoulder area. This technique was considered lost by experts at the end of 20th century. Other embroidery stitches: chain, double running, and half cross stitches. 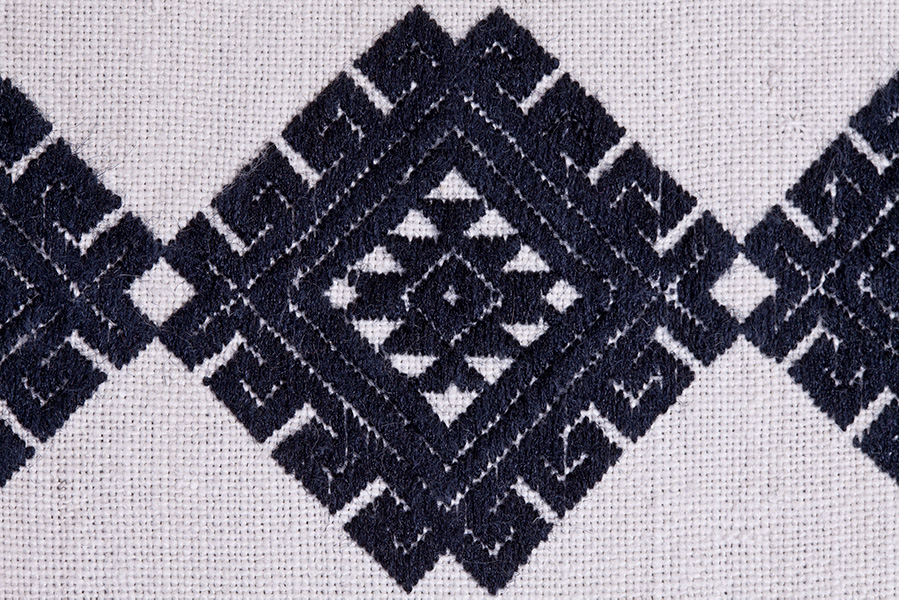 Though our ancestors hardly travelled far from home, rarely beyond their villages’ borders, they seemed to have dreamed big dreams of being the most wanted women, and of wearing the most beautiful clothes, and it was in their power to make those dreams come true. And most of all, they got us 21st century women to share the same dream. That’s how, fairly rapidly, cotton and viscose embroidery threads were replaced by my fellow embroiderers with silk, wool, linen and exquisite mixtures of wool and silk. Once adorning old Romanian shirts, beads, metallic threads, sequins, and silver plate found again their place on new shirts, stirring up admiration. Romanian ethnography museums became interested to not only exhibit the best works of young ladies reviving the art of traditional embroidery; to reward their efforts and encourage them furthermore, they opened the doors of the deposits sheltering their patrimony, thus making old and valuable artefacts accessible for study and embroidery.

This reconnection with old shirts in museums and private collections allowed Romanian women to learn and recover most of the old embroidery styles and techniques, some of them quite unique to our culture, and thought lost long time ago by experts.

Running and double running stitches, satin stitch, chain and square chain, closed herringbone, buttonhole, all sorts of drawn threads and insertion stitches, goldwork were all used to embroider the shirts. Most of these stitches were used as anywhere else in the world, yet with some particularities imposed by motifs. 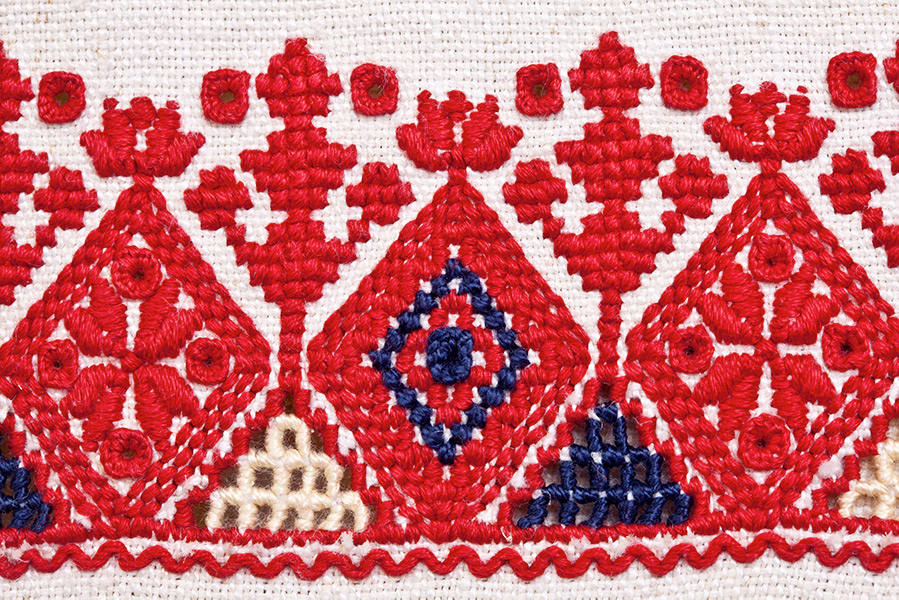 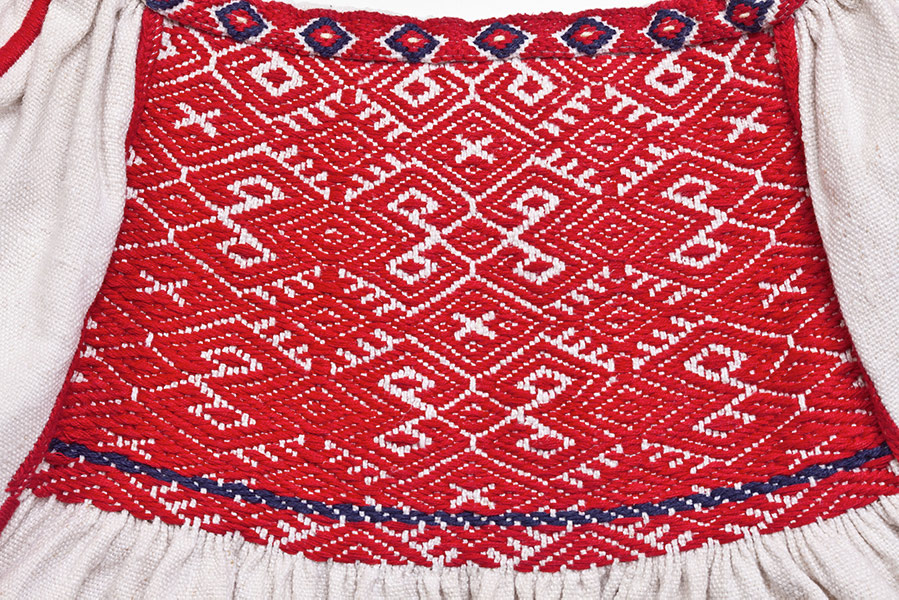 This is another Romanian traditional smocking technique; the fabric is initially folded and gathered with white cotton thread, then coloured threads are guided through and above the folds, forming geometrical ornaments. This technique was considered lost by experts at the end of 20th century.

The future
As a natural outcome, creativity resurfaced, and nowadays for Romanian ladies it’s not enough anymore to reproduce old shirts. They gathered enough knowledge and artistry to express their creativity and talents. A new trend is now coming to the fore – evolving and adjusting the old design principles and ornamentation to better fit the ordinary life. Women want more than merely a reconnection to traditional shirts, they want to bring them into modern times. And there’s still energy and resources to do just that. This new project has just been launched last summer, on a web site where these new designs are available to buy along with new shirts made in traditional style. 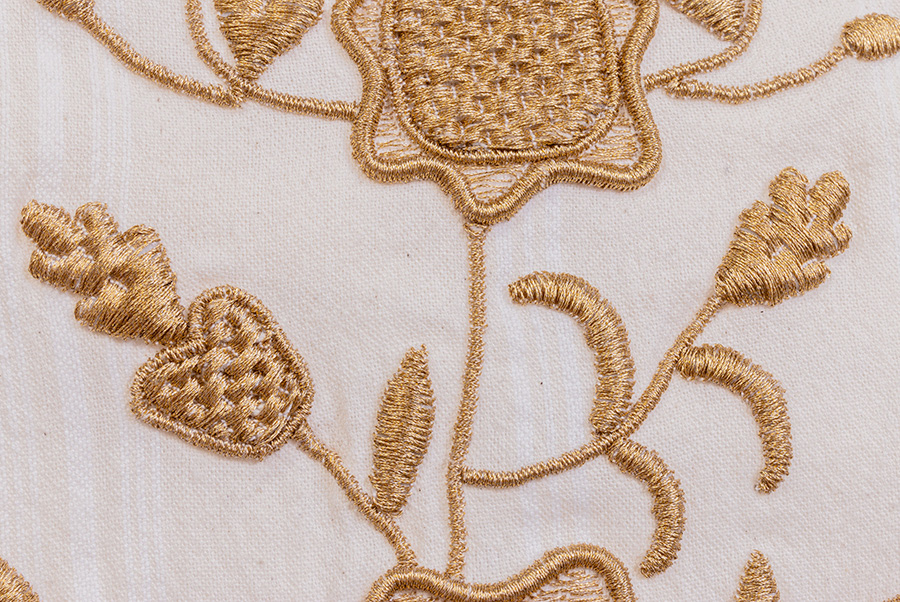 Motifs on a blouse sleeve from the West of Romania (metallic thread on cotton fabric). Embroidery stitches: goldwork. This technique came from Byzantium, spread to nobility attires from religious garments, then became very popular in the South-West of Romania, first on shirts, then on aprons and some head accessories.
Author: Alina Panaite / Exhibition: Aievea, by Semne Cusute Association / © Raluca Savulescu 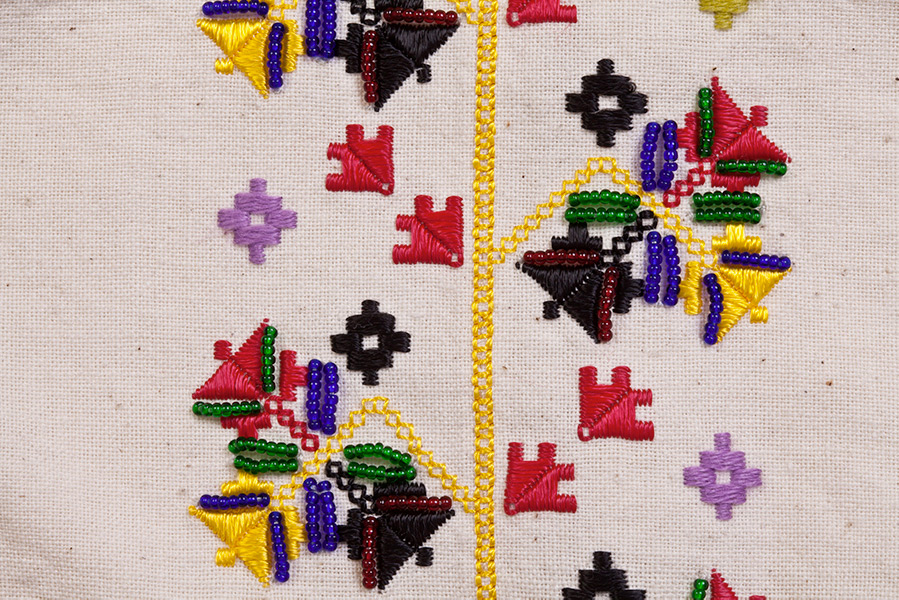