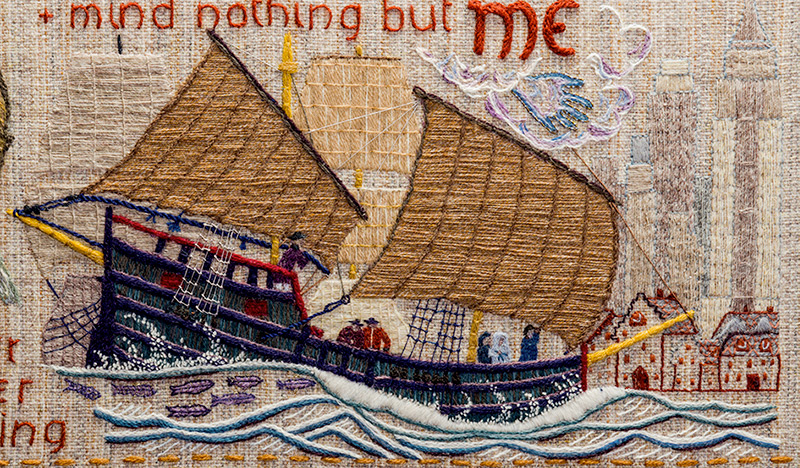 A warm thank you to Bridget Guest, general manager of the Quaker Tapestry Museum (Kendal) for her generous help and collaboration!

1 – History
In 1981, Anne Wynn-Wilson, a professional English embroiderer of the Quaker denomination, was teaching the history of this movement to young Jonathan, when he offered to embroider these characters and their achievements. 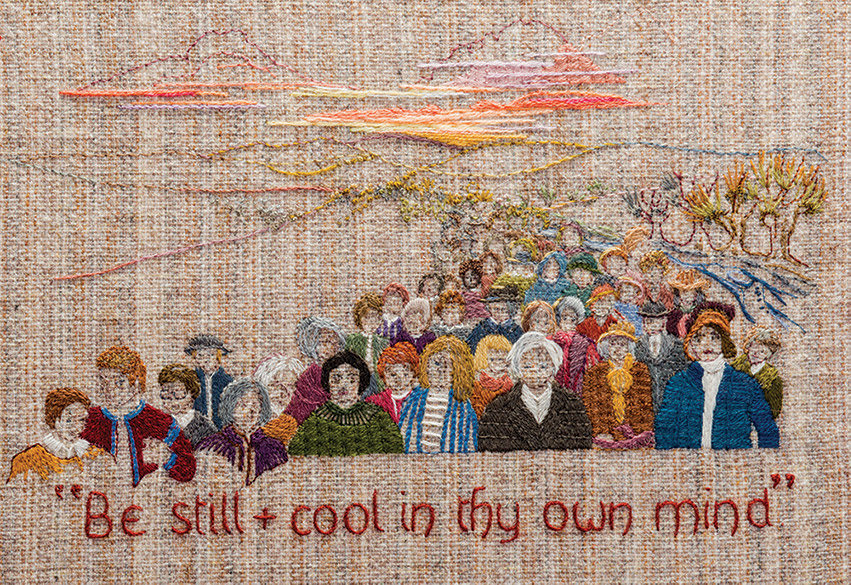 Anne decided to set up a project that can unify the often isolated elderly people while allowing the training of young Quakers. The Quaker Tapestry was born.
In the end, there are 77 panels measuring 64 x 54 cm that retrace more than 300 years of human and religious history.

Quakers are known for their moderation, and it has not always been easy to convince many of the seriousness and importance of this colossal task.
However, it is thanks to the structures of the movement (local, national and international meetings) that Anne will be able to present her project and secure growing support. There are the embroiderers, and those who wish to help them: administration, logistical and legal support, historical research, and fundraising. A committee was created.
Funds were necessary because for Anne, this adventure had to be done on a professional level: from the materials used to the historical accuracy of each design, everything had to reflect the tradition of quality of the Quakers. 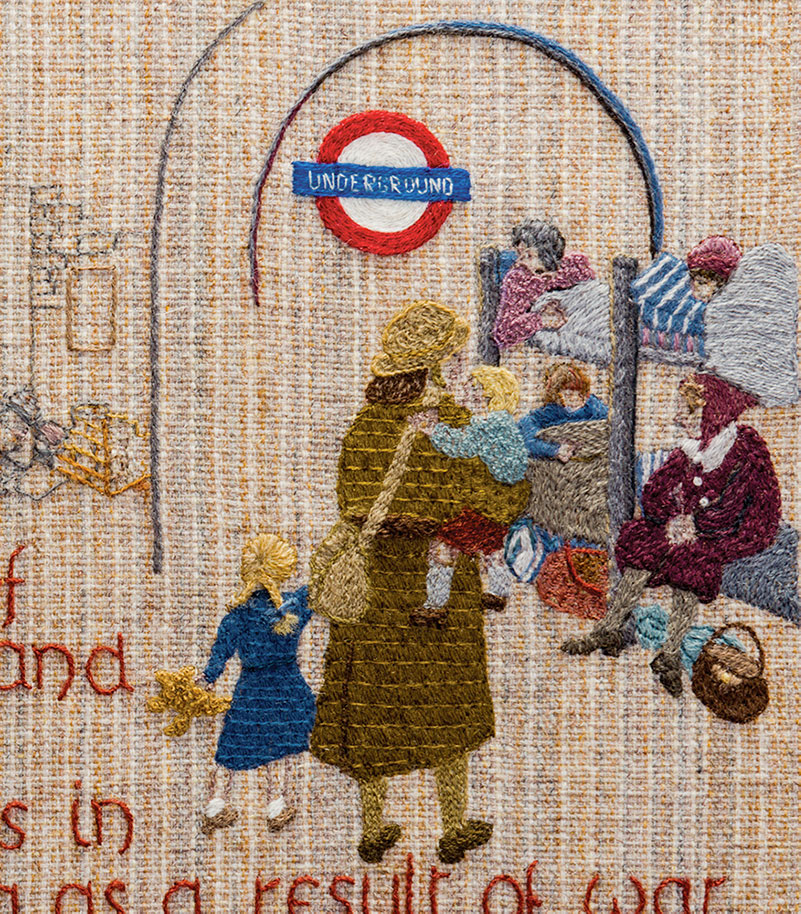 The ground fabric: This one had to be of very good quality, being able to withstand the mistakes to be unstitched and the many handlings. The color was supposed to allow the Bayeux convention to be used: the edges of human faces and buildings are embroidered, but not the background. A woolen cloth was therefore specially woven. 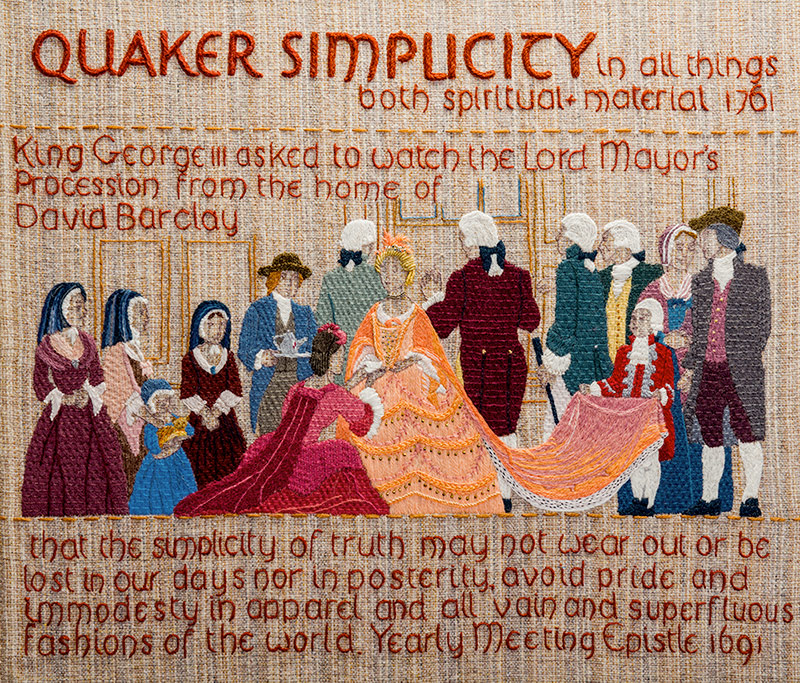 The stitches: The 5 stitches selected were supposed to be able to meet all the needs. The chain stitch was thus used to embroider a silk dress, a thatched roof, a stone wall, the bark of a tree or a woolen sweater. The stitches were: the stem stitch, the chain stitch and the Bayeux stitch, the split stitch and the Peking knot. Quickly Anne Wynn-Wilson added a stitch she created, the Quaker Stitch, used for letters. This stitch will subsequently be recognized by The Royal College of Needlework.

These limitations followed the techniques of the Bayeux Tapestry, and allowed everyone to be able to participate in the embroidery, these stitches being easy to learn. In the end, 4000 people in 15 countries will have participated in this work. 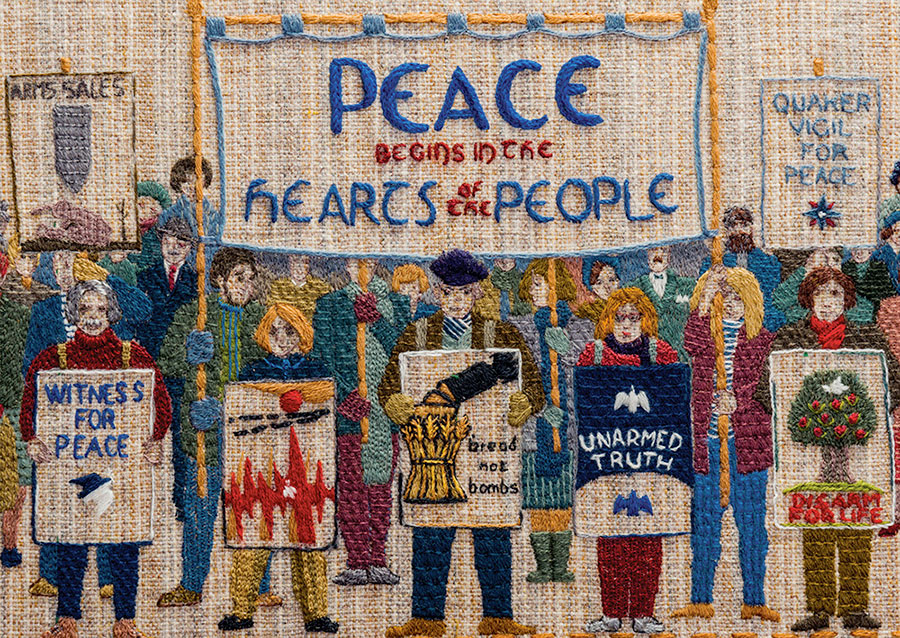 Conventions: to ensure unity of work, each panel must be embroidered following the same conventions. Colors are limited to 120 and never more than 40 per panel. The panels of the first centuries were embroidered in natural colors, those after 1850 (and the discovery of aniline allowing colored dyes), with more vivid colors.

Embroiderers often struggled with faces: “I had to do and redo Margaret Fell’s face several times. I always made her so sad! Fortunately the fabric was strong! ” (Margaretta Playfair, 1983). A solution was found: in order to make historical figures real, the stitchers learned about their characters or gave them the traits of famous people. 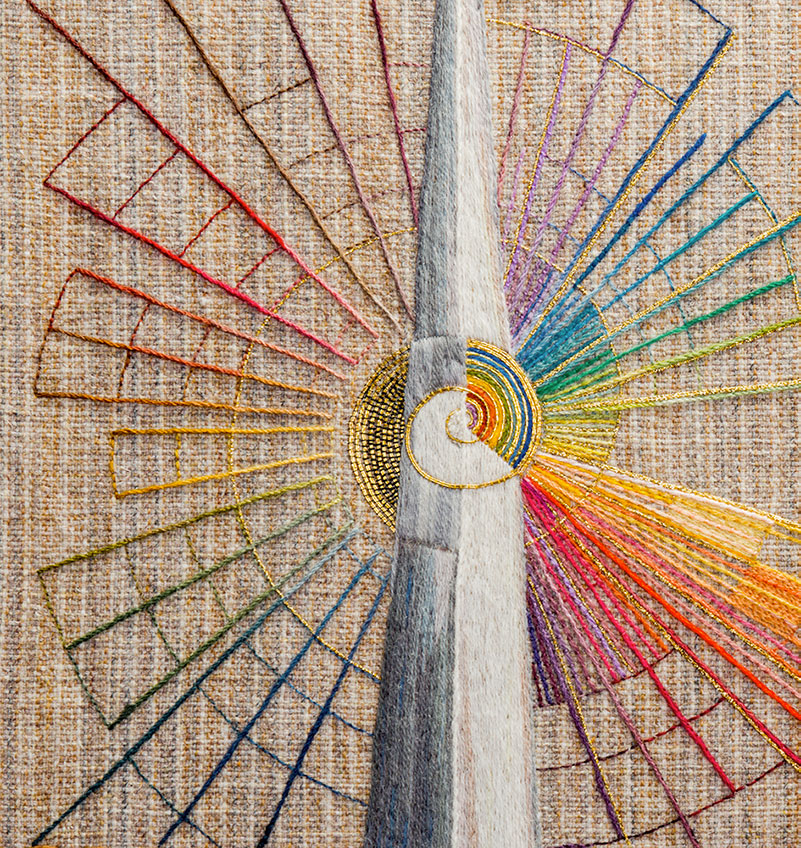 Prism – First panel: the prism reflects the diversity born from the same source © Quaker Tapestry
Note: this is one of the rare panels embroidered with gold threads

Voyage of the Woodhouse © Quaker Tapestry

This huge adventure, which lasted eight years, had a very strong impact, both on the spectators and on the embroiderers. An embroiderer suffering from paralysis after an accident: “Drawing the waves and their foam jets around the boat, I felt like I was dancing again!” A group of embroiderers from Scotland made a long journey to visit the Parliament and see the details of wigs from such and such an era up close.
There was also a lot of frustration due to errors: color 553 and not 533 had to be used for thatched roofs and all the roofs had to be redone! A chemical formula also had to be corrected, for the sake of authenticity.
Other groups did not want to stop and decided to create their own panels, retracing the history of their region.

3 – Administration
At the heart of this work were the workshops. This is where embroiderers learned the stitches, exchanged ideas and research, got to know each other.
In addition to the embroidery work, this adventure allowed many people to open their horizons or to embark on unknown tasks: making transport boxes or historical research, drawing panels, organizing meetings, etc.
To raise the necessary funds, kits containing all the material were sold. They also allow future embroiderers to learn the ropes. A paid subscription to the newsletter, the sale of booklets, maps and then books ensured daily life. The first panels executed were on display and there were a (modest) fee for admission. Donations were also numerous.
Committees in charge of these various tasks were created, in particular to organize the Embroidered Holidays or Embroidery Weekend-Workshops.
Another activity will require more and more work: exhibitions. 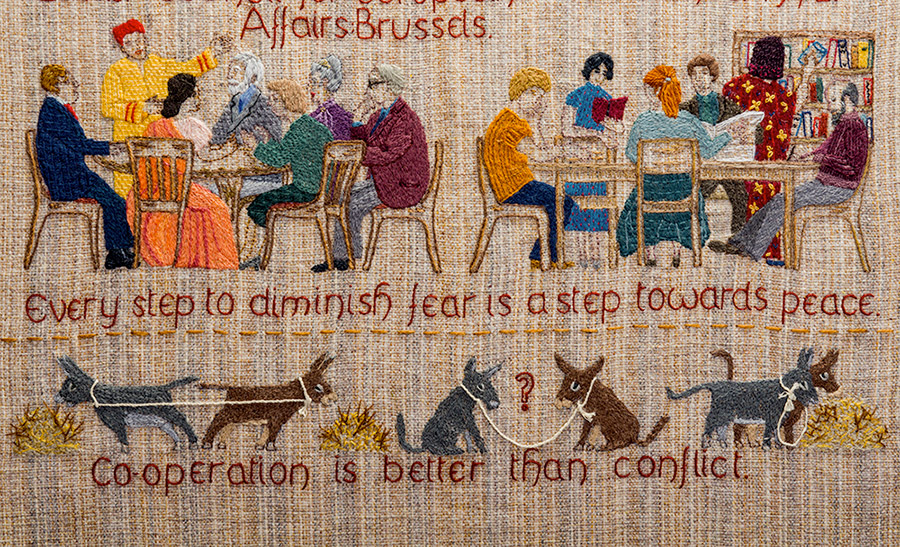 4 – Travel
The Quaker embroidery has traveled a lot. Not only between meetings and embroiderers’ houses, but also across England, and, very quickly, across the world. This allowed a lot of people to add a few stitches to this adventure, while also securing the necessary funds to complete it.
The panels specific to certain countries were embroidered on the spot: Canada, Australia, New Zealand, South Africa. The panel The Global Family of Friends has been embroidered in Switzerland, Scotland, the United States and England. 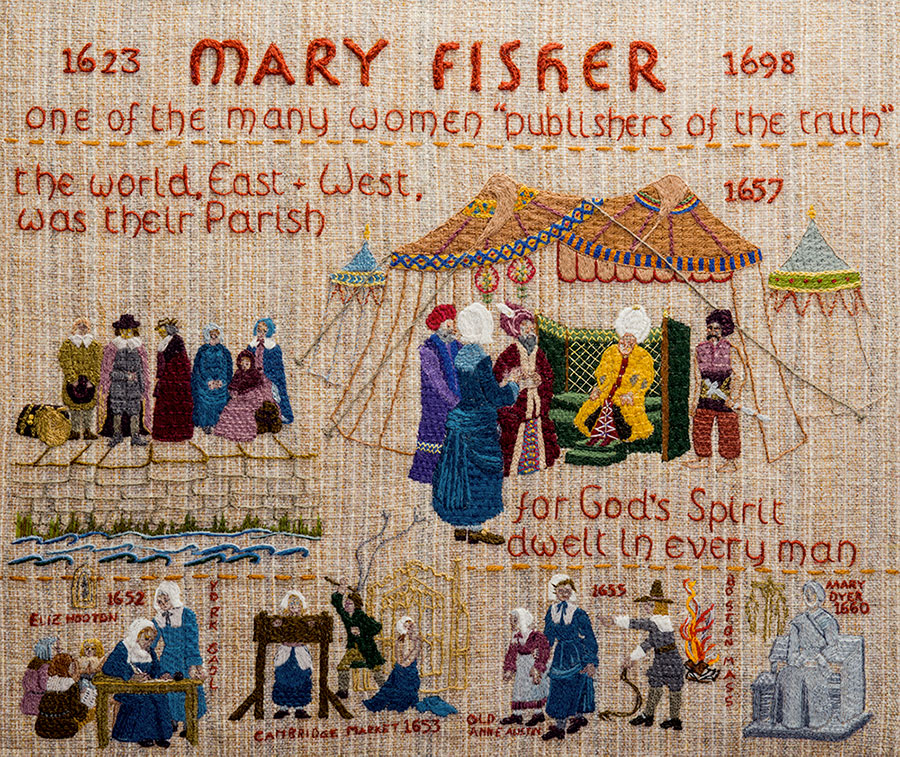 6 – Independence
The project became independent in 1986 under the name The Quaker Tapestry Scheme, enabling it to raise funds. Over the years, the project received more and more media attention and copyright issues had to be resolved.
In 1989, all panel designs were completed (the last stitch will be embroidered in 1996). A new stage began. The new committee was in charge of the protection and exhibition of the panels, the various publications and above all of finding the funds and a suitable place for its permanent exhibition.

According to curators at the Victoria and Albert Museum, the embroidery cannot be exhibited more than 3 times a year or it may get damaged. To meet this measure and the many requests to display the panels, very high quality photos were taken. They are of the size of the panels. Between July 29, 1989 (first public exhibition of all panels) and April 25, 1994 (installation of the panels in their permanent home in Kendal, Lake District), more than 100 exhibitions were held.

A very well edited little book retraces this adventure in detail (in English). You can order it here. It only costs £ 5.

You can also see all the panels here.
A large number of tapestry-related items (such as kits, books, maps, DVCs, etc.) are also for sale in the store (and online) at the Quaker Tapestry Shop in Kandal.