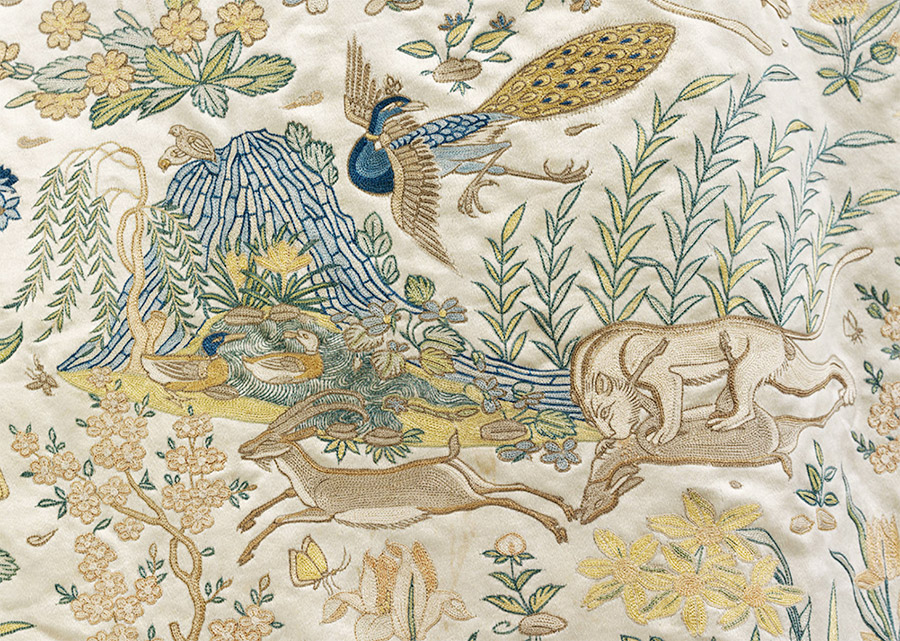 Article published by the Victoria and Albert Museum – Link to the original article: https://www.vam.ac.uk/articles/indian-embroidery

Our collection of Indian textiles ranges from rare courtly pieces to archaeological fragments, to everyday garments and fabrics, dating from the 14th century to the present day. Embroidery remains one of India’s most recognisable and most prized textile traditions. Discover eight of the most well-known forms of traditional Indian embroidery, and how these techniques are today being adapted to give India’s textile history new global relevance.

Chain-stitching
The extremely precise repeat chain stitch embroidery of Gujarat, worked by professional male embroiderers, was so fine that it became sought after by members of India’s Mughal court (early 16th – mid 19th century). One particularly stunning example in our collection is an early 17th-century silk embroidered satin hunting coat. 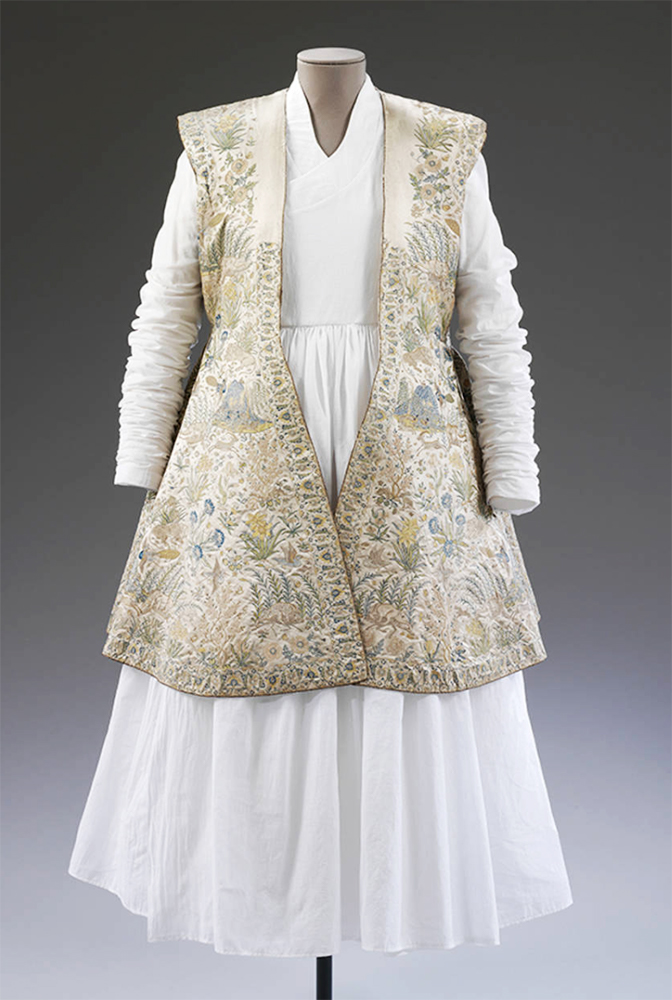 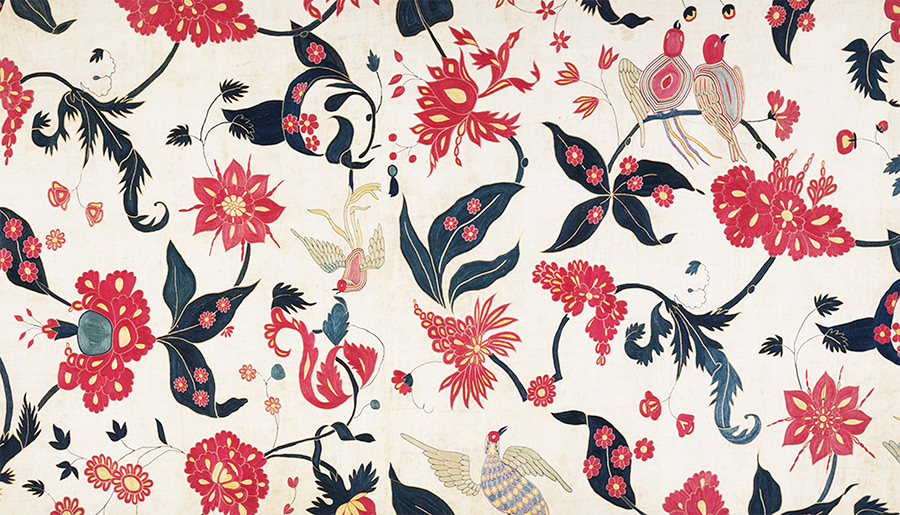 Gujarati chain-stitching was also traded to the West through the East India Company in the 16th, 17th and 18th centuries; the exotic patterns became popular in Europe for furnishings and bed hangings.

Ari work is a kind of chain-stitching done using a hooked needle called an awl. The technique likely originated in the Mochi community, a group that traditionally made and repaired footwear. Originally developed for embroidering decorative elements onto leather shoes and horse trappings (harnesses and ornamental coverings), ari was later adapted for use on cloth.
This video shows the ari technique being used to make a lehnga (skirt) – from traced outline to finished product – at the Sankalan embroidery workshop in Jaipur, Rajasthan: https://youtu.be/kbyE1JEJug0

Zardozi
The name of this technique is derived from two words: zar (gold) and dozi (work). Zardozi is an extravagant form of embroidery characterised by the use of gold or silver wrapped-threads and embellishments. There are many varieties of zardozi: one form, called tilla work, is created by twisting gold and silver-wrapped thread into tiny spirals which are tacked down (couched) to hold them in place.
Zardozi was a favourite form of embroidery for palace furnishings and animal trappings in India during the 18th and 19th centuries, and is still used to decorate special occasion garments, although the expense of the materials means that modern forms of this embroidery often use imitation gold and silver. 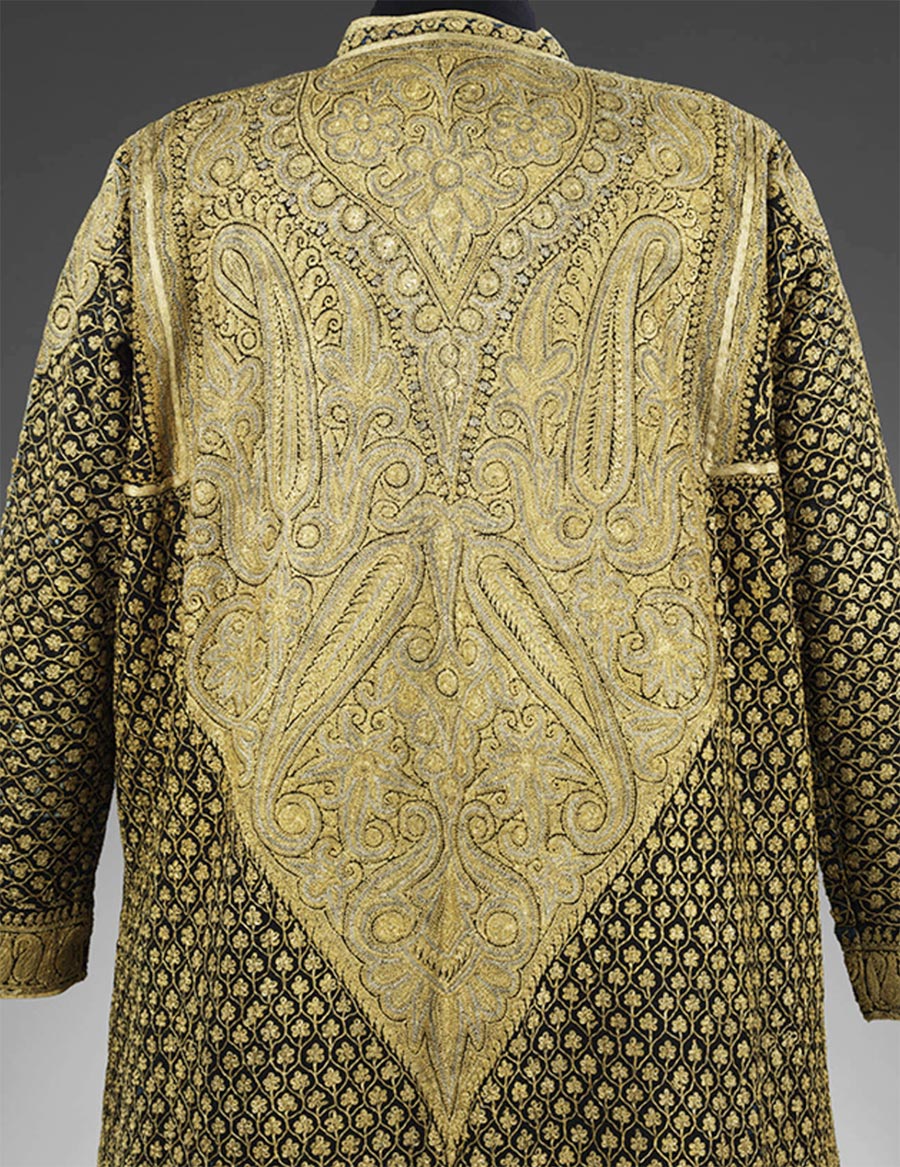 Robe, wool and silk with gold embroidery, makers unknown, about 1855, Amritsar, India. Museum no. 0197(IS) © Victoria and Albert Museum, London 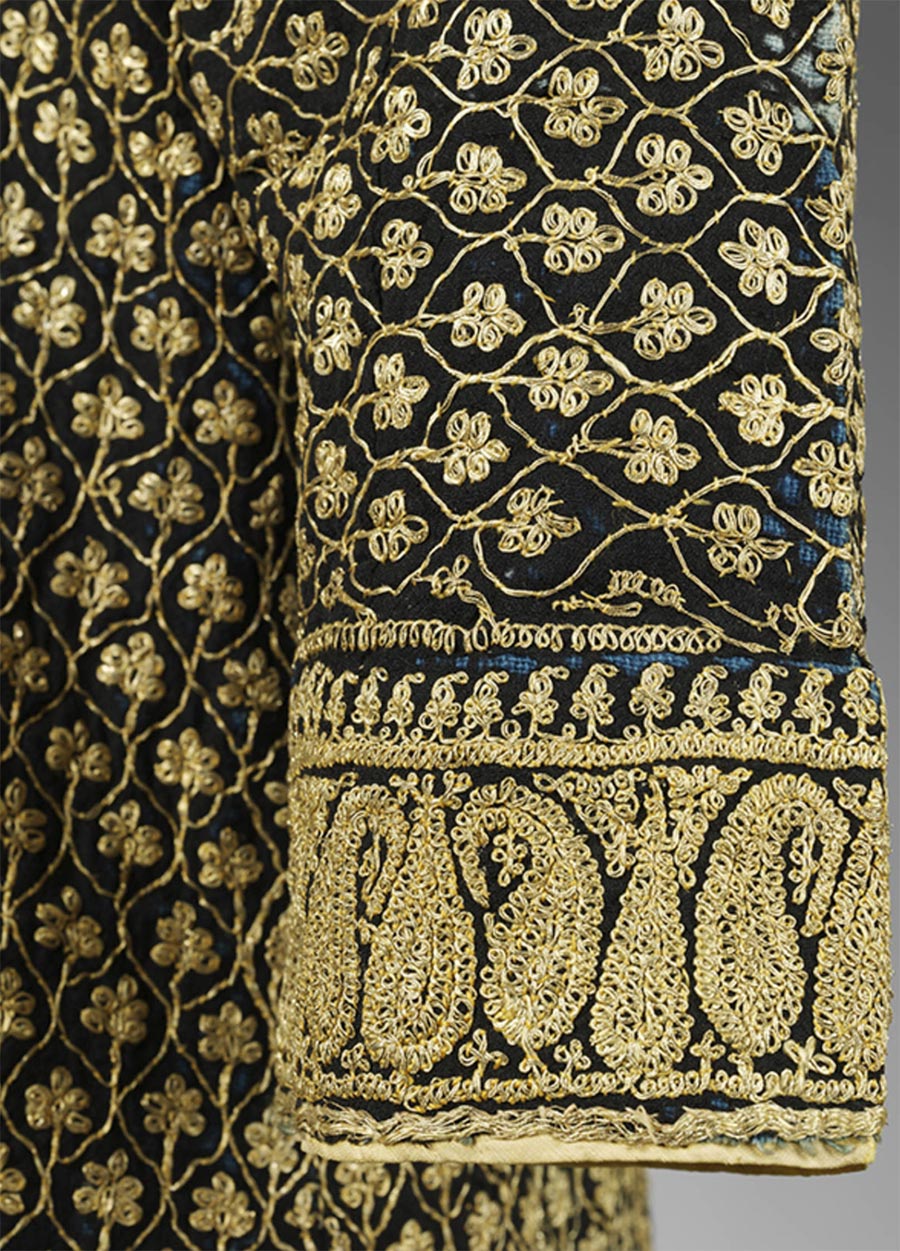 Chikan
Chikan is a type of white-work embroidery worked in very fine stitches on delicate cotton fabrics. The finest examples are usually attributed to Lucknow (the state capital of Uttar Pradesh in northern India), which specialises in the technique. Traditionally, chikan textiles are collaborative: specialist embroiderers work particular stitches then hand the piece on to someone else for the next stage. Extremely labour intensive, chikan employs a repertoire of around 35 different stitches that can be divided into three groups: flat stitches, raised and embossed stitches, and ‘jaalis’, the open, trellis-like stitches in which tiny holes are opened in the cloth. Chikan nearly always uses floral patterns or motifs and the work is generally very intricate. 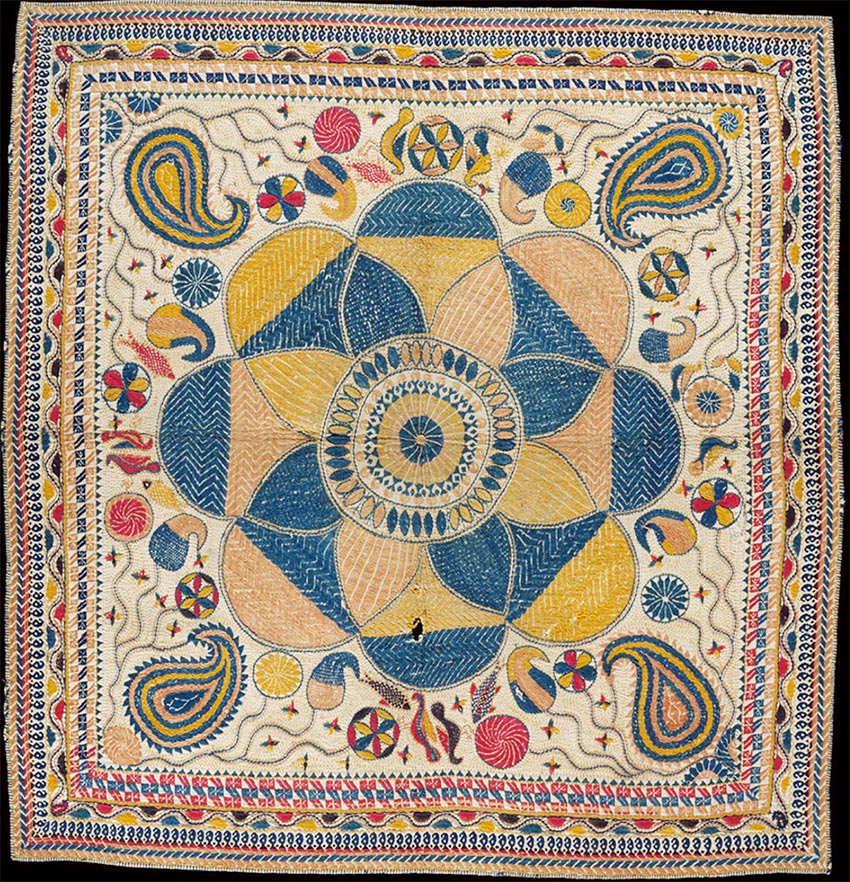 Kantha
A type of embroidery from West Bengal and Bangladesh, kanthas are mats, covers, bedspreads and other household textiles traditionally made out of old and worn out garments, such as sarees (a women’s garment worn draped around the body) or dhotis (a man’s garment draped around the lower body). Layers of this recycled cloth are quilted together in simple running stich, and embroidered designs are added using darning stitches, satin stitch and buttonhole stitch, among others. Traditionally, the coloured embroidery thread was drawn from the borders of the old garments used to make the kantha.
The kantha tradition transforms worn-out textiles that would otherwise have been thrown away into beautiful pieces with unique, personal designs.

Find out more about kantha in our collections. 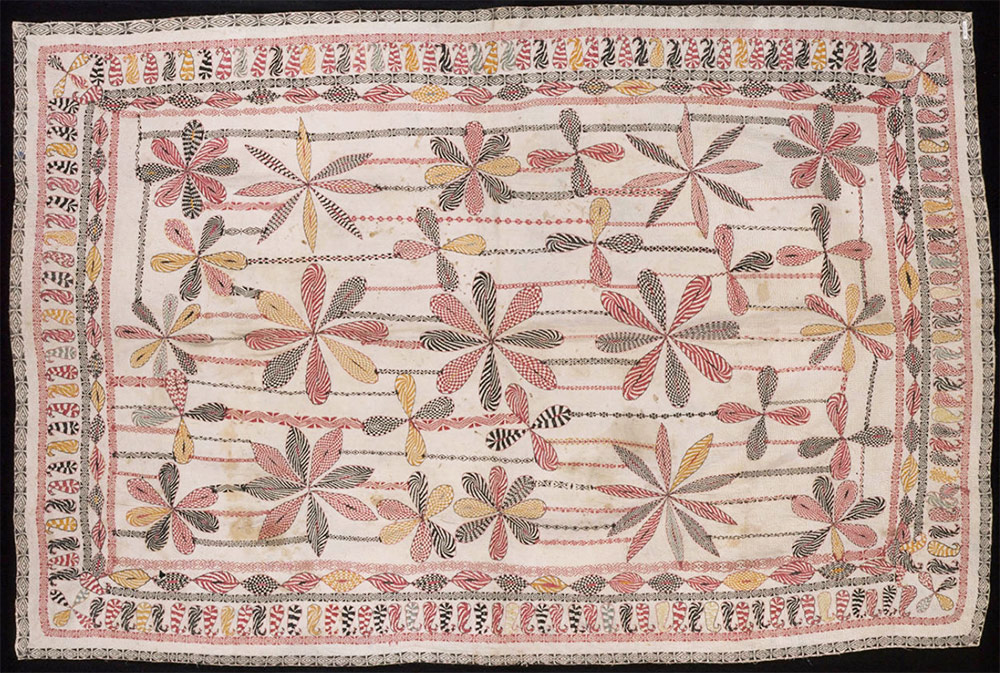 Phulkari
The traditional embroidery of the Panjab (an area encompassing parts of northern India and eastern Pakistan), phulkari (literally, ‘flower work’) is worked in a simple darning stitch from the reverse side of hand-woven cotton cloth, usually dyed terracotta red or indigo blue. Vibrant floss silk (loosely twisted spun silk thread) is used to create a lustrous effect.
There are many different styles of phulkari work, reflecting the rich cultural and religious mix of the Panjab region. The finest pieces are headcovers in which nearly the whole cloth is covered with dense stitching. These are called bagh (garden), and are traditionally made in preparation for weddings. A single bagh may take over a year to complete. 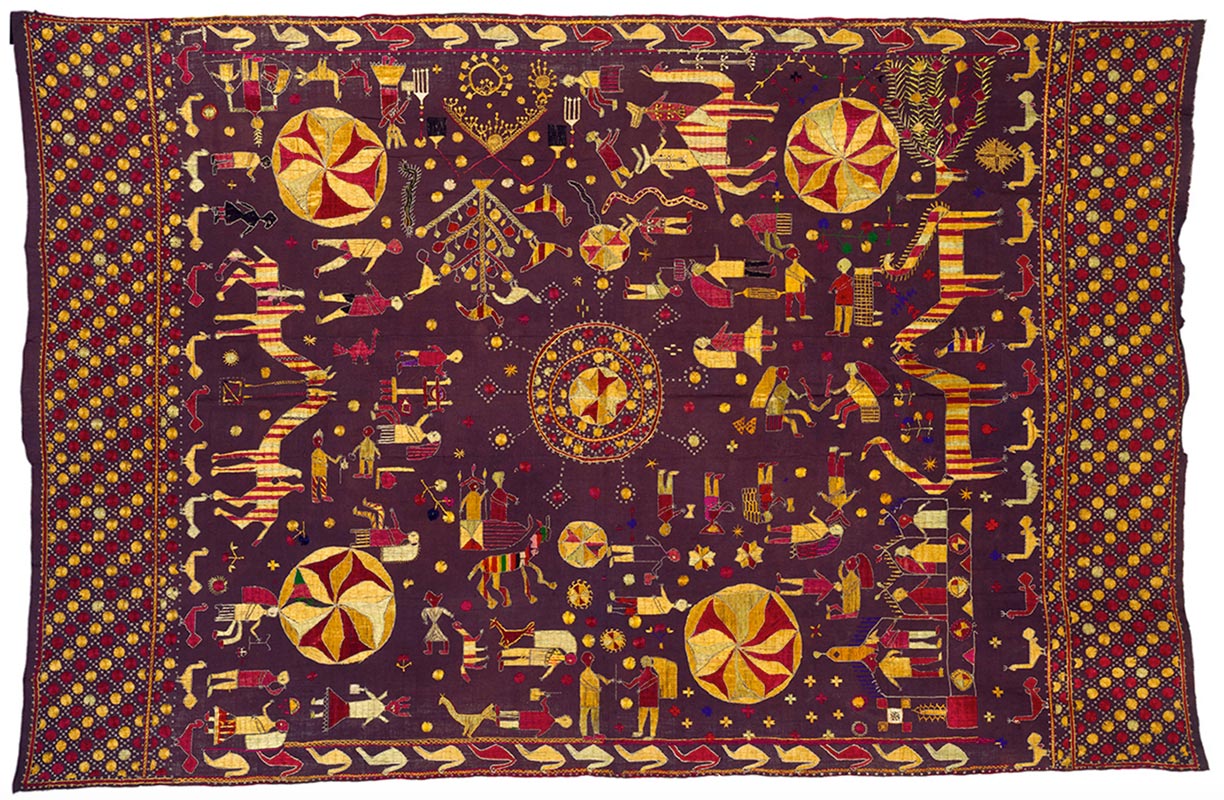 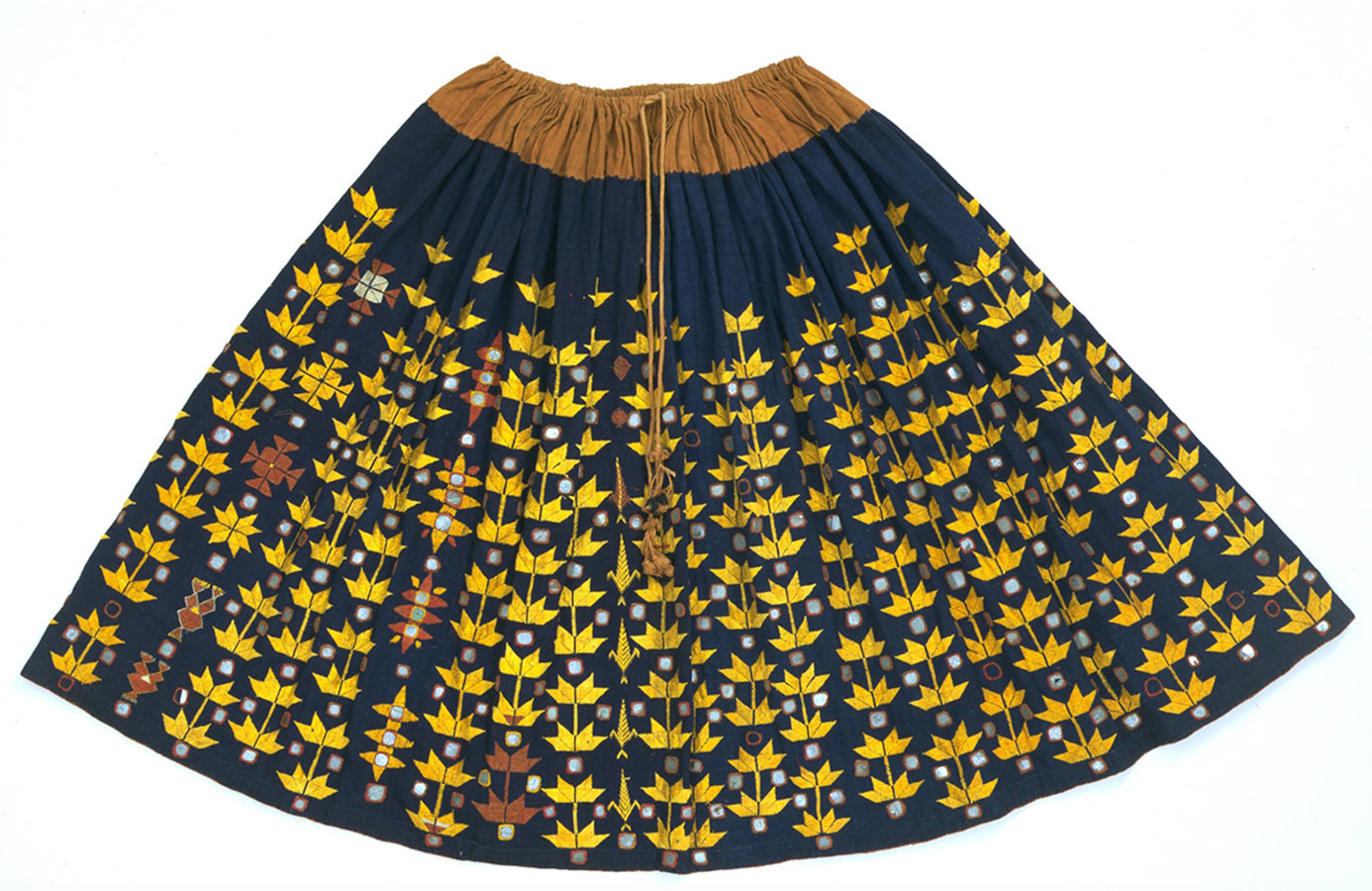 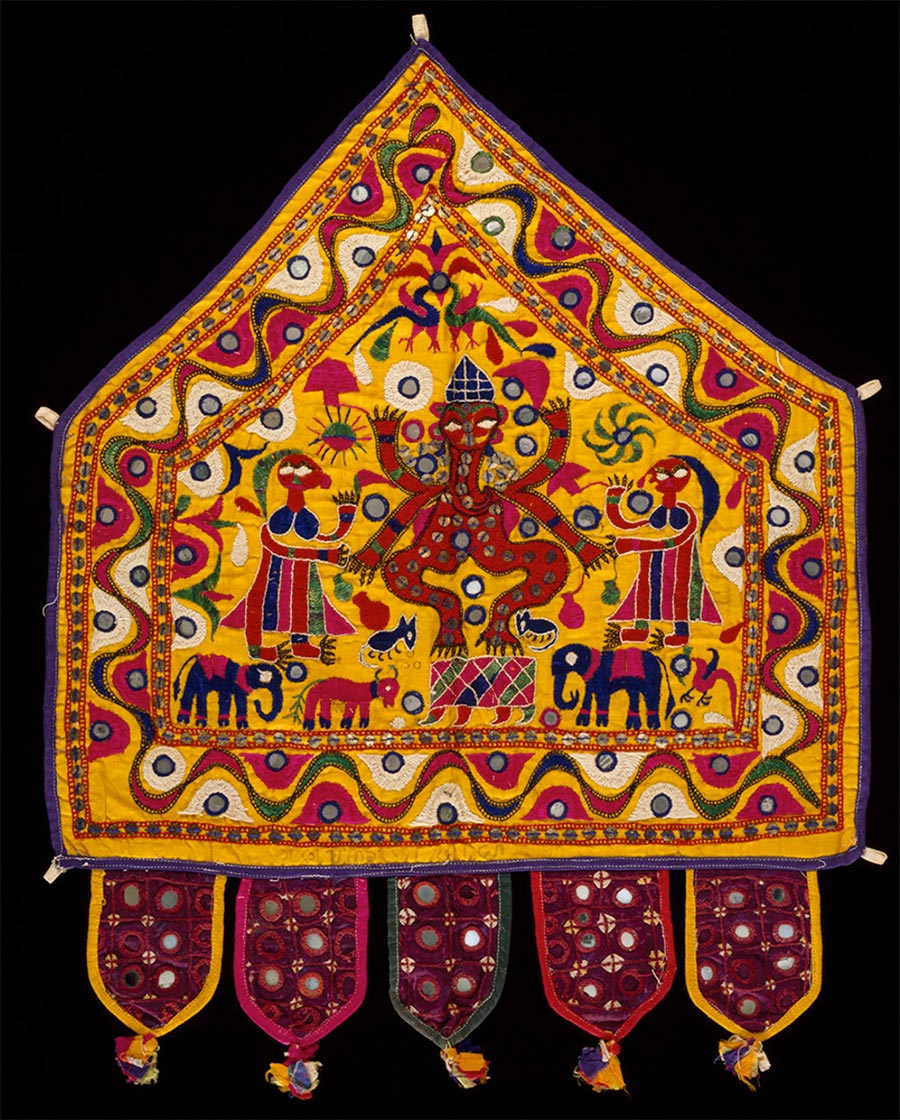 Shisha
Shisha (glass) or mirrorwork embroidery is most common in India’s north western states, with Kutch, a district of Gujarat, a particularly rich source. Beyond solely decorative use, some communities believe mirrorwork is auspicious as a tool for warding off the evil eye, reflecting bad luck and evil spirits away from the wearer.
The reflective elements of shisha work may have originally developed from the use of naturally occurring mica (a mineral with a shiny surface). However, from the 19th century onwards pieces of specially made mirrored glass were widely available. Traditionally, mirrored glass was blown by hand and then cut into different shapes, using special scissors dampened to prevent shards from scattering. Today thicker factory-made glass is more common. 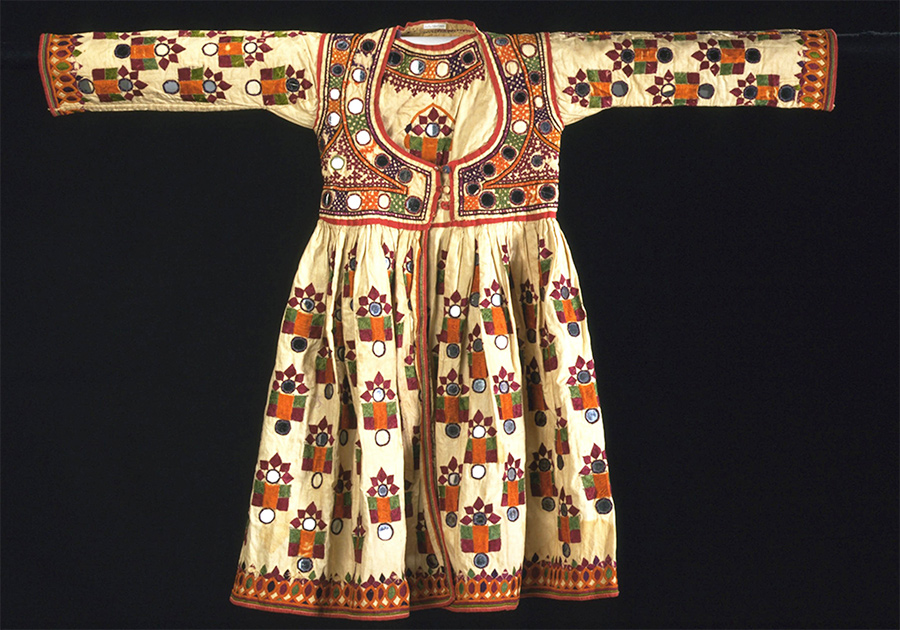 Beetle wings
Fabrics lavishly decorated with the iridescent wing-cases of Buprestidae beetles (better known as jewel beetles) were particularly fashionable in the 19th century, although the technique is likely much older. The cases were pierced with holes and clipped into shape then sewn directly onto the fabric ground. Designs were built up using hundreds of cases, frequently in combination with gold-wrapped thread and embellishments.

The iridescent wing cases sparkled on headcovers, blouses, and accessories. Beetle-wing-case embroidery also became popular with western women who made gowns and accessories out of beetle-wing-case embroidered muslins and nets. The shimmering emerald colour is not a pigmentation but a result of the microscopic structure of the cases themselves, which naturally reflects green-blue light. Although they were valued for the permanence of their colour, durability and relative hardness, the wing cases were still fragile and could snap, so were often used only as trim. 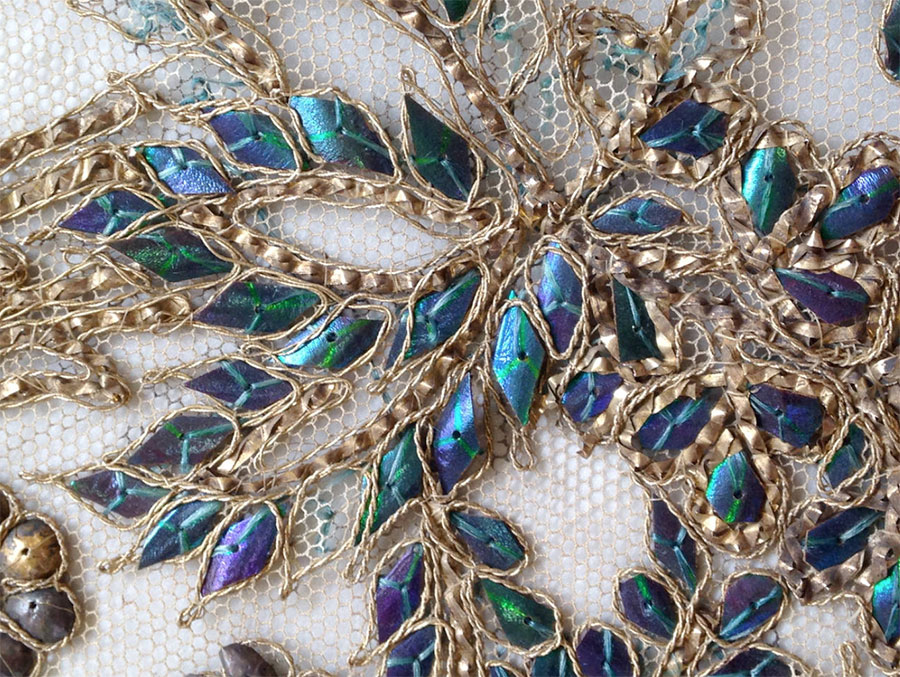 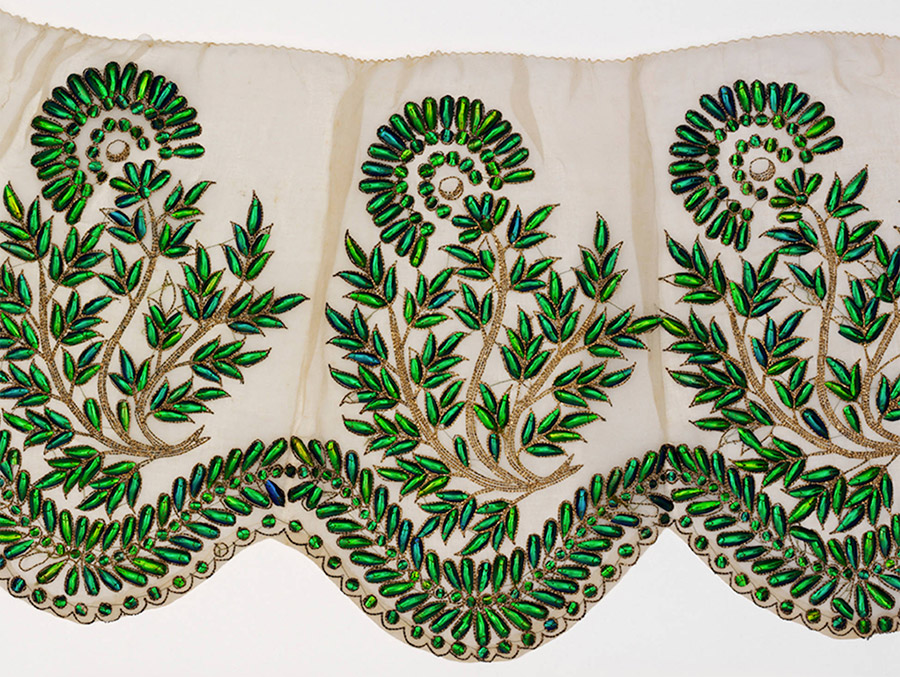 Banjara
The Banjara community originates from nomadic tribes who worked as the travelling suppliers of cattle, salt and grain to the Mughal armies. Their distinctive colourful embroidery embodies this tradition, being used to help make robust garments and storage bags capable of withstanding the day-to-day rigours of a life lived constantly on the move.
Banjara women often wear colourful dress and heavy jewellery. Embroidered items in Banjara households are also striking, with entire surfaces often filled with colourful, geometric designs. The stitches used in this form of embroidery are variations of the flame-like Florentine stitch (also called bargello), tent stitch (sewn on the diagonal) and satin stitch (flat stitches that entirely cover a section of fabric). Pieces are often further embellished with pompoms, cowrie shells and mirrors. 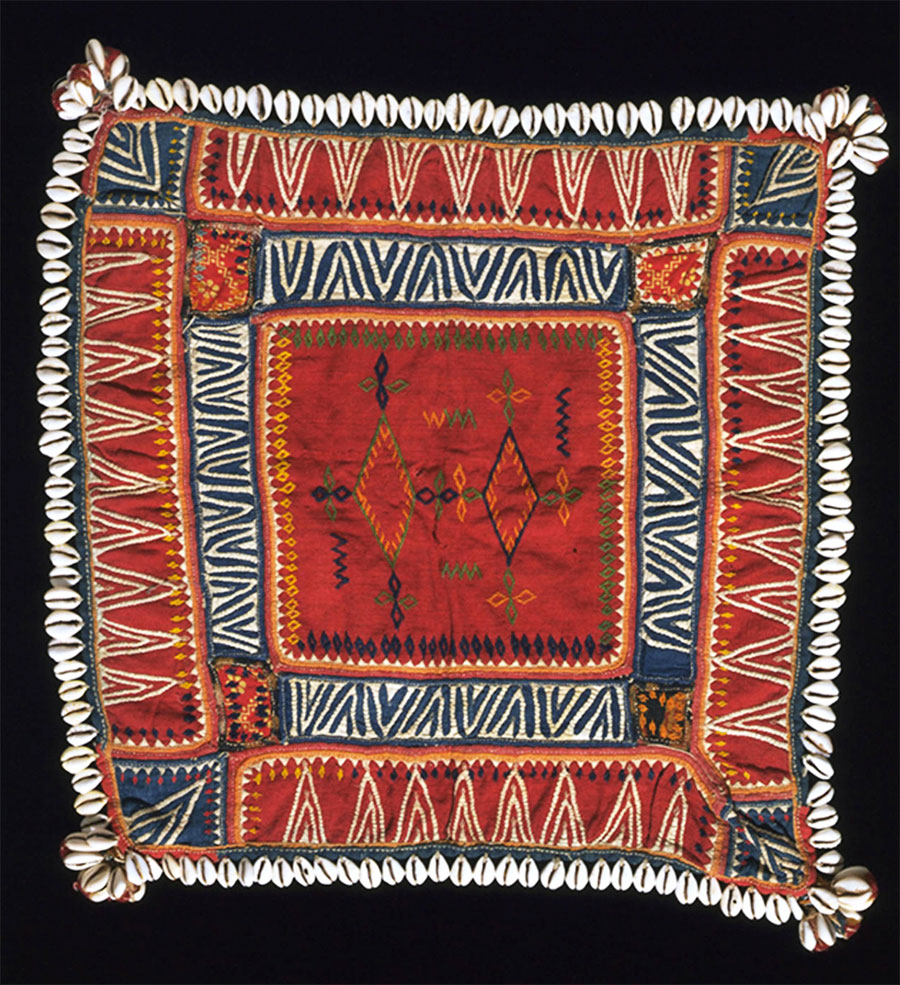 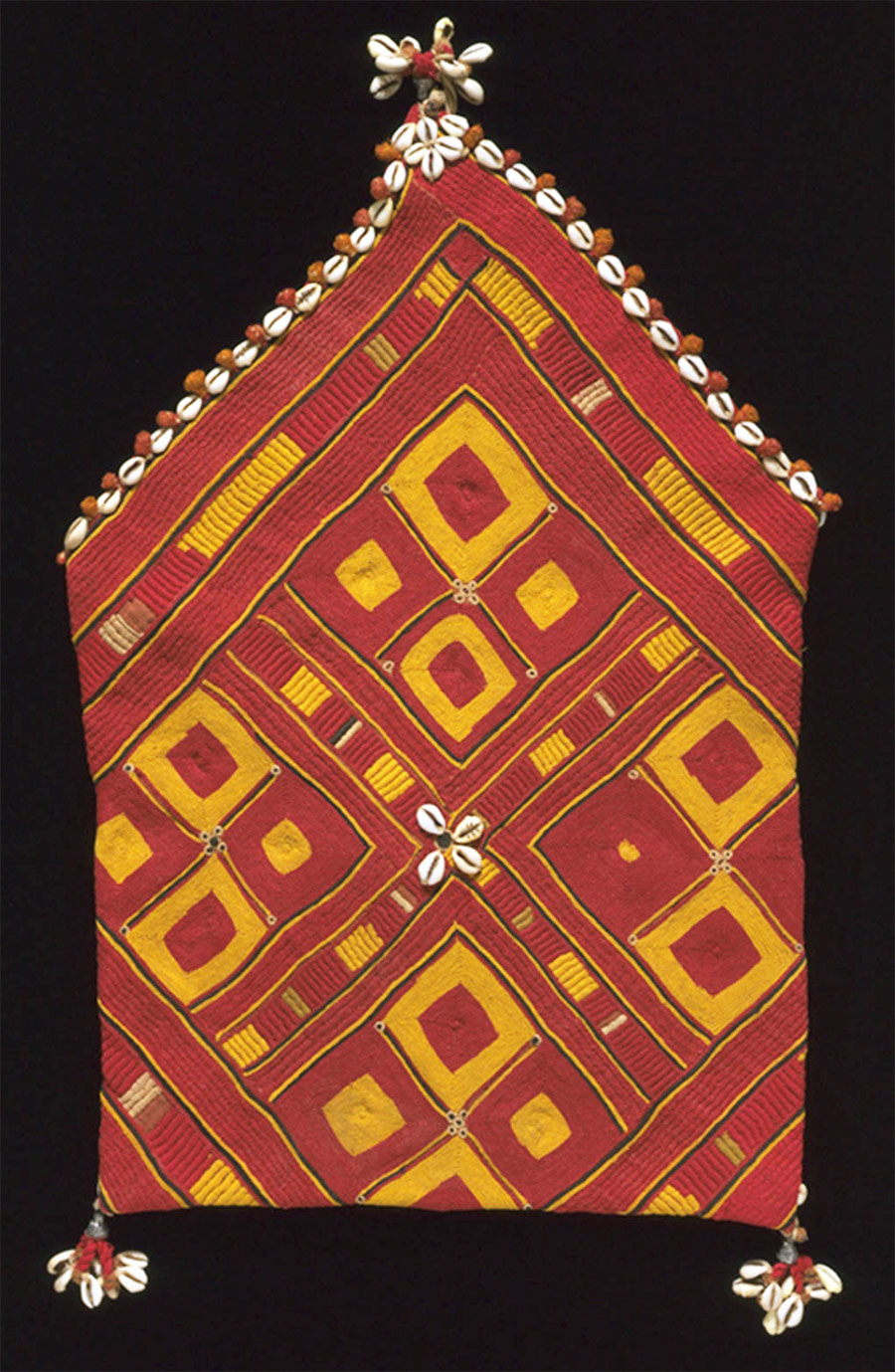 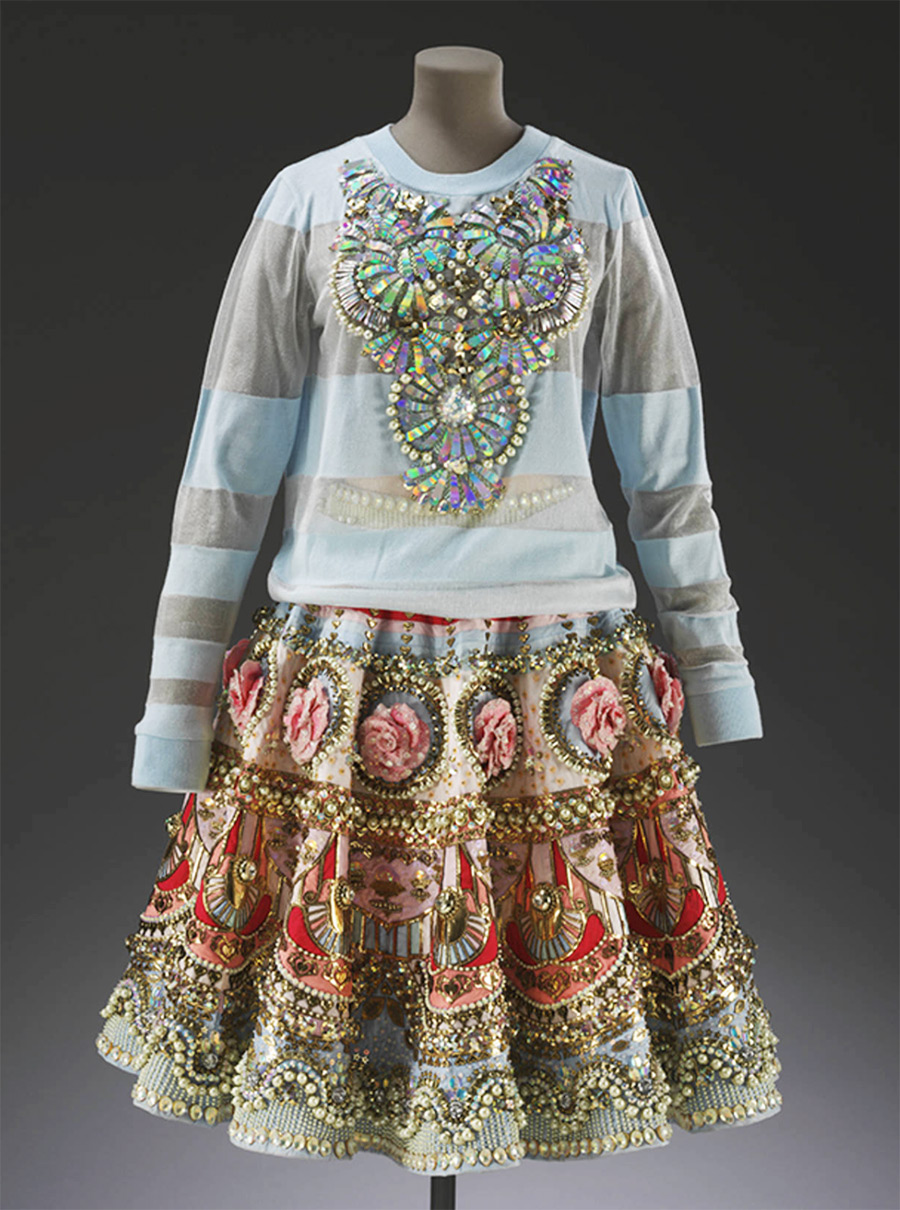 Skirt and top ensemble, applique, embroidery and heavy embellishment with crystal beads and sequins, designed by Manish Arora, made by Three Clothing Company, 2014 – 15, Noida, India. Museum no. IS.60:1 to 3-2016 © Victoria and Albert Museum, London

Today
Today, contemporary designers are adapting traditional Indian embroidery techniques to create cutting-edge fashions. Born in Mumbai, contemporary designer Manish Arora rethinks traditional Indian embroidery, applique and beading, applying these techniques with a breath-taking level of detail to create clothes that celebrate hand-making skills. The haute couture skirt and top ensemble in our collection is typical of his work, inspired by his Indian heritage but with a contemporary twist and an international outlook. The upper skirt is made from silk with gold applique, embroidered with crystal beads, pearls and sequins, while the jersey top is decorated with iridescent strips, metals and pearls.

Watch the video to find out more about Manish Arora’s work: https://youtu.be/BceP90-KwKo 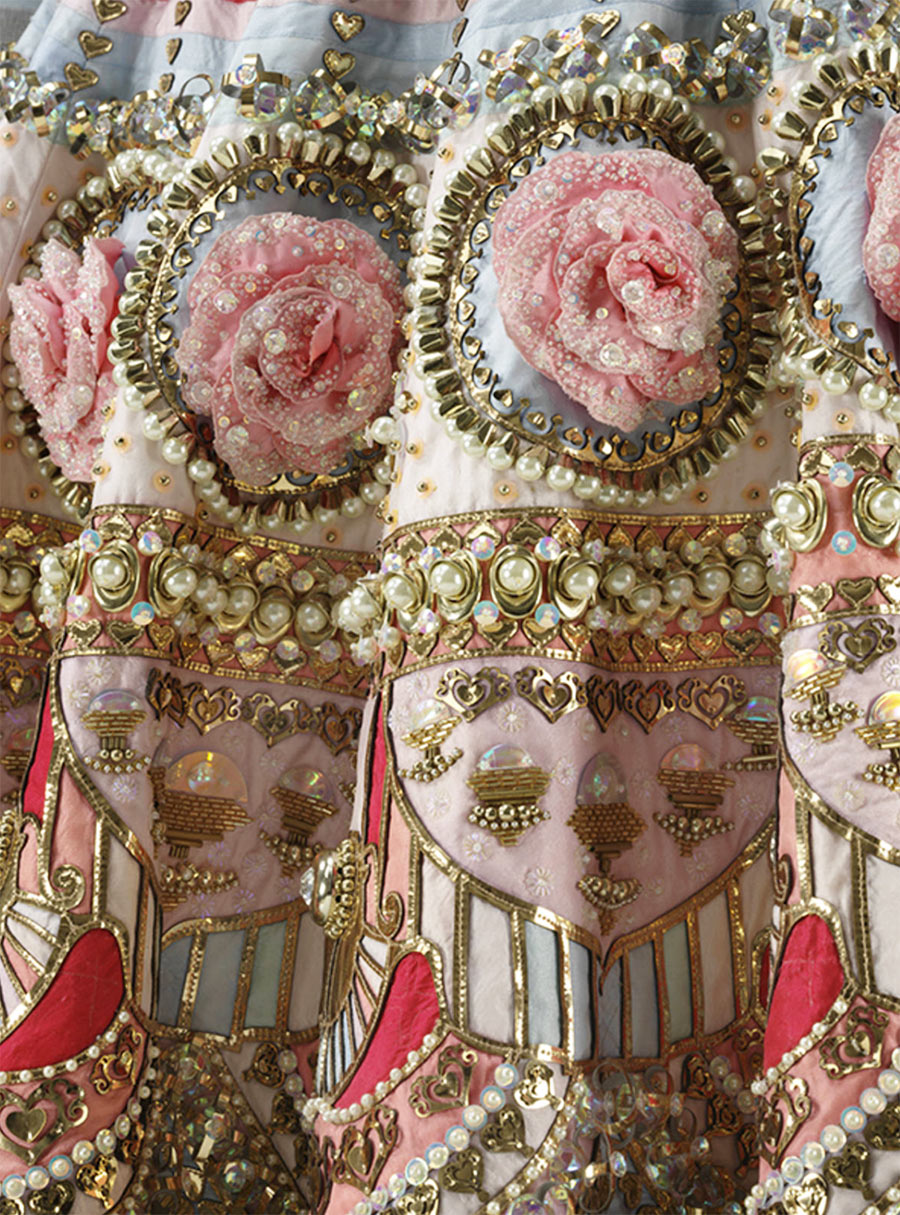