Using embroidery techniques to express your emotions, your desires, your vision of the world is a concept that is attracting more and more artists.

The Swiss Emuska – Emmanuelle Perriard – took this step a few years ago, without regrets.
He nickname Emuska comes from her career in the MDC company, a dance school in Neuchâtel (Switzerland) and now represent her brand.

An optician by trade, she was always interested in crafts in general and discovered a report on Lesage and Lemarié, Parisian houses of haute couture embroidery and plumasserie (featherwork). She literally fell in love with the embroiderers’ gesture. One hand on the slate, another below, this repetition, this rhythm which deeply corresponds to her, will change everything for her. After a first internship in Lunéville, she began classes according to her availability with Elisabeth Gasbarre Roulleau in Lyon. From one course to the next, the gesture comes back, more and more sure, controlled. “I knew I wanted to use this technique, but I didn’t know how yet.” Being a stitcher in a workshop is too repetitive. There is an artist in her who demands to be expressed! 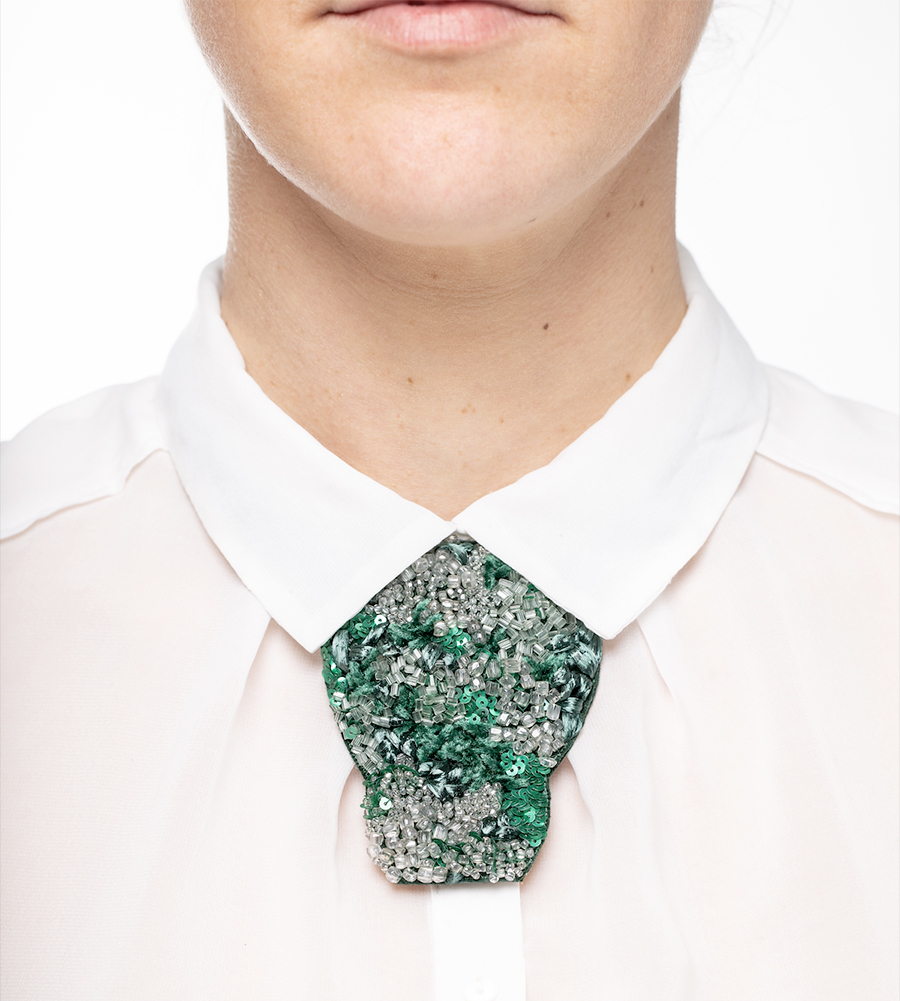 The profession of jeweler has always fascinated her and associating it with the profession of embroiderer became obvious. The idea for the Collar Jewel was born, a completely new concept. The artist mixes fabrics, sequins, beads and embroidery stitches to create a decorative object that will stylize an outfit.

The organizers of the Vancouver Fashion Week noticed these jewels and invited Emuska to present them at the show in March 2019. A slightly crazy adventure begun. Emuska found herself projected as artistic director and had to not only create embroidered accessories, and outfits, but also needed to define the mood makeup and hairstyles. For the sound of the show, she collaborated with Extrastunden, Jonathan Bürki, her sweet heart, producer of electronic music. 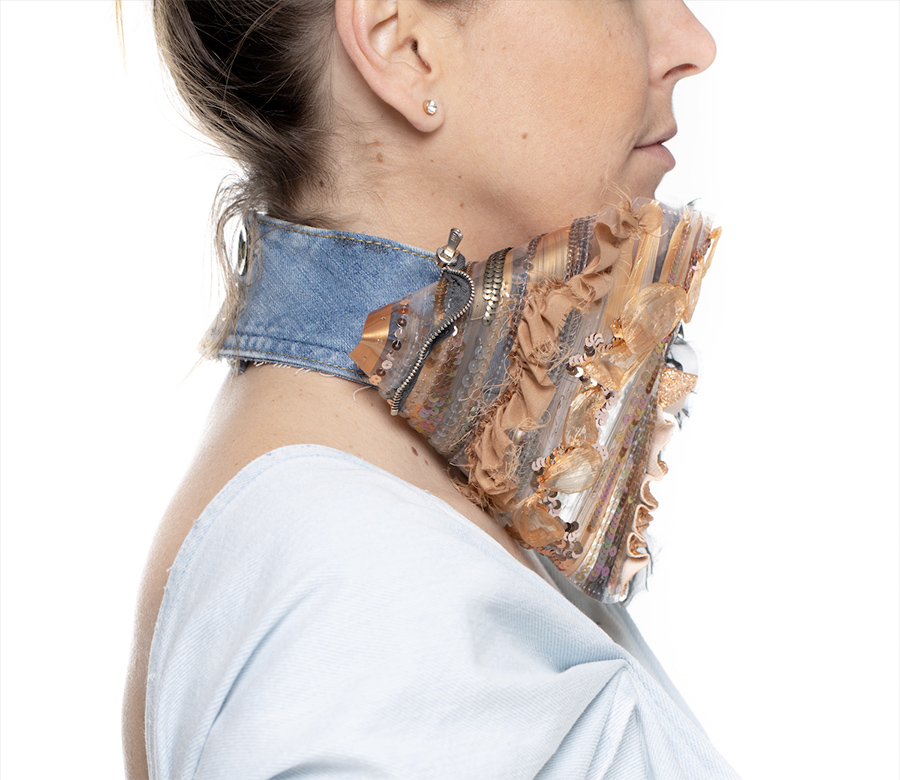 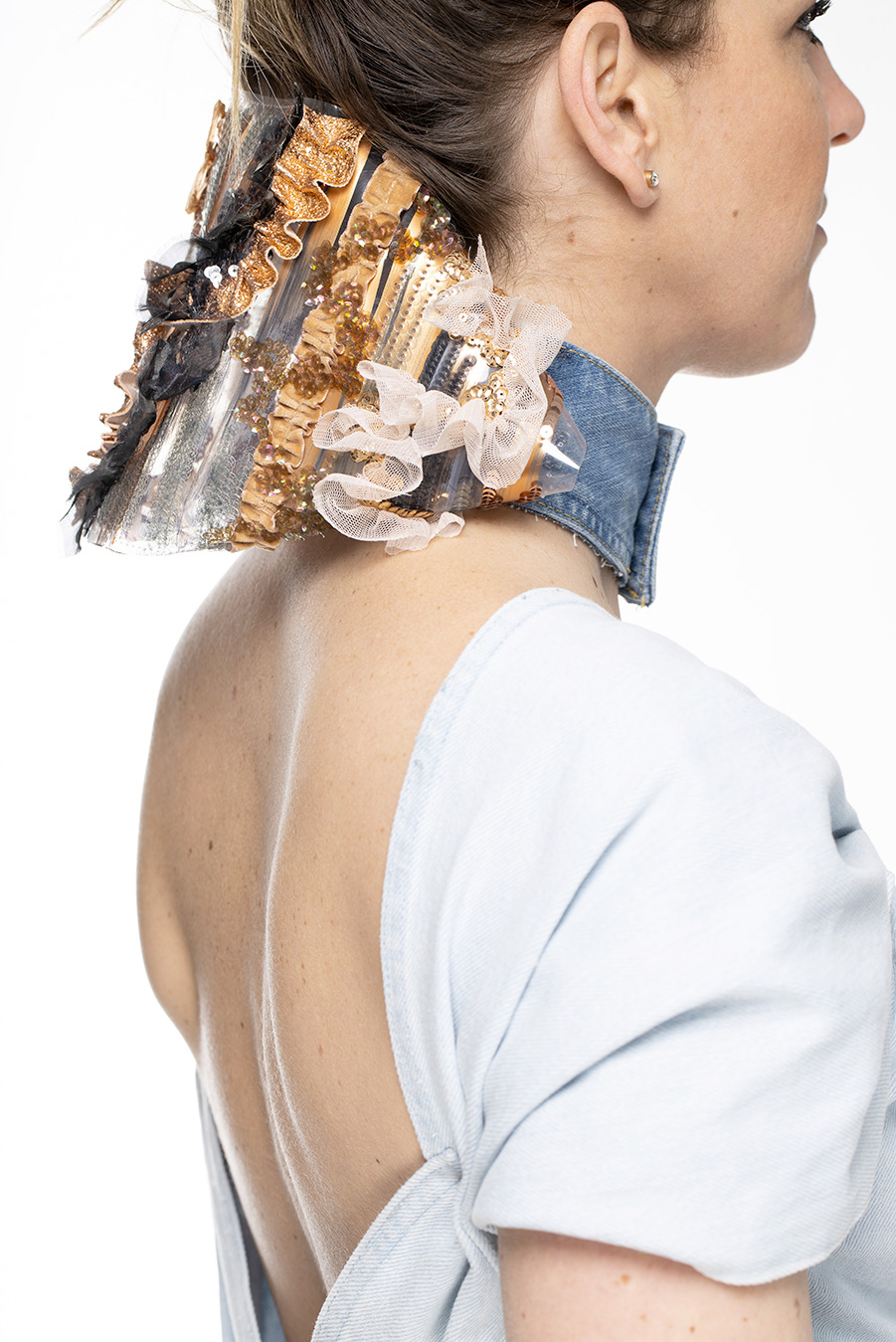 “We are Plastic” denounces a society based on overconsumption and hypocrisy. Various embroideries cover pieces of transparent painted plastic and represent common pageantry such as tie, telephone, mask, jacket hood. We also find bubble wrap in the cloth. This material becomes invasive in nature, but also demonstrates the ultra artificial side of current human relationships and this is what the artist wanted to express.
This experience allowed her to discover some inspiring creators and beautiful energies, but also to make her realize that this universe does not correspond to her at all! The spot lights and the fake attitude, very little for her.

What interests her is to participate in a universal movement that opposes mass consumption, the waste of excess fabrics and to highlight the crafts and know-how.
She defends another rhythm, more natural, where a dress can be worn for a lifetime, and not for a season, or just an evening! Each of her creations must be unique, but she likes to use materials that have already lived.
We mainly find in her work scoubidou plastic threads, cardboard glitter, pieces of balloons, various packaging, hair, wood, metal cables. It is artistic upcycling!

The textile sequence / Embroidered photo montage – on the left, the research, above the finished work, below, details © Emuska

The artist is very tactile, the material is important to her. Even when she embroiders, she often works on thick or opaque materials that do not allow her to see her work (Luneville-type embroidery is worked with a hook on the reverse side of the work, securing the beads with a chain stitch). Her fingers have to replace her eyes. She does not draw before but lets herself be guided by the material, the reliefs, the colors. “I am not trying to represent something but to express something”.
As the slate takes a long time to assemble, Emuska takes the opportunity to use all the space and often works in series: collars, earrings, necklaces until she fills the small space. Then she cuts and assembles her work. 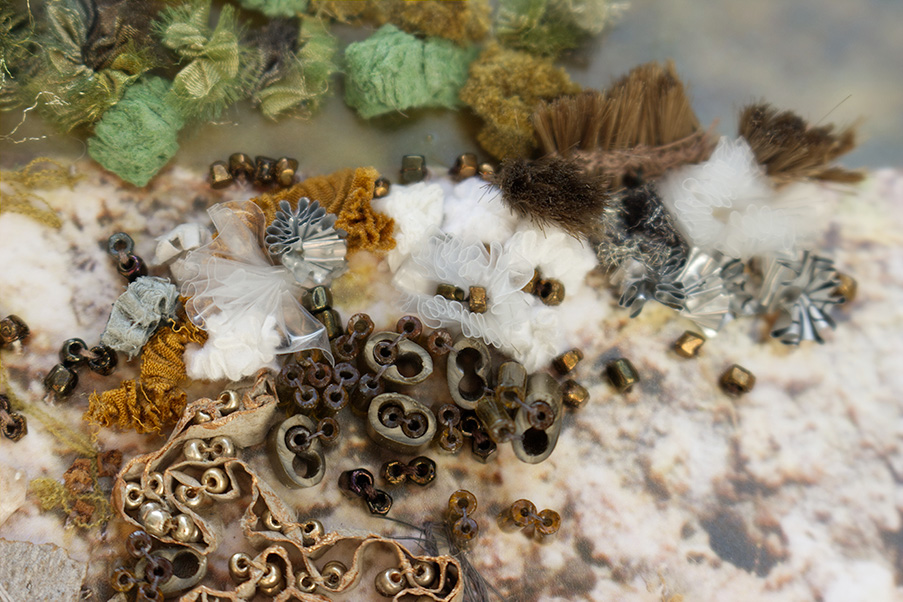 Nature takes back its rights © Emuska 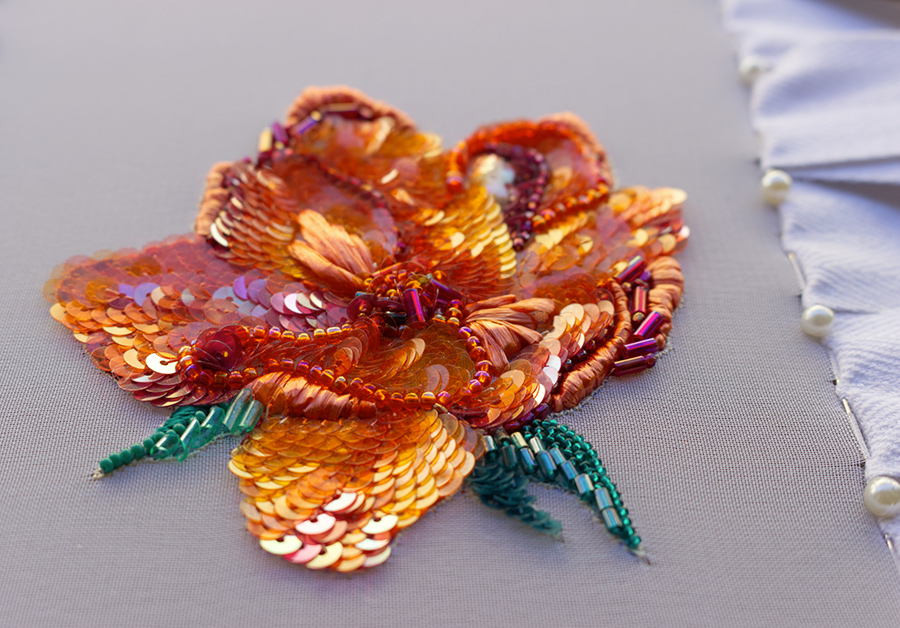 Her workshop opened in 2017. The Drôles de dames store, then in a career change situation, took an interest in her work and subleased a space to her.
This summer, she even set up her workshop outside, on the cobblestones of Rue du Neubourg, and took advantage of the astonished remarks from passers-by and tourists from all over Switzerland who were visiting the pretty city.

Emuska projects are numerous. She is currently preparing exercises and course materials to teach this art because transmission is an important element for her.

She would also like to go back to bigger pieces that resemble her, embroidered paintings, like the one designed for the “Luxembourg art prize” which denounces the setbacks and inhuman excesses of the textile chain, accessories that are more and more extravagant and colorful. 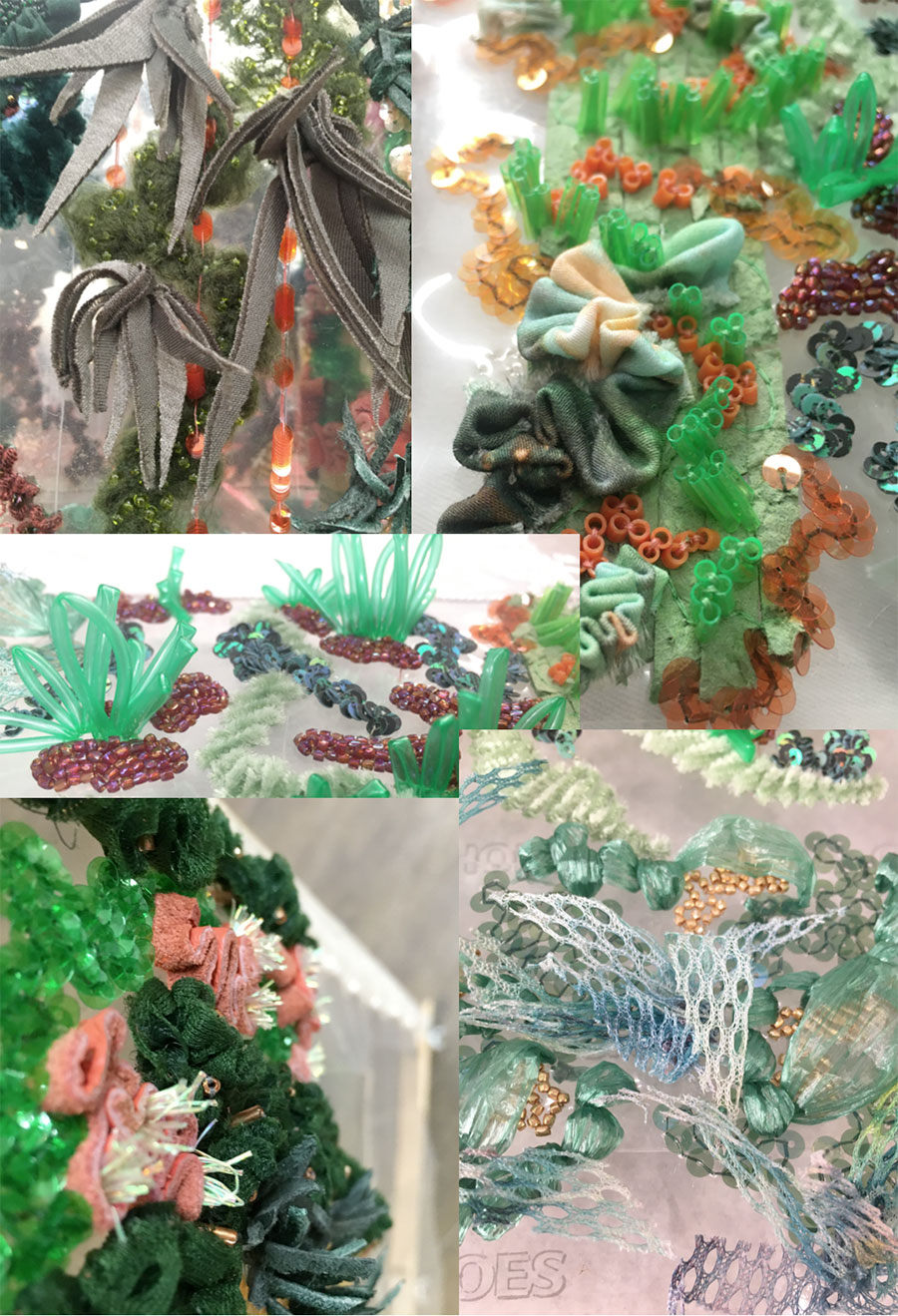 As all the planned markets having been canceled, she was selected by the team at the HQ art center in La Chaux-de-Fonds for an online sale of objects, art and Swiss design called editionlimitée.ch.
Finally, she hopes to one day be able to work as a freelancer for haute couture embroidery workshops, in the making of samples, an area where creativity is important.
Good luck Emuska!