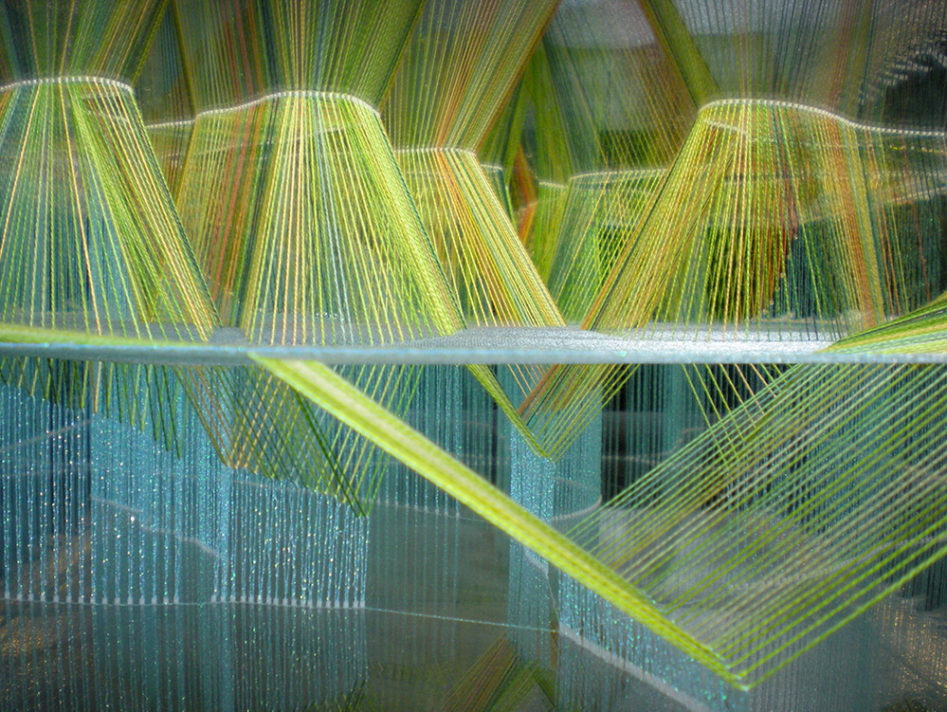 Isobel Currie (England) brings us almost literally into the world of embroidery stitches. She analyzes them as we have never seen them before. The threads unfold in space and light and reveal unsuspected links.

All photos are copyrighted. They cannot be used without the written consent of Isobel Currie. Thank you! 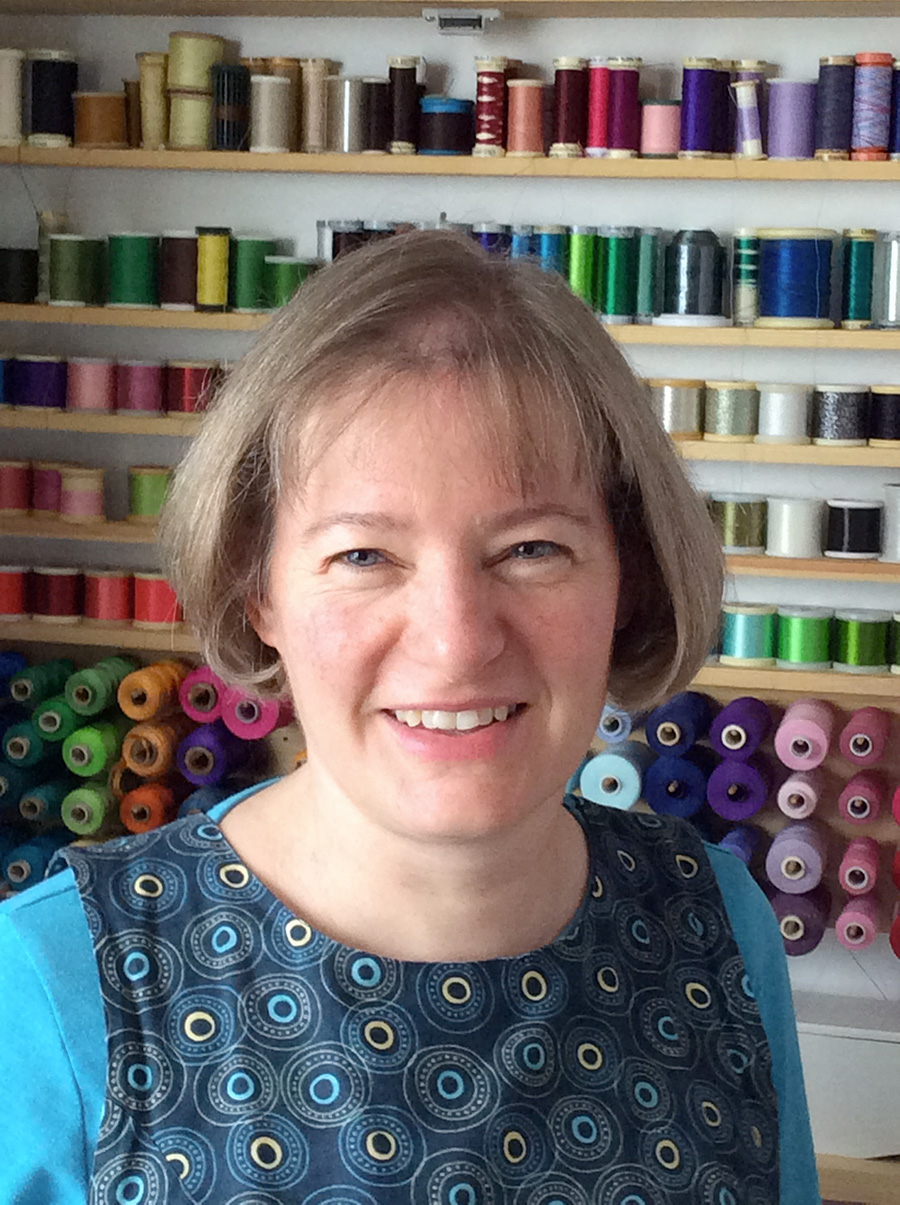 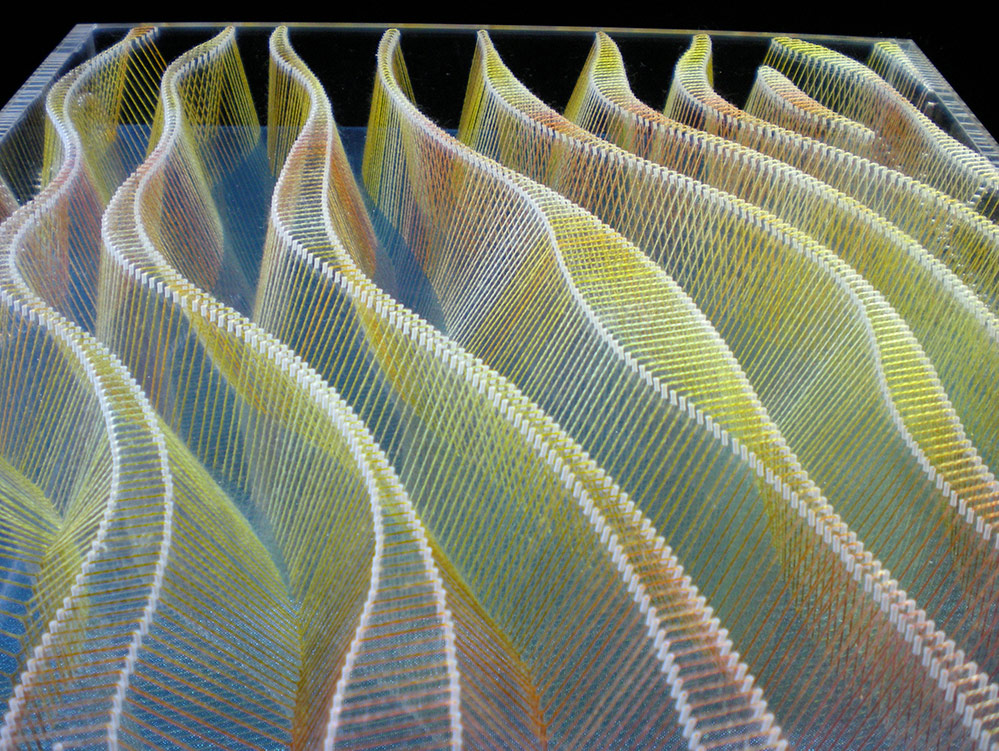 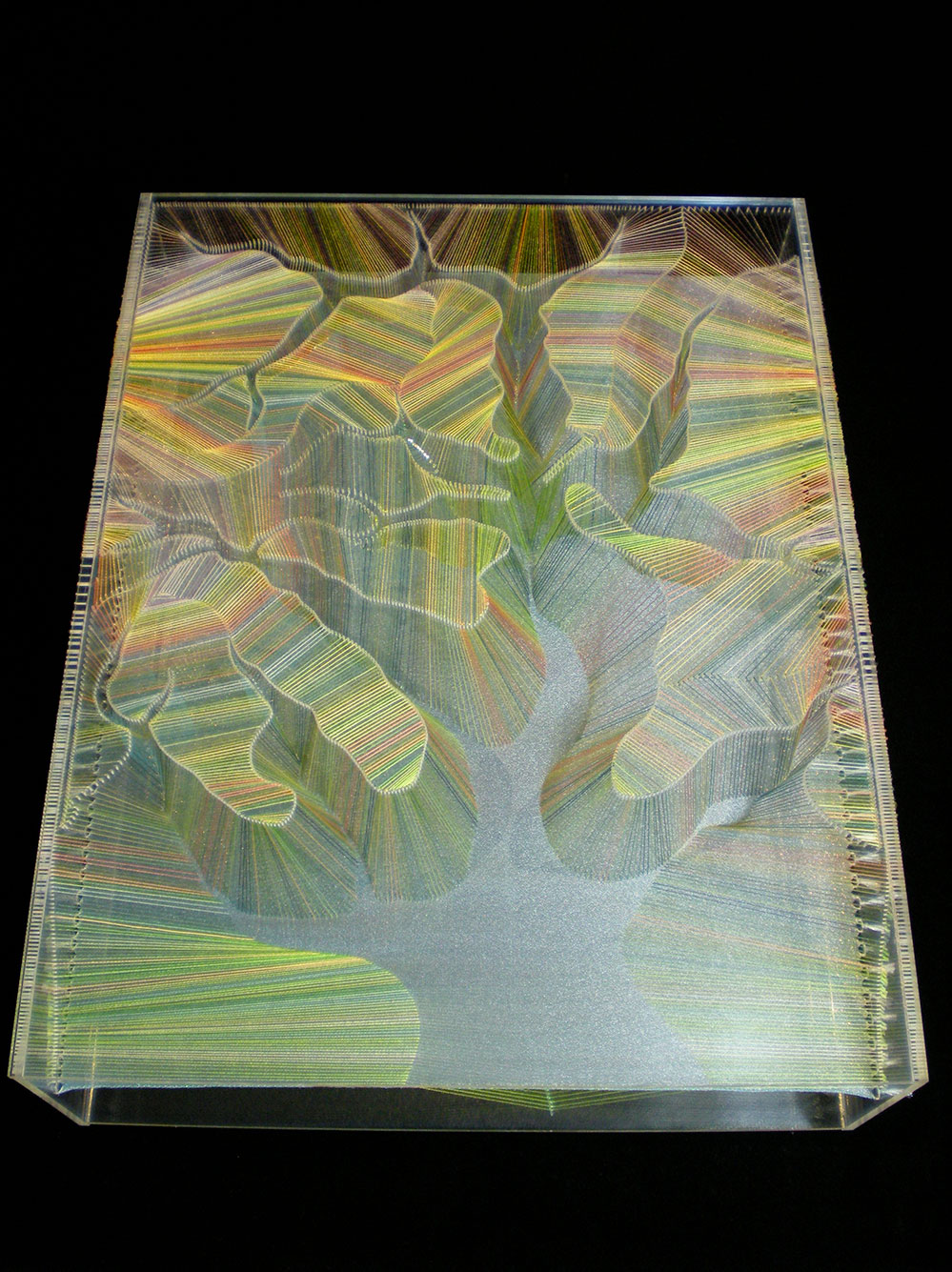 The artist is also able to see relationships which exist in the environnement that embroidery stitches can bring to life, or even unveil. For months she works to create her own sculpture of wire and glass, plastic and pearls which will reveal to us her vision.
In the excellent Charlotte / TextilArtists article , Isobel recounts the process of creating her artwork Fly Stitch Autumn Landscape. She realized that a landscape can be rendered in its three-dimensionality with threads passing through an organza fabric and transparent Perspex® panels.

The preparatory work is long and particularly meticulous. Her studies at Manchester Polytechnic can be seen here: we have the impression of seeing an architect at work – rulers, lines, eraser, ultra-fine pencil, tracing paper… Colored pencils and spools of threads remind us that we are still in the studio of a textile artist. A recurring difficulty is being able to go beyond physical limits, such as being able to embroider threads in a box or being able to pierce a plastic wall without damaging its integrity.

To play with as many colors as possible, Isobel has chosen to work with stranded cotton. She loves the idea of using the same materials that thousands of embroiderers use to create very different pieces. 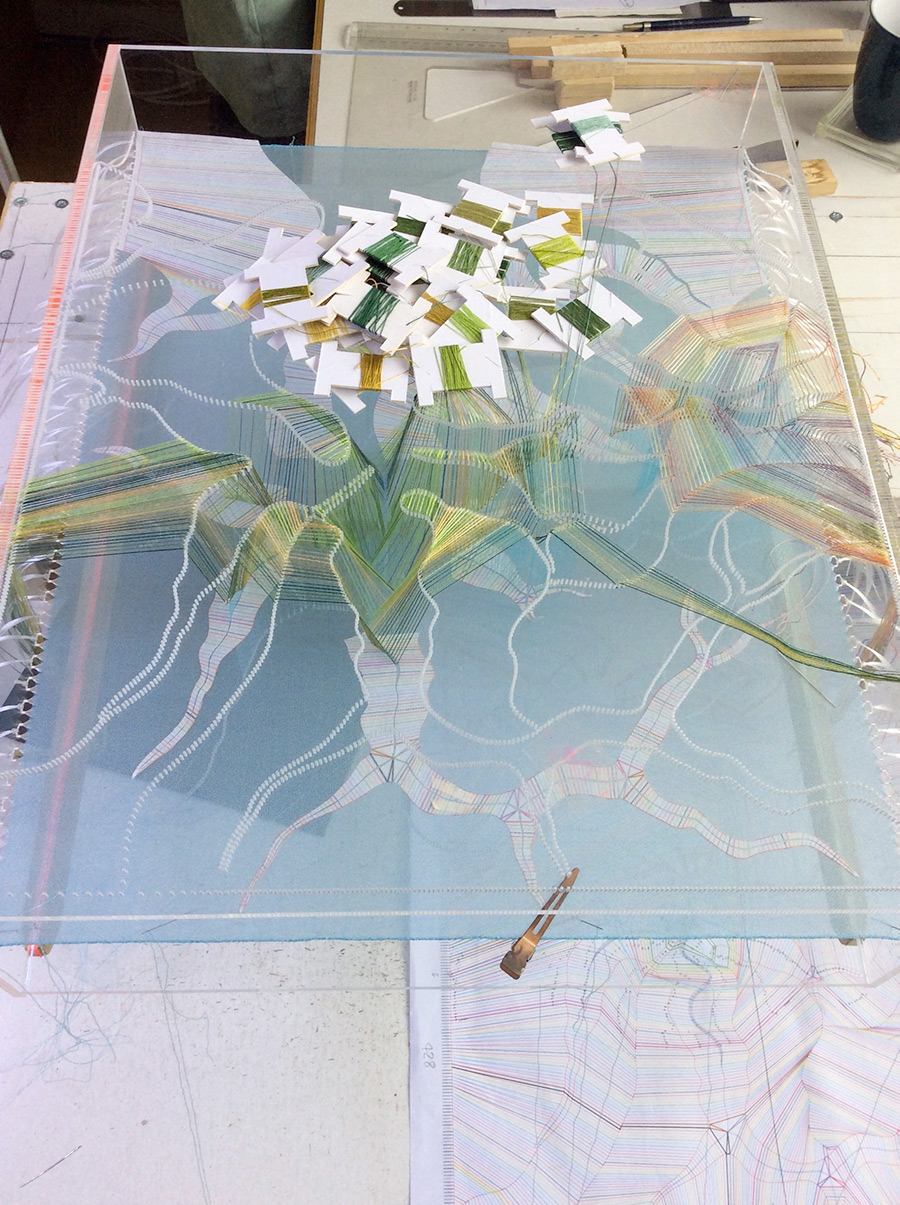 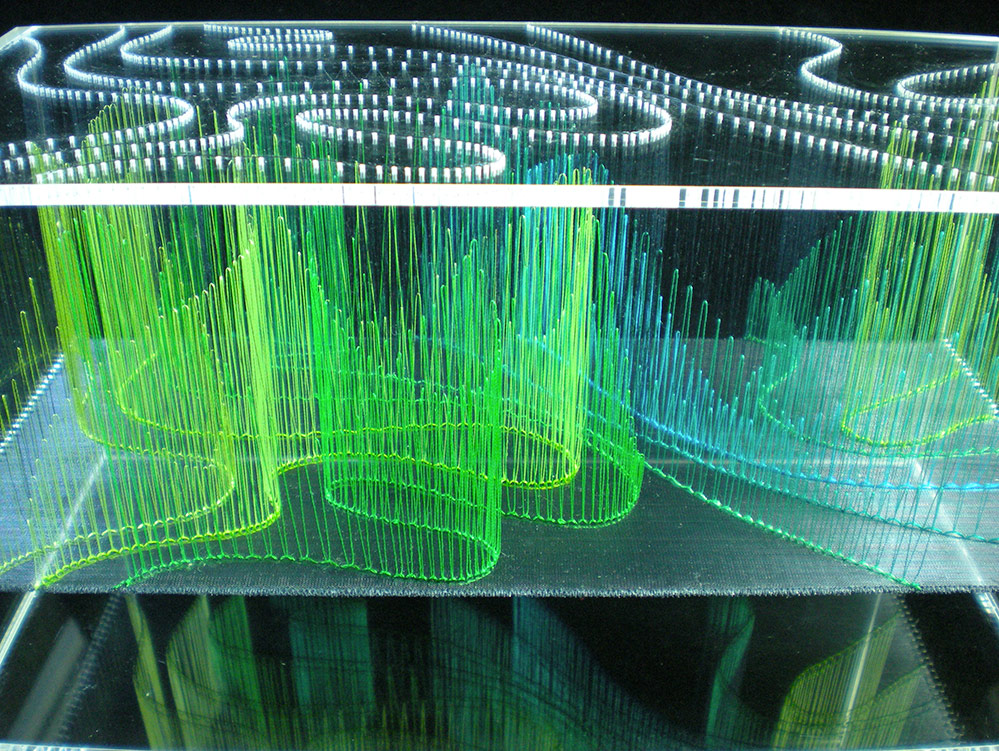 The creation of her work continues by piercing the plastic panels. The drill is fixed, it is the Perspex plate which is arranged according to the planned diagram. A simple mistake and everything has to be redone. A single work can require more than 5,000 holes – and demands more than 20 hours for this process alone. Then, it is also important to embroider the threads not in the order of the drawing, but in the order of their accessibility. Once the embroidery is advanced, Isobel cannot go back. A work can require a year of work.

Isobel does not sell her works – too unique, too personal, carrying so much effort and discovery … However, she does accept commissions.

“All of my work is a three-dimensional exploration of the nature of stitches. It’s like a long period of investigation around a central idea. Each work addresses a new stitch – as I spend months there it is important for me to vary! But I also sometimes pick up on an old stitch, an old idea that I develop differently. “ 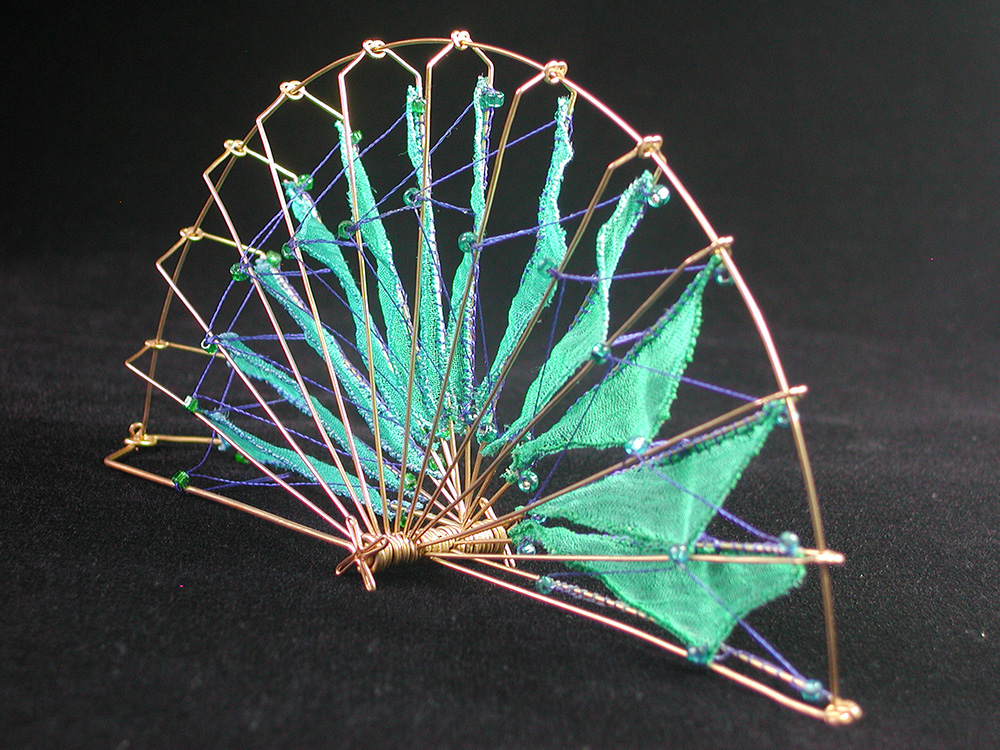 How did you come to this creative form?
Since my childhood, my main interest has been embroidery, sewing, textiles. So I followed this branch at Manchester Polytechnic. I also had the opportunity to study metalwork in the Department of Three-Dimensional Drawing. I found this training very interesting and it has influenced me deeply. I then began to create three-dimensional stitches with wireframe and my final presentation in 1990 was based on this idea. I continued to explore this idea for years, experimenting with different materials to come up with the result I was looking for. But it was not until 2010 that I found and mastered the transparent plastic panels that could both enhance my designs and go perfectly with my threads. Of course there are always adjustments, new discoveries, advances – and I hope that will always be the case – but I think I have finally found my tools. 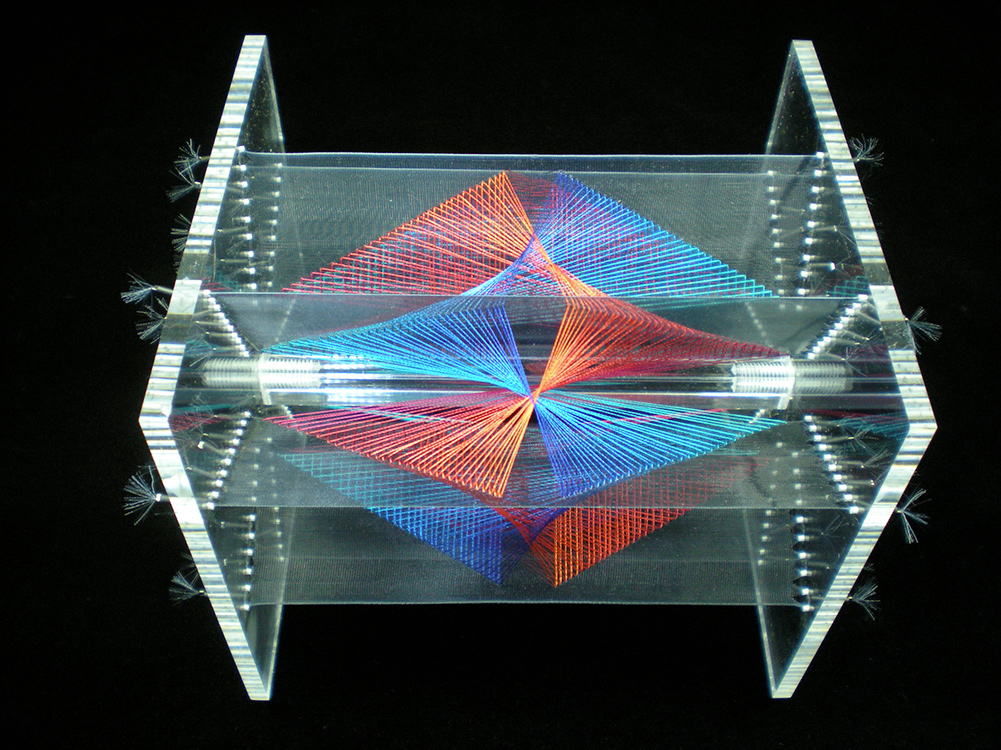 Do you practice other art forms?
I have tested many other textile arts which all have had an influence on my art. They gave me a wide range of techniques and tools that I can still use. I make clothes (which in itself is a form of 3D art!), I also create jewelry and beadwork.

Does your lifestyle influence your art?
Time is an artist’s most precious commodity, especially when the techniques used require a lot of work – and for the past few years I have been very fortunate not to have to work in order to live. I give all my time to my creation, which allows me to produce more. My job requires a lot of attention and time and it is very frustrating to have to stop all the time. I also work at home – which takes a lot of discipline, but gives me the opportunity to create whenever inspiration strikes.

Who are the artists who influence you?
The one who has the most influence on my work is probably Bridget Riley with her geometric shapes, her subtle color changes. Paul Klee’s beautiful idea “A line is a stitch that took a walk” touches me, as does his way of working with juxtapositions of colors that look, to my eyes, like embroidery and quilting stitches. Finally, I will also cite Alexandre Calder for his work with metal in clear lines and his mobiles floating in space.

Does the world around you inspire you?
I’ve never traveled a lot but I find a lot of inspiring subjects around me, especially nature. Today, beautiful images of the world come to us via the Internet and I can also draw inspiration from them. I see everything through the lens of my art!
Colors are essential for me, I always notice their changes, their juxtapositions. I am a synaesthete, so I automatically and unconsciously attribute color to everything, especially abstract concepts. I know early in my creative process what color a shape will take. 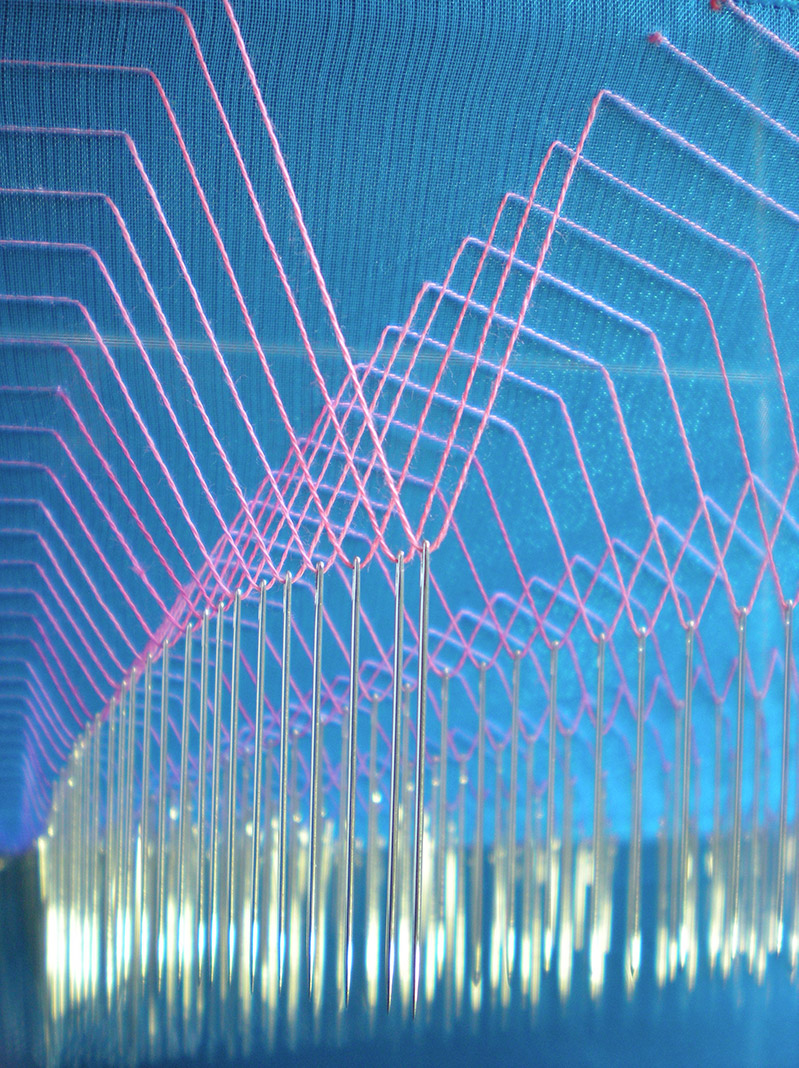 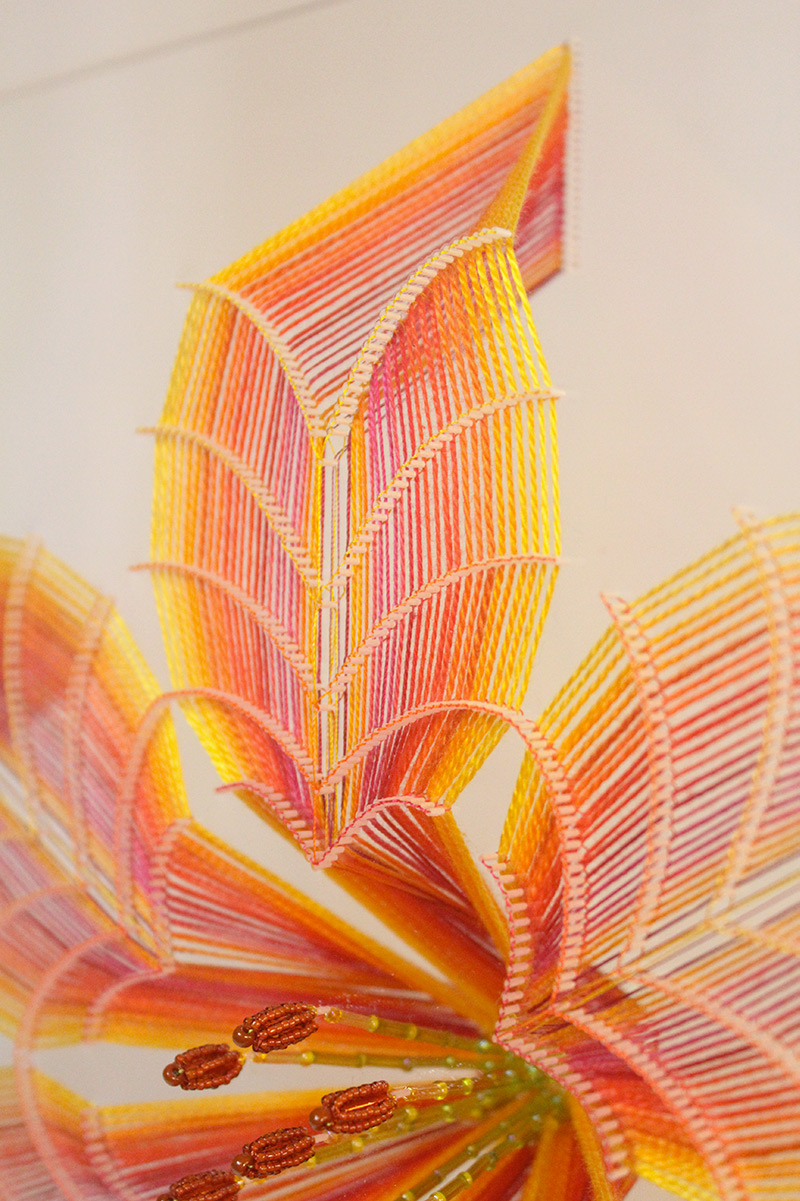 With such a long process, do you sometimes feel frustrated? Can you work on several pieces at the same time?
Yes, I sometimes feel that particular frustration, especially at the beginning, when preparing the piece because then I have a lot of other ideas coming up that I wish I could try! But once I’m embroidering, I’m completely absorbed in my creation, in the evolution of shapes. I’m working on one piece at a time, but I write down my other ideas in a separate notebook, so I can come back to them later.

What is your definition of an artist?
Above all, I would say that artists first create for themselves. It is a necessity, they have to create, even if no one sees it, even if the work is not going as they would like, because they have an urgency in themselves, a need to create that is too strong.

Your work is both masculine (physical strength) and feminine (emotion), thus giving an open finish to both. Are you aware of this? How do you see it?
This is an interesting question that I had never thought of. My work has always revolved around rather technical drawings, which could perhaps be considered more “masculine” in the past. But I hope that the move towards a more neutral world at this level will lead to the disappearance of this kind of idea. This is my native way of thinking, but it can be interesting to surprise people who have what I would call “historical” expectations of textile art as being female art.

Do you dream of creating a very large artwork where people could walk through your colored threads?
Maybe someday I’ll do bigger works, but for now I’m happy to stay in small dimensions, which require people to come closer to see the details.
There are already several artists like Gabriel Dawes who creates magnificent and immense works using colored threads. My work explores the stitches of embroidery, not just the lines of the threads, and if I was to make larger pieces, they should reflect this theme. 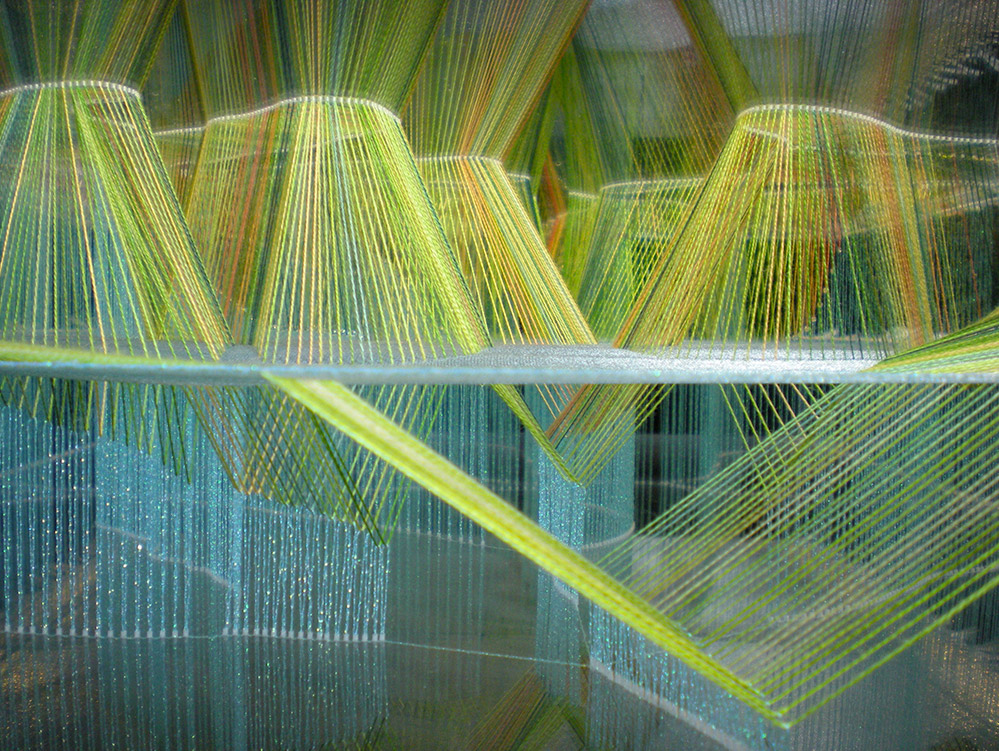