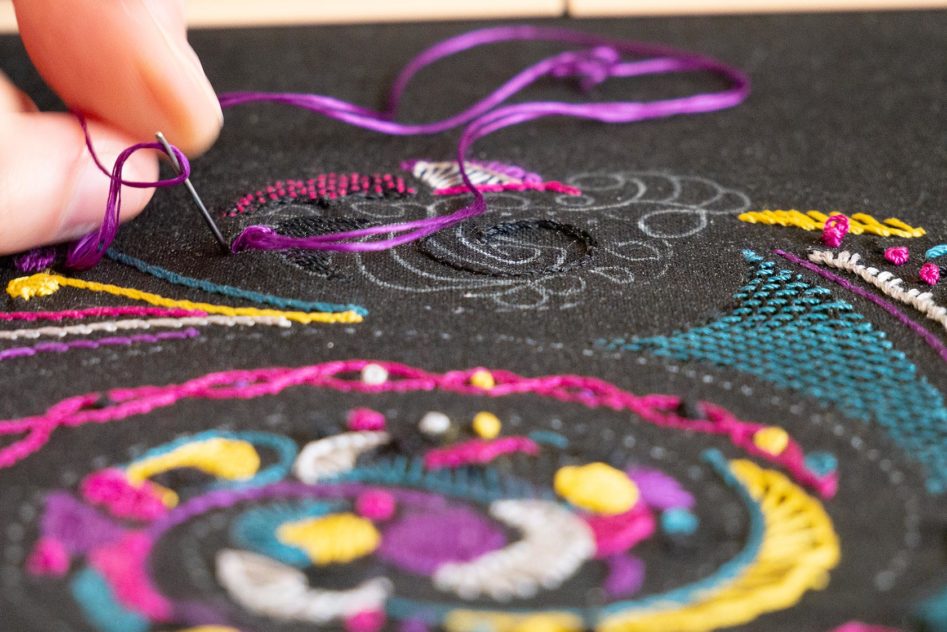 Soline Charton is one of those precious bees who forage on all kinds of flowers to create different honey each time.
The threads, the needles, Soline has practiced them since her young age. At 10 she even began to take bobbin lace lessons, and at 20 she learned styling and pattern-making to sew her own clothes. She took costume design lessons while preparing her Masters in Art History. She worked for several months at Balmain and Givenchy then several years at Chanel. She got a CAP in Haute Couture Hand Embroidery. 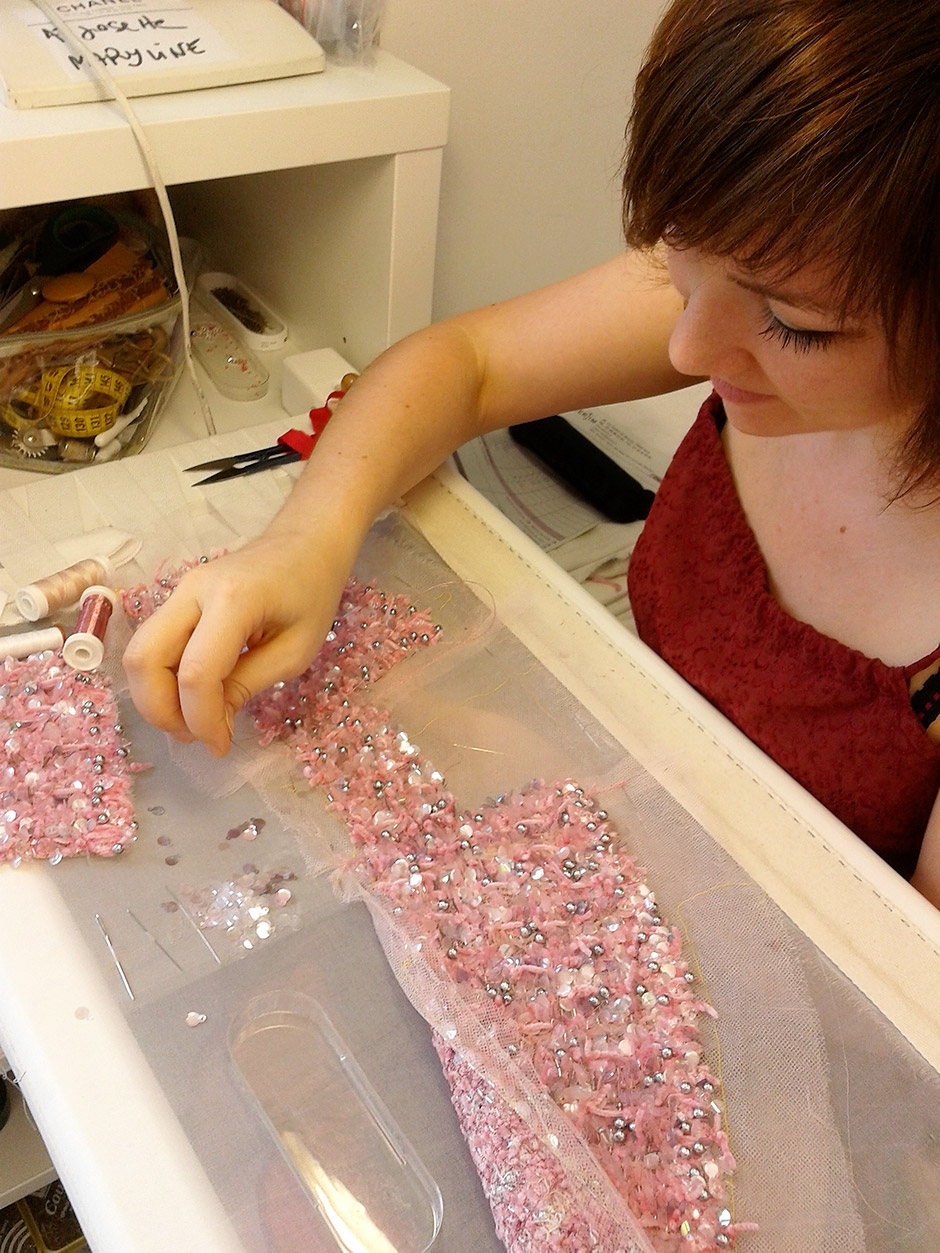 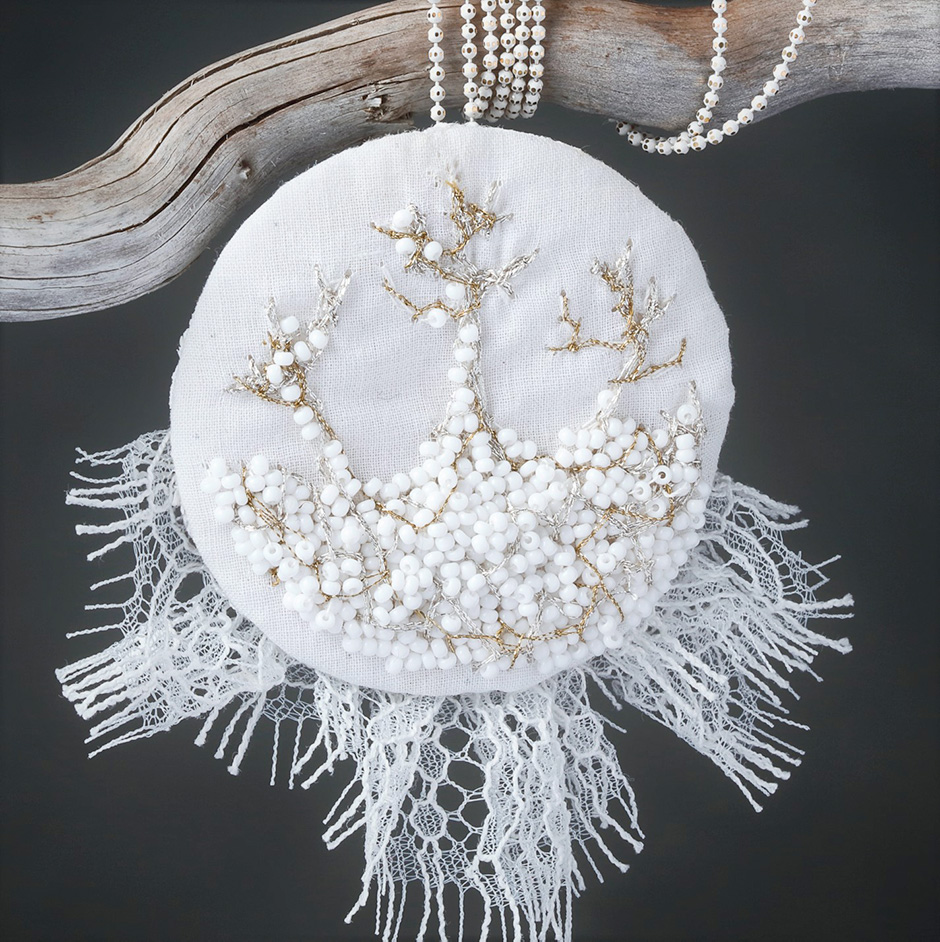 Then she felt the life in the country was more adapted to her, and in 2017, she founded her workshop-boutique a former presbytery (with a view of the Château de Villandry and its magnificent gardens). She named it “Soline du Puy”. Having learned that one of her great-grandmothers was a lace maker in Le Puy-en-Velay, Soline wanted to pay tribute to her while remaining part of a lovely family tradition.

As an embroiderer in a haute-couture house, Soline knows the long days well, especially at the time of the shows: it is not uncommon to embroider 60 hours a week. Sometimes the house even hires a masseur to help the artists! 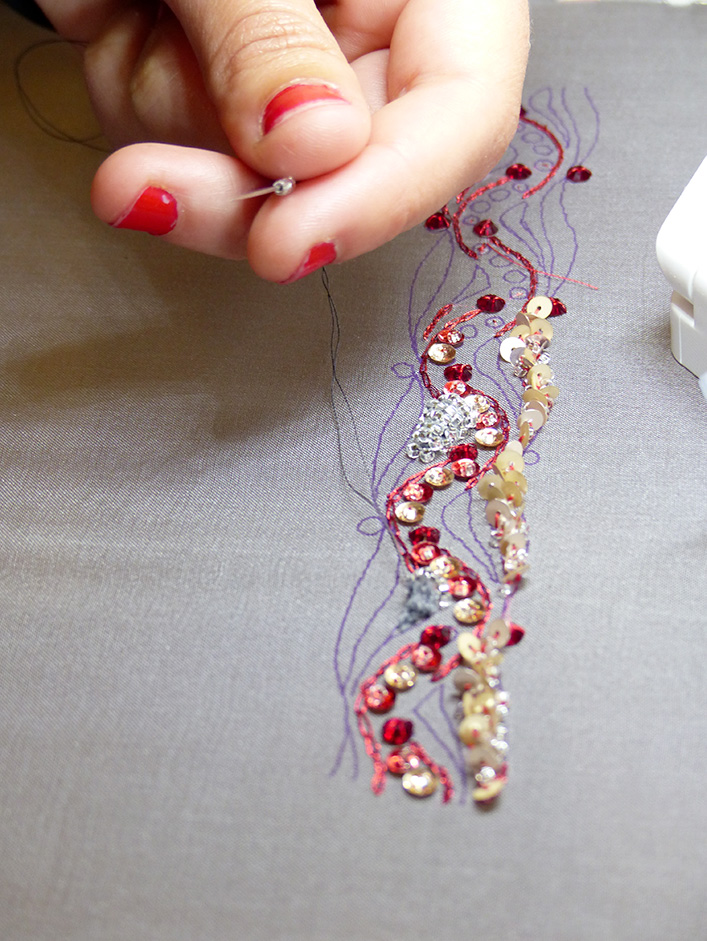 As an independent craftswoman, she had to learn to manage creation and administration side by side. A “juggling life” which suits the jack-of-all-trades character of our artist.

Soline is influenced by very diverse horizons: from the primitive arts to Orientalism, from the beginning of the 20th century, to the bohemian movement. She is fascinated by historical pieces (Palais Galliera) but then likes to divert these materials, these ideas, to produce her own works. This ability to capture a wide choice of inspiration is reflected in the variety of techniques used by the artist: lace, embroidery, sewing, creation of artificial flowers, feather work. “I learned many techniques to be free and able to achieve what I have in mind.” Soline rarely has a single project open: at the moment there are even six slates awaiting the fingers of the lace-embroiderer.

Even though the past is a great source of inspiration, Soline is also a subscriber to Ateliers d’Art de France: “It is important to be part of your time when you create.” Without forgetting the Fashion collection, at Edition Taschen, and Fashion in detail of the V&A Museum.
Despite all these achievements, Soline continues to learn: recently ribbon embroidery and soon gold embroidery which she wishes to know better. We can easily guess that very original creations will emerge from these new encounters!
In the hands of the young artist, the “living heritage of rare know-how” has a very bright future indeed! 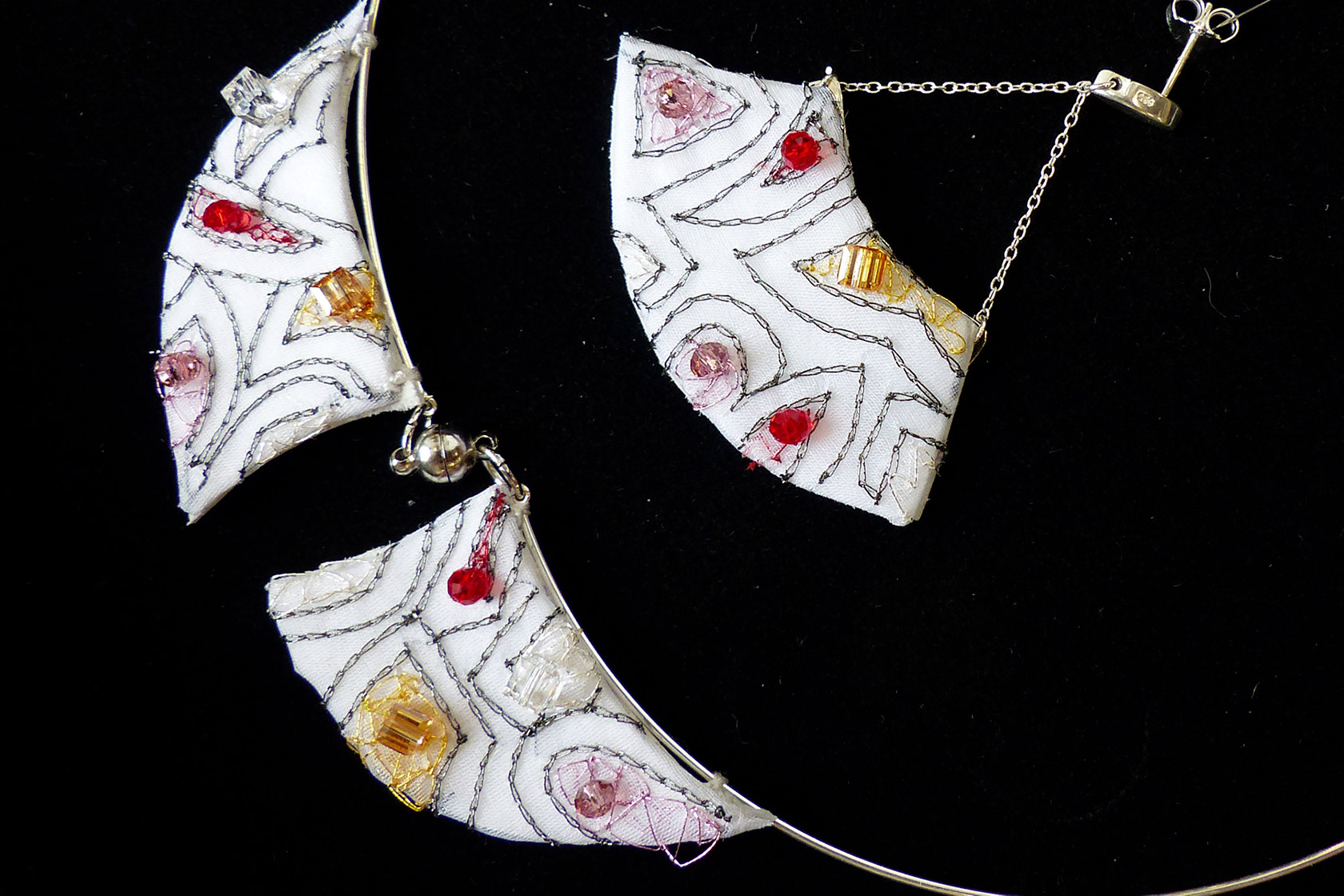 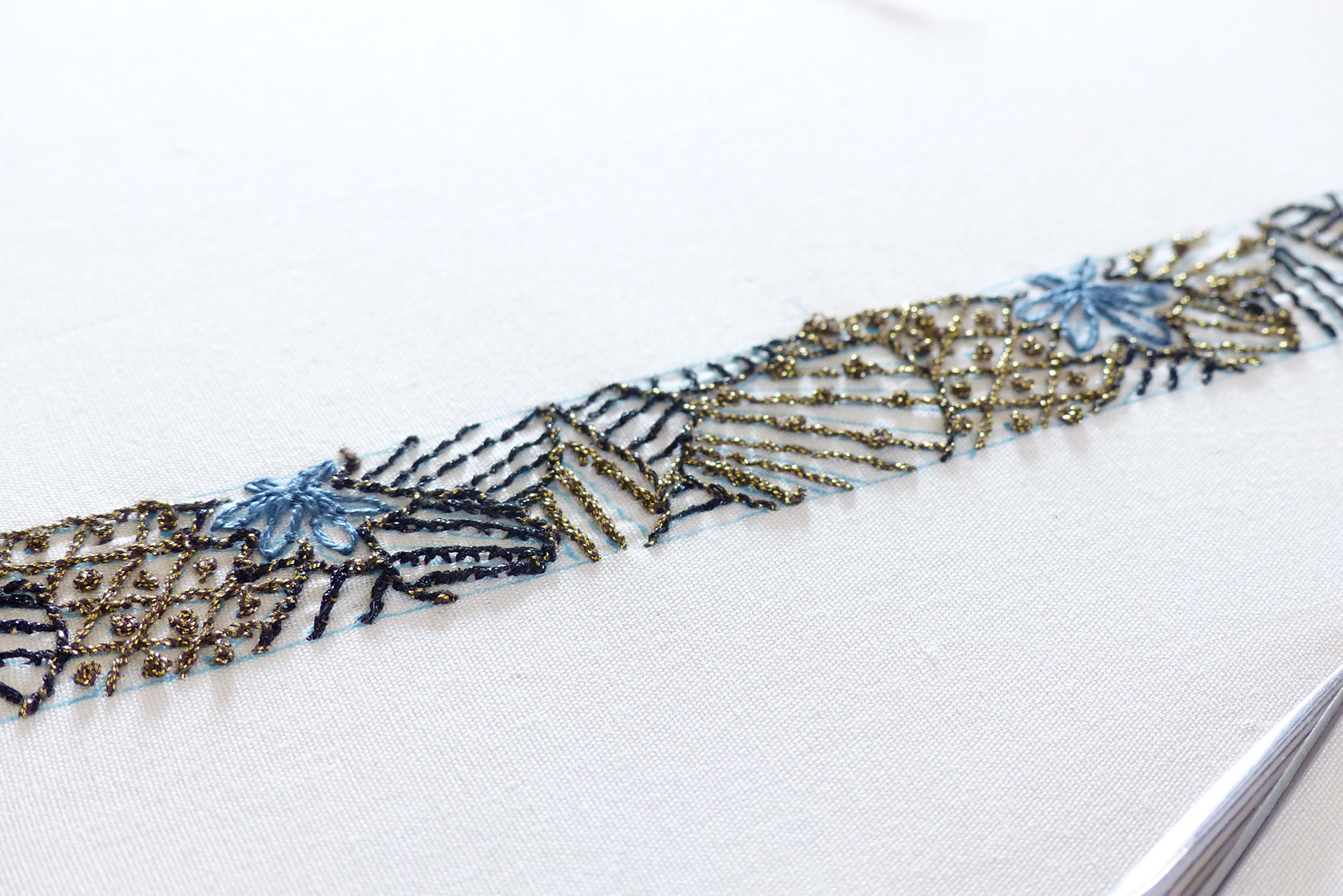 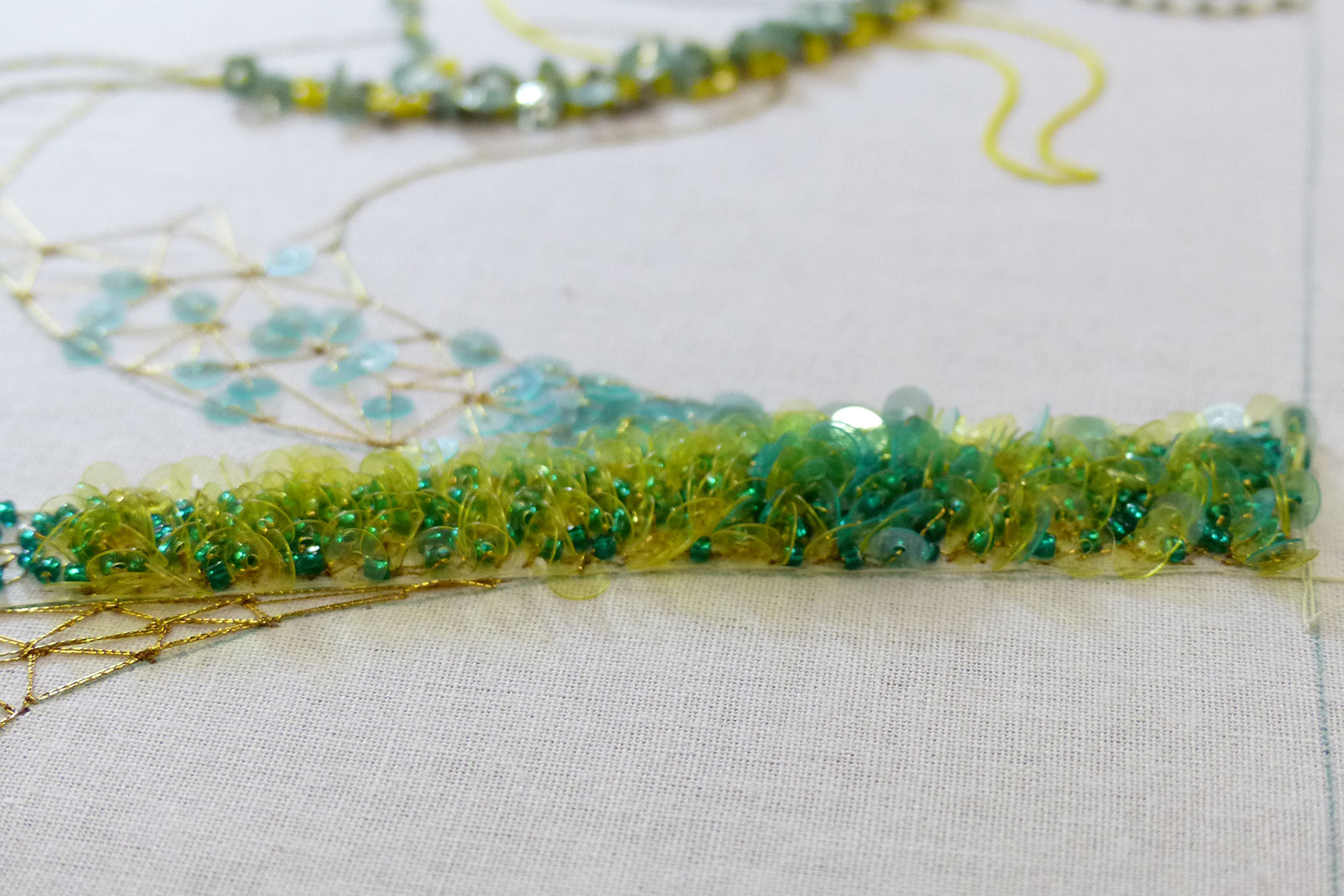